Dr. Waller O. Bullock Jr. was one of the earliest members of the Pine Mountain Settlement School Board of Trustees, as indicated by his name among the trustees listed in letterheads of School correspondence dated November 1915 and January 1918. He already had an association with the School as the husband of co-founder Katherine Pettit‘s sister, Minnie Barbee Pettit.

As the medical advisor to the School, he was surely a valuable resource for the founders, Katherine Pettit and Ethel de Long, who were planning extension centers that would expand their health and education programs into the Pine Mountain valley, beginning with Line Fork Settlement and the Medical Settlement at Big Laurel.

Dr. Bullock attended Transylvania University and graduated from the University of Virginia in 1896, followed by work at University of Virginia and an internship in the Polyclinic Hospital in Philadelphia. He located in Lexington in 1899 and continued practicing medicine until 1946. During World War I he served as a major in the Army medical corps known as the Barrow Unit and later helped found the Lexington Clinic with Dr. David Barrow and his son Dr. Woolfolk Barrow. The clinic continues today as one of Lexington’s top healthcare providers.

Minnie Barbee Pettit was born in 1877 and grew up on the same farm outside Lexington as did her sister Katherine. The description of Bullock-Pettit photographic collection at the University of Kentucky Libraries includes the story of how she met her future husband: “While traveling in the Kentucky Mountains with her sister Kate she broke her leg; Dr. Waller O. Bullock, who she later married in 1907, set the leg.” Throughout her years in Lexington, Mrs. Bullock was an active member in a number of cultural and gardening organizations.

Several letters in the PMSS Collection suggest that School staff continued to keep in touch with the Bullocks at least into the late 1940s. A 1921 letter written home by Marguerite Butler, a fundraiser and superintendent of the extension work, tells of Katherine Pettit consulting her brother-in-law, then in Lexington, KY, about another worker’s bad leg.

A 1945 letter from Dr. Alfreda Withington, the School’s medical settlement physician from 1924 to 1931, to Delia Creech (William Creech‘s daughter-in-law) mentions “Mrs. Bullock.” Miss Alice Cobb, a teacher and trustee, relates the following in her 1942 travelogue:

Sunday, January 18th [1942]. Took train to Wollaston, met by Mrs. Bullock and son Robert. The meeting of the Children of the American Revolution was at her home.

And Margaret Motter, teacher and publicity representative, describes in her travelogue notes a meeting with “Mrs. Bullock and Mrs. [Fanny] Gratz” as late as 1948.

Waller Overton Bullock, Jr. died on  January 23, 1953, in Lexington and was buried in the Lexington Cemetery. Minnie Pettit Bullock, daughter of Benjamin F. and Clara Barbee Pettit, died in 1970. She was 98 years old. 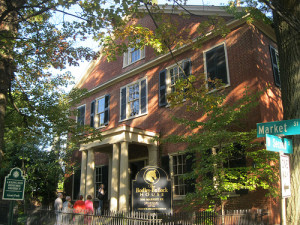 Since approximately 1814, when Mayor Thomas Pindell built the Kentucky Federal style Bodley-Bullock House, the building had many owners including General Thomas Bodley, a prominent Lexingtonian and war hero in the War of 1812. Waller and Minnie Bullock purchased this stately house in 1912, just a year before Pine Mountain Settlement School was founded.

An excerpt from “The Bodley-Bullock Coverlet Collection” in the Katherine Pettit – Weaving at PMSS – Beginnings page on this website describes the lively atmosphere in the Bullocks’ residence:

…The home was obviously an active intellectual scene, filled with books and art, enjoyed by the patriarch, Waller O. Bullock, Jr. his wife and children. Bullock, Katherine Pettit’s brother-in-law, was a doctor and a sculptor. He knew well the education of joining head and hand and heart, and no doubt passed that along to his children. The home, located adjacent to one of Lexington’s most impressive parks, Gratz Park, is surrounded by the homes of other intellectual and Progressive elites and was a center of early cultural activity. Individuals such as Henry Clay, the early entrepreneur William Gratz,  John Wesley Hunt, the first millionaire west of the Alleghenies,  and others had enjoyed the many stately homes on the Park. Pettit often came to stay with the Bullocks and it was there in a small garden apartment that she died in 1936.

The Bodley-Bullock House was willed to Transylvania University and is now leased to the Junior League of Lexington, Inc., which is committed to its preservation through renovation and ongoing maintenance to this day. Many of Bullock’s sculptures can still be seen at the Bodley-Bullock House.