Lewis Lyttle ( ) – A Key Player in the Founding of PMSS 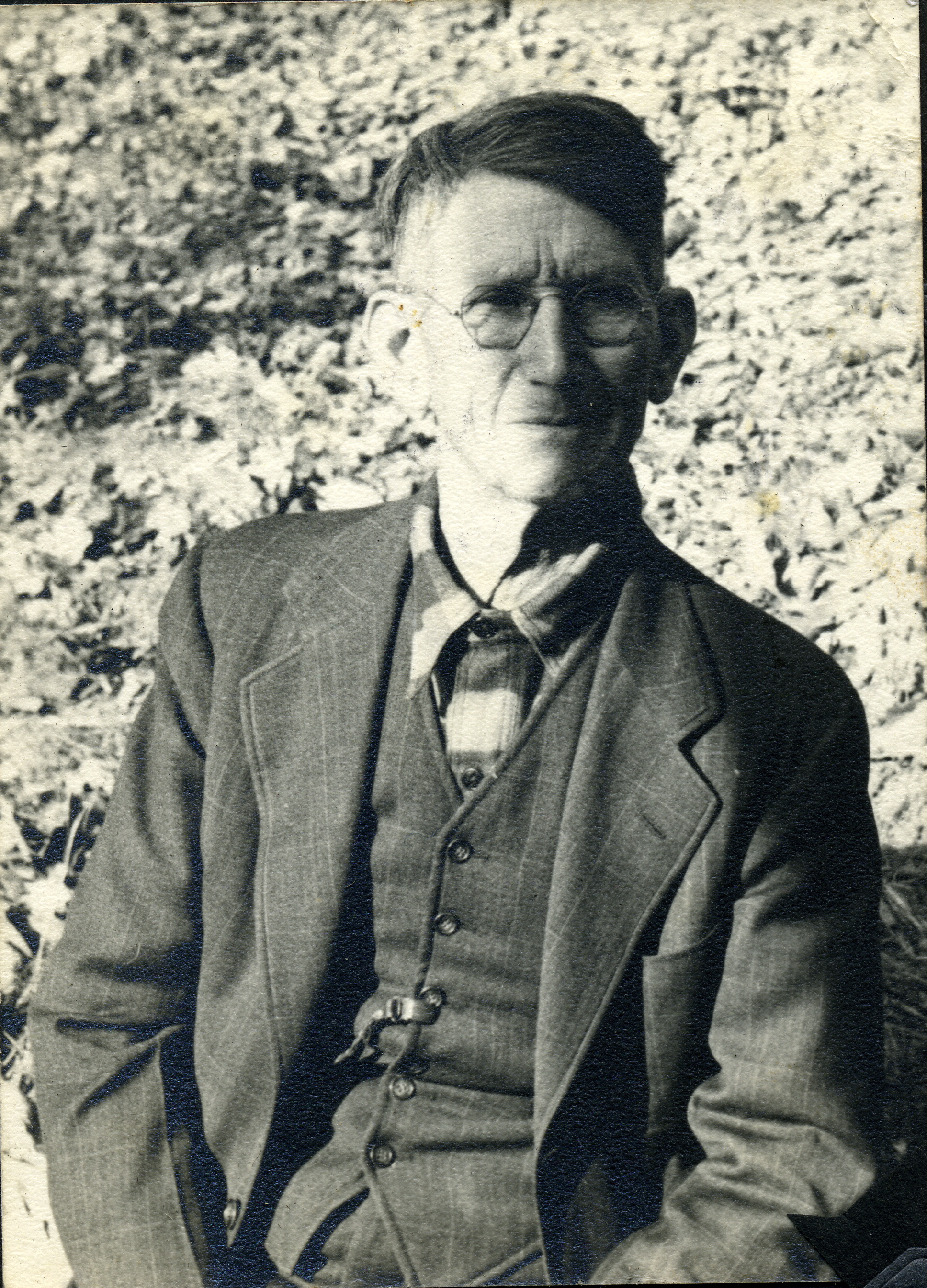 Reverend Lewis Lyttle, an itinerant Baptist preacher, knew intimately what he was writing about in his 1911 letters to Katherine Pettit. During his visits to the Pine Mountain area as a mountain missionary attending to the spiritual needs of the community, he learned firsthand the severe educational, medical, and cultural needs of the people. His letters were impassioned pleas for Pettit to consider building a new school on a portion of land that he had seen and that he suggested was rich with potential for a school. He wrote,

“I think there is a good place here where Greasy, Middle Fork, Line Fork, Straight Creek, Leatherwood, Cutshin, all head in against the Pine Mountain. Pure air, pure water and plenty of children to enjoy it.”

Having seen Pettit’s work at WCTU (Women’s Christian Temperance Union) Settlement School (later known as Hindman Settlement School), it was clear to Lyttle that she could handle such an endeavor. Pettit not only understood the needs of the area but she also had a reputation for action and a no-nonsense leadership style that had already proved effective in the founding of the Hindman Settlement.

Rev. Lyttle said to her in his letter, “I would shrink from asking anyone but you to undertake to start a school in such conditions as we will have to meet but I know you understand them.” Lyttle had ideas but no land and no aptitude for breaking ground, building out the facilities, or negotiating the finances. However, he knew landowners and community leaders who had these skills — and he knew Katherine Pettit.

As Lyttle’s idea of a new school began to take shape in the mind of the community and when William Creech and other valley families such as the Metcalfs, the Turners, and others called for a school, Lyttle continued to serve as a liaison between the community, the landowners, and with Pettit and Ethel de Long, her co-worker at Hindman.

Katherine Pettit and Ethel de Long did indeed become the co-founders of the Pine Mountain Settlement School and succeeded in founding the institution at Lyttle’s suggested location. It was a school with a well-chosen mission that proved resilient enough to last for over 100 years. While Lyttle was strongly immersed in his Baptist roots, part of the resiliency of Pine Mountain was the ecumenical foundation that Pettit and her successors gave to the institution. The School was never sectarian in nature but was founded as an institution that was Christ-centered, but not under the sway of any one religious denomination.

In the letters of Lewis Lyttle to Katherine Pettit, one can feel the urgent appeals to reform education, civic responsibility, and human empathy in the area surrounding the new school. He asks that Katherine Pettit “invest in the character of these boys and girls.” The letters, recently added to the Pine Mountain Settlement School Collections website, present an early road map to the development of the School.

Pettit and many of her colleagues at Hindman were steeped in the national Settlement Movement that was centered on the work of Jane Adams at Hull House in Chicago. The movement had much in common with the strong egalitarian and independent attitude of mountain people. Both the early settlers of the Southern Appalachians and the founders of the settlement movement shared many of the precepts of the prevailing Protestant religions of the day — Methodists, Presbyterians, Lutherans, Congregationalists, and Baptists. Later years brought many other religious practitioners to the area such as Shakers, Mormons, Catholics, Mennonites, Buddhists, Shinto, and others. However, no religion took hold so dramatically as Baptist.

In the early years of the twentieth century, Lewis Lyttle, as a Baptist itinerate preacher, knew he would never be far from a call to preach in the Central Appalachians. In the 18th century, the Presbyterians held sway in many pockets of the region but the religion did not meld well with the isolation and independent dwellers of the mountains. Nor, did the heritage of dissimulation found mainly in Baptists and their many splinter denominations, fit with the greater population of the Central Appalachians. Early in the settlement of the Central Appalachians, Baptist sects soon dominated many rural communities. An inventory of denominations in 1900 shows Baptists accounting for more than one-third of the total church memberships in the mountains of Kentucky. With the Bible as their supreme guide, many splinter groups reserved their right to their interpretation of the Holy word, and small churches were established in the many small communities often defined by their geography and their kinships, more than their adherence to a specific dogma.

This fragmented geography, population, and religious disparity of the so-called “Southern Mountaineers” led Samuel Tyndale Wilson in 1906 to declare that the “Appalachian Problem” was found in its seven peculiarities: deep-seated Americanism; Protestantism; White; Country [i.e. rural]; Varied and Complex; Delicate; and Urgent.

Writing from a Presbyterian perspective, Wilson and others have been described as leaders in shifting the focus of social/religious uplift from the Black South to the Appalachian mountaineer. The “problem”, as seen by Wilson and many others of his time, was “How are we to bring certain belated and submerged Appalachian blood brethren of ours out into the complete enjoyment of the twentieth-century civilization and Christianity?” The difficulty with this “problem,” was the many varieties of “Christian” and the growing competition for souls. Some “soul winners” held more sway than others in Eastern Kentucky.

Pettit was strongly influenced by the Social Gospel movement and the work of The Reverend Edward O. Guerrant, who was a family friend, a physician as well as a minister. Guerrant, founder of the “Soul Winner Society,” spent many years in the mountains of eastern Kentucky. Along with the Rev. Stuart Robinson, he was instrumental in bringing together many of the ideas of the Settlement Movement into mountain mission work. Both Robinson [Stuart Robinson School, Blackey, KY] and Guerrant [Witherspoon College (Buckhorn School) and others] were dominated by the ideas of Guerrant. While a direct connection cannot be established between Guerrant and Lyttle, it is sure that they were familiars.

While a “Soul Winner” sounds like a competition for souls, the Social Gospel that Guerrant proposed was more one of conciliation and his role one of a conciliator between the various religious factions. Guerrant saw the Soul Winners as inter-denominational — not favoring one religion or sect over another. From his base near Mt. Sterling, Kentucky, and not far from Berea College, Guerrant could easily strikeout to the mountains of Eastern Kentucky.

What is more well-known is the influence of Guerrant upon the Pettits in their Blue Grass household near Lexington where he was frequently a visitor. His many tales of the area had long been shared with his friends the Pettits. It is likely that Guerrant’s ideas stuck with Katherine Pettit as she listened to the banter in her household as she grew up. Following her junkets into the eastern mountains she began to know all too well how fragmented the religious tenets were in the region.  On the need to exercise caution and more than a little conciliatory wisdom, Lyttle, Pettit and Guerrant were all in accord.

Pettit entered the region remarkably well prepared for the task before her. Working with Lyttle and under the shadow of the work begun by Guerrant and other progressive reformers, Pettit was able to take the settlement movement initiative she had learned first-hand at Hindman and meld it with the missionary energy found in the early Appalachian mission schools.  The residential schools that grew under the watchful eye of Guerrant became a lasting model for her.  That model grew into a push for a non-sectarian and strong educational combination — Christian, but not bound to any denomination or sect. Pettit moved forward with a studied Progressive force, a hands-on agricultural knowledge, and a deep commitment to the Settlement Movement. Pettit was more intent on enriching minds, bodies, and character than on sending souls to heaven. She was, as described in the article by Kristy Robinson Horine in Kentucky Monthly (July 16, 2016), a “practical idealist.” Character improvement was an area that both Pettit and Lyttle saw as fundamental for change in the early Central Appalachians.

The letters of Lewis Lyttle and the insight found in the writings of Katherine Pettit reveal an informal, interpretative, and practical view of the early years of the Pine Mountain Settlement School and its relations with the Pine Mountain valley and its people. It is clear in the letters of the two, that the nature of the community fascinated both Lyttle and Pettit. Not just the “kivers” that Pettit so diligently collected, but the language, the agricultural practice, the relationships, show deep love for the land and the people. She spent a lifetime gathering snippets of wisdom which she recorded in her “Common Book,” a scrapbook of common wisdom, quotes, ideas, Biblical interpretations, and medicinal and mental health practices. The “Common Book,” held by the University of Kentucky, with copies at Berea and a poor mimeograph copy at Pine Mountain, is probably the closest record we have of those corners of early Appalachian life as it fascinated one of its most important women. It is also, perhaps, as close as we will get to an understanding of that most important woman.

It is in the letters of Pettit that we come close to understanding her motivations and her hidden personality. It is in the small body of personal comments found in the letters to and from Pettit, with Lewis Lyttle, that help to shape an intimate portrait in time of the history of Pine Mountain Settlement School. Both Lyttle and Pettit worked diligently to contribute to the institution even after retirement. Lyttle continued to preach and became a formidable Harlan County Judge. Until her death in 1938, Pettit kept an ever-watchful eye on the School to which she gave birth and longevity and kept Lyttle, as long as he lived,  at her beck and call.

KATHERINE PETTIT CORRESPONDENCE 1911 August – December
In these letters by PMSS’s co-founder, the seeds of PMSS were planted and planning for a school began.

KATHERINE PETTIT CORRESPONDENCE 1911 My Dear Friend Letter, May 27, 1911
This letter, dated May 27, 1911 and written by Katherine Pettit, recounts a visit by Pettit, Rev. Lyttle, PMSS nurse Harriet Butler and Stephen Guilford (a former Hindman student) through four Eastern Kentucky counties to view a site at Pine Mountain that was proposed by Rev. Lyttle for a new school and for Pettit to visit homes that wove “coverlids” — Pettit’s strong interest.

An earlier trip to Pine Mountain by both Pettit and de Long was recorded by Lewis Lyttle to have taken place in the spring of 1910.  That visit was described by Pettit when the vision she held for so long began to be realized to build an industrial training school in the mountains. Enthusiastic descriptions in Pettit’s earlier letter were used in de Long’s 1911 letter as a way to prompt readers to make donations.

This is a critical document for the Pine Mountain Settlement School as it shows the early passion of Pettit to build a school at Pine Mountain while she was still at Hindman and maps to the later Ethel de Long DEAR FRIEND Letter of 1911 which was a fundraising letter to start the institution at Pine Mountain.