Born in December 1929, Mary Jane Bishop Hobgood spent her early adolescence at Pine Mountain where her widowed mother, Birdena Bishop, had taken a job in 1940 which over the years included teacher, dietician, community coordinator, and housemother. Birdena had come from Berea College where she had worked as an assistant cashier following her graduation from the college. Birdena, Jane, and Jane’s younger brother, James, moved into Far House where the children mingled with the students housed in the small dormitory and had the advantages of the boarding school students.

Following her graduation from Pine Mountain Settlement School, Jane became a perpetual and active alumna of the Pine Mountain Settlement School (PMSS) for almost three decades. Her dedication to the School began when she and her younger brother were boarding school students and continued as she grew her career, married, had three children and became an active force in guiding the School as an Advisory Board member.

During her high school years at Pine Mountain, Jane Bishop was involved in theater productions and English Country Dancing, interests that were to continue throughout her life. She, along with her brother, played parts in the School’s productions of H.M.S. Pinafore in 1940 and The Moonstone in 1944. In a resume she prepared for the PMSS Board of Trustees years later, she described her “lively” interest in folk arts which started at the Pine Mountain Settlement School and became a life-long passion.

After both Jane and James graduated in 1944, they attended Berea (KY) College, their mother’s alma mater. There, Jane earned a Bachelor of Arts degree in Recreational Sociology, concentrating in Folk Arts, Dance, Music, Drama.

Jane then worked for two years, 1948-1950, as Director of Folk Arts and Recreation at the Hindman (Kentucky) Settlement School. It was a job that only deepened her appreciation and knowledge of Appalachian culture.

Furthering her education at the University of North Carolina, Chapel Hill, Jane received her Master’s Degree in Curriculum on Folklore with a focus on Folk Sociology and Cultural Anthology in 1952. This was followed by a two-year position with Berea College as Itinerant Director of Recreation and Regional Arts with the Council of Southern Mountains.

When Jane Bishop married Burnet Mclean Hobgood in 1957, she continued to teach dance and music and to direct a children’s theater workshop in Ithaca, New York, on a part-time basis. After a move to Dallas, Texas, where Burnet became chairman of the theater program at Southern Methodist University School of Music, Jane continued her work in the field of education.

From the mid-1970s, Jane was actively involved with Pine Mountain School and its administration through her leadership in the PMSS Association of Alumni and Friends. She served as president, then vice-president, of the Alumni Association, and chaired various committees, as well as serving on the PMSS Advisory Board. For many years, she enjoyed attending the annual Pine Mountain Homecoming, as expressed in a February 21, 1976, letter to John Deaton, also an effective member of PMSS Alumni Association and former PMSS student in the 1940s:

Just seeing that many people from our own class, living breathing, coping, and back there for one day was a revelation…. Very fundamental something-or-other there about “See? We all grew up and are reasonably good examples of what you, Pine Mountain, hoped we’d be.”

Jane’s contributions to the School were numerous and her dedication to the institution, fierce. She was particularly concerned about the future not only of the Alumni Association but the School itself. In her lengthy letters to John Deaton, she regretted the passivity of the then director and Board of Trustees, writing that

We believe that planning for Pine Mountain’s future must rest with an administration attuned to the present and future — sensitive to history, but not hampered by it; leadership which is fully supported by an active Board.

Hobgood felt that an institution should preserve its culture at the same time it takes steps to move forward and stay vibrant. She describes a visit that she and her husband “Hob” made to two isolated arts centers in rural England and one in Tennessee. They were impressed with how each center preserved “a culture and its customs, its arts, its values — its parts that are worth saving.” But, she felt, preservation of such things depends upon the institution “having a continuative life!”

Hobgood also emphasized that the School’s programs should relate to the needs of the surrounding community. After attending a joint meeting of the Advisory Council and Board of Trustees In July 1985, she summarized its findings to Deaton as “(a) the need for increased financial support for programs and facilities and (b) the need for significant educational programming and activities for the immediate community and region.” Her opinion of the newly installed environmental program, although she supported it, was that “it has developed and operated as a separate entity and not as an integral part of the region in which it is located…It must have value and meaning in the place where it exists.”

Hobgood’s judgments of the School’s operations were manifestations of her devotion to Pine Mountain Settlement School and her belief in the School’s potential. After the 1990 Homecoming, Hobgood portrayed her time with Pine Mountain School friends to John and Faye Deaton in a letter dated August 19, 1990:

It was a splendid time with all, the strange mixture of sorrow and simple joys, the almost intense poignancy of our times together, the on-goingness and certainty in our deep and abiding love of each other and that incredible place.

In her later years, Jane contributed her life story to the PMSS archives through her audio recording of her singing Pine Mountain songs and through an oral history that chronicles the boarding school years.

By 1975 the Hobgood family included three children — Laurence Bishop Hobgood 16, Cathleen S. Hobgood (“Cali”) 13, and Brent Mclean Hobgood 10, The family had moved to Urbana, Illinois, where Jane’s husband “Hob,” by then a well-known theater director, writer, and scholar, became head of the Department of Theater at the University of Illinois, Urbana.

Cathleen later married and, as Cali Hobgood-Lemme, is a recognized artist/photographer and proprietor of an art photography business.

Laurence is an accomplished jazz musician, pianist and musical director for Kurt Elling. He has earned numerous awards including a 2009 Grammy Award for his album Dedicated to You with Kurt Elling and has been nominated for three other Grammys two in 2001 and one in 2009. His 2013 album release “Christmas” was chosen by The New York Times and The Chicago Tribune as one of the top holiday CDs of the year. He has performed at leading venues throughout the world including the Kennedy Center, Carnegie Hall, Lincoln Center, Ozawa Hall at Tanglewood, the Chicago Symphony Center and Ravinia, Sydney Opera House, London’s Barbican and Queen Elizabeth Halls, as well as the world’s most prestigious jazz festivals including Montreaux, North Sea, Monterey, Spoleto USA, Newport, Umbria, Montreal, and JVC festivals in Paris and Japan.

Brent received a Master’s Degree in Public Administration and Public Affairs from Southern Illinois University, Carbondale, in 1990 and has worked as a city administrator. 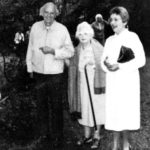 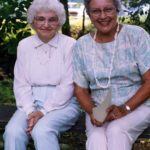 Burnet Mclean Hobgood, husband of Jane Bishop Hobgood, was the son of missionaries in Africa where he was born, When he was eight the family moved to Kentucky. He studied at Transylvania College in Lexington, KY, and then joined the Army in WWII. He married Jane Bishop in 1957 while he was an instructor at Catawba College in North Carolina. Jane and close friends affectionately called him “Hob.”

He died of a stroke at age 78 on December 11, 2015, in Urbana, IL. He had for many years led the theater department at the University of Illinois at Urbana-Champaign. He left an impressive legacy as the instructor of such theater and film luminaries as actress Kathy Bates, known for her roles in the movies “Primary Colors,” “Titanic” and “Misery,” and Ang Lee, director of “Sense and Sensibility” and “The Ice Storm.”

Jane currently struggles with the devastating disease of Alzheimer’s. Last communications indicated she was still living in Urbana.