[Note: Letters from PMSS staff in the PMSS Collections are carbon copies, typewritten, unsigned, and meant for the Office files. The original signed copies were sent to the correspondents. The initials at the bottom left of most PMSS letters indicate the writer (along with initials of the secretary). For example, “EZ” refers to Ethel de Long Zande, “KP” to Katherine Pettit, and “EKW” to Evelyn K. Wells. Mary Rockwell Hook‘s letter is handwritten and original. The following list of contents is in chronological order and not necessarily in the order of the image numbers.]

[003] July 9, 1925. To “My dear Mrs. Hook” from KP (Pettit), inviting her to visit; describes a meeting of the Junior Agricultural Clubs at the University of Kentucky in Lexington, which several PMSS girls attended and won a prize for a mountain-style weaving demonstration; Uncle William (Creech)’s granddaughter talked about her grandmother’s coverlets and blankets. Pettit then tells about the Fourth of July family gatherings at PMSS: “The mothers led their nags with four or five children on them all wearing Fourth of July caps…. There were some many babies and such a difference in their general health and daintiness since our first Fourth of July celebration twelve years ago! Our nurses and doctors have certainly been good angels for the babies in this district.”

[002] July 23, 1925. To “Mary dear” from EZ (Zande), responding to Hook’s letter in which Hook expresses a longing to visit PMSS; insists that Hook “come soon” to see the new church (Chapel) and the Girls’ Industrial Building. Zande comments on the house Hook is planning to build for “Emily”; encloses a copy of her letter to Mrs. Martin.

[004], [004a] November 27, 1925. Two-page letter to “Mary” from EZ (Zande), [004] asking her to “send designs for the front of the schoolhouse (School House). We hope to remodel it with the boys before school is out, this year. The platform is already made, big enough to accommodate a great many children. The walk goes right straight in to the front. …”; will send photos. Mentions their children, Dick (Hook), Berto (Zande) and Elena (Zande). Describes Thanksgiving, including the basketball team’s game against Wooten: “Fancy eight boys riding in on horseback, from thirty miles away, for a Thanksgiving game!” with dinner and country dancing afterwards. [004a] Reports that “Marguerite Butler and Mrs. Campbell are actually starting the John C. Campbell Folk School at Brasstown, North Carolina….” Mentions Luigi’s (Luigi Zande) desire to see his mother but they can’t afford the trip.

[005] March 19, 1926. To “Mary” from EZ (Zande). PMSS is raising money, about $250, to help restore Uncle William and Aunt Sal Creech’s old log house (Aunt Sal’s Cabin); describes arrangements with the Creech children and plans to furnish it and create a garden of Aunt Sal’s flowers. “Bill Creech has been saving a poplar tree for years for the shingles. The ‘boys’ (Bill, Henry, and Columbus) are going to much of the work of moving and setting up the house.”

[008] through [008c]. March 19, (no year). Four-page letter to “Ethel” (Zande) from Hook, who asks for directions if she “should take a sudden notion to drop down to Pine Mt….” Tells of her tentative plans to visit; would like to stay at Open House; heard from KP as she travels toward Japan.

[006] March 23, 1926. To “Mary” from EZ (Zande), who responds to Hook’s “notion” to visit, sends directions to PMSS, and tells her what she may see at PMSS: the “dancing ladies” from Boston or special services by Mr. Zeigler, the preacher from Berea. Suggests Hook design a stained glass window for the PMSS church (Chapel).

[009] April 6, 1926. To “Mary” from EZ (Zande). “I am so glad you liked the directions for reaching Pine Mountain. They were modelled on your original draft.” Acknowledges Hook’s $25 check for William and Sal Creech’s log house.

[011] September 29, 1926. To “Mary” from EZ (Zande). “It’s great news that you are doing a country house for Marion Gates….” Tells of her efforts to get a Ford truck for the School to haul coal, etc., including asking Mr. (Henry) Ford. It would be housed in Luigi’s workshop. Zande will send a picture of the Memorial Fountain for Uncle William. The School House front has been altered, even though no plans were received from Hook. “…[T]he little balcony from the library gives quite a choice view.”

[012] October 4, 1926. To “Mary” from [unsigned]. Tells of a visit by the Mungers, donors of the Chapel, who are “pleased with it but agree with many of us that the chancel window is a bit bare and crude….” and needs a stained glass or amber glass window. Meanwhile, blue curtains are planned for the window, “the color of the long curtains the weaving department is making to hang at both sides of the chancel arch….” Hook is asked for a recommendation for an upholsterer or decorator. Includes a sketch of the curtains and asks Hook for her ideas. 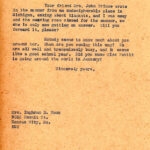 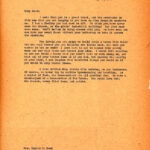 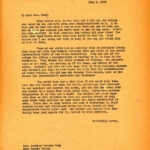 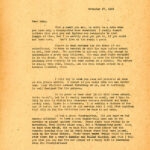 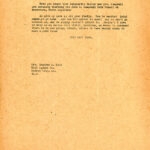 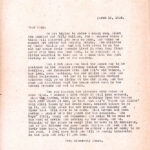 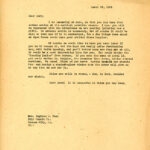 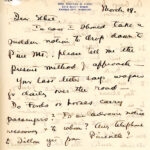 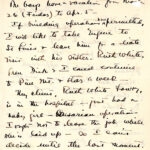 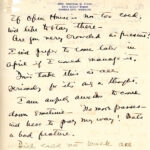 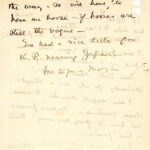 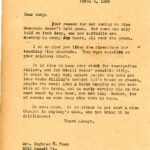 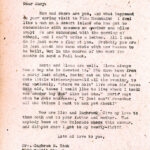 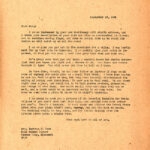 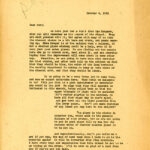