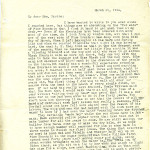 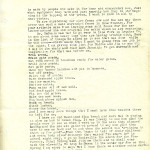 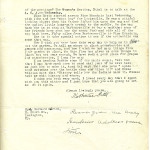 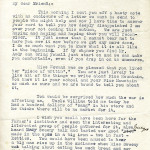 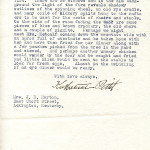 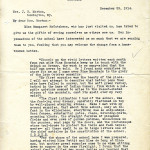 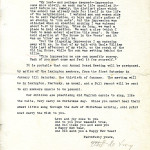 Pettit crosses Pine Mountain in a snow-storm with Mrs. Black and one chicken. She refers to herself as a “fat old woman” but takes pride in her stamina and compares it to 67-year-old Aunt Sal. She walked the land to test its drainage and finds it the best in 40 years due to work of “Col. Goethals” [referring to Col. Goethals who supervised the construction of the Panama Canal. Unclear who did the work at PMSS.] Reports on cutting fine poplar and securing help from Berea in constructing a drying kiln. Describes the “Sugar Forest” of Uncle William where the Creeches are making maple syrup and sugar — Aunt Sal smoking her pipe. Describes the PMSS maple sugar operation from trees near the Saw Mill but asks Mrs. Morton to send information on the process. Provides additions to Farmer McSwain‘s “laundry list” of tasks that workers must accomplish. Notes that Aunt Sal is coming to show her how to “break flax” with a flax break. Plans trip to conference in Louisville where she plans to stay in Neighborhood House. No trip in the Berea motor car in the spring. Notes that Ethel de Long will speak to A.C.A. on Wednesday of that week. Nurse Clara Davis buys a “nag” in Barbourville and rides 50 miles from Barbourville to PMSS. Pettit asks her to determine if an automobile can travel the route. Says she is sending maple sugar to “Buddie.” Aunt Sal describes the boiling down of the sugar from maple sap.

Pettit is disappointed that Mrs. Morton is not coming in Autumn. Notes that Eve Newman [Secretary] liked Morton’s comments on her writing for PMSS. Reports that WWI is disrupting the sale of ‘sang’ [ginseng]. Uncle William reported that he has over $100 in sang in his store and no market. Reports on the Farmer’s Institute at PMSS and Mary Sweeny‘s talk [on nutrition?] and stew [“Kentucky burgoo”] made in the open in iron kettles. Reports on trip made by Aunt Sal and Secretary Newman to Flurrie Metcalf‘s “across the ridge” where they describe the home and its contents mostly hand-made. Also describes the impromptu dinner made from locally grown resources: chestnuts, chicken peaches, fresh eggs.

Flurrie/Flery Metcalf lived on Right-Hand Fork of Little Laurel — ‘across the ridge’ from Aunt Sal and Uncle William’s home on Isaac’s  — and now from Jimmy Wilder’s. Flery was daughter of Daniel Boone Creech, who was son of Thomas Creech, who probably was William’s Uncle and from whom he bought part of his first tract on Isaac’s.

PMSS bought the Right-Hand Fork of Little Laurel place in 1918 (same summer as acquiring the site for Big Laurel Medical Settlement),and still owned it in 1970. There was some discussion several years ago (Nancy Adams  [PMSS Director, 2002-2013] or later), but I don’t know the final disposition.

Letter from Ethel de Long to Pettit and staff about visit and description of School by visitor Margaret McCutcheon [former staff at PMSS], who describes campus and is example of how others see PMSS. McCutcheon’s reflection follows:

Closely as the vivid letters written each month from yon side Pine Mountain keep us in touch with the doings on Greasy the work is so many-sided that the half can never be told. So I found many surprises in store for me as I came over Pine Mountain in the glory of the late October sunshine.

My first surprise was the beauty of the place. I will not attempt to describe what better pens than mine have failed to convey, but the soft green valley, bathed in the haze of Indian Summer, from which a palpable quietude seemed to arise to the russet-shaded slopes of the mountain, cast its spell over my very spirit.

The first intimation I had of the school, was the foot-log over Greasy, carefully flattened on top by well-placed stepping stones. Here I met with my second surprise, that about this school, only infant in the wilderness, everything was so ship-shape. Good fences, substantial gates, roads, hitching-posts, mounting blocks, the straight furrows of ploughed fields and even rows of garden patches, wood-boxes on the porches, coat pegs by the doors, and the picturesque stone tool-house to protect the tools and farm implements — all these spell to me in large letters one of the chief articles in the constitution of the school, O R D E R.

For the charm of the school home I was prepared, having visited Miss Pettit and Miss de Long at Hindman, but another great surprise came to me, when sitting down to supper in the cozy firelight, I found that the school family filled two round tables and learned that there was another household besides. All-morning school with three teachers and twenty-five pupils was beyond my wildest dreams of what even Miss Pettit and Miss de Long could achieve in a year and a half.

My last and perhaps deepest impression came more slowly, as each day’s life unrolled itself before me, namely, the distinct place which the school has already made for itself in the life of the neighborhood. I watched men and women ride in to sell vegetables, or boys and girls gather of an evening to ‘run sets’, but the impression was clinched when on election morning I was awakened about 5:45 by hearing, ‘Miss de Long, we want a place to hold election. We want a nice (which I took to mean sober) election this year.’ So they held election at ‘The House in the Woods‘ and it was as ‘nice’ as could be.

But the lingering impression I am carrying away with me is that of my talk with Uncle William this last afternoon of my visit, on the porch of the Old Log House, while the sun was setting behind the hills.

This impression no one can possibly convey. Each of you must come and feel it for yourself.

Miss de Long tells Mrs. Morton that the annual Board meeting has been postponed by action of the Lexington members until 30th of January to be held in Lexington. Describes the practicing of old English carols by children.