PMSS was an important educational opportunity for young people in the surrounding rural community but only if their families knew that the School existed. It was the job of several staff members, such as teachers Alice Cobb, Arthur Dodd and Gladys Hill, as well as PMSS Director Burton Rogers, to traverse the mountainous area, meeting with prospective students and parents to inform them of the advantages PMSS had to offer.

Among the families that Arthur Dodd, PMSS principal, visited was the Reynolds family from Kodak, Kentucky, but at the time the parents and children were living with William Brashear and his wife Mary Jane (Wood) Brashear. The elderly couple was being cared for by their daughter, Gertrude Brashear Reynolds, who was Harold’s mother. The recruitment effort was an obvious success since four of the Reynolds children were sent to Pine Mountain Settlement School over time. Harold Reynolds was the first to attend (from 1941 to 1944), followed by Douglas Wade Reynolds (1943-1947), Bonnie Faye Reynolds (1945-1949) and Jimmy Rex Reynolds (1947-1949). All four later graduated from college, many from Berea College.

Word of the School did get around. Another boarding school student, Allen Long, also came from Kodak. He heard of the School from his Kodak Elementary School friend and Harold’s brother, Jimmy Rex Reynolds. Allen later served as president of the PMSS Board of Trustees from c. 2007 until 2014.

Archived documents indicate that Harold Reynolds’ years at Pine Mountain, 1941-1944, allowed him to express his creative side. During his first year, he was one of the players in the School’s traditional Nativity Play. In May 1944, he played Sergeant Cuff in The Moonstone, a mystery play presented by PMSS’s senior class.

In that same year, he was listed in The Pine Cone, a Pine Mountain student publication, as one of two assistant editors. [His sister, Bonnie, was editor of The Pine Cone of October 1948 through March-April 1949.] He also submitted an article titled “The Crash” to the January 1944 issue of The Pine Cone, telling the story of a stunt pilot who, while performing for the war bond drive, crashed at take-off.

He continued his artistic pursuits throughout his life, enjoying singing, folk dancing and playing guitar and banjo. According to his obituary,

As longtime members of the United Methodist Church, Dauphin Way UMC was an important part of Harold and [his wife] Martha’s lives. Harold was an enthusiastic Sunday school teacher and baritone in the choir. The couple participated in overseas choir outreach including tours into communist nations.

Graduating in 1944, Harold was part of a class that had attended school during the United States’ participation in World War II. He was among the 150 students from the School (graduates and current) in military service in 1944, having served honorably as a Corporal in the Army Corps of Engineers.

As a young boy, Harold wanted to study “plastics” when he grew up, according to his brother’s autobiography written in c. 1943 (transcribed below). His interest in synthetic material led him to earn a Master of Science degree in chemistry and a position with a company that produced artificial fibers. His obituary provides the following details:

Harold received his BS from Berea College in 1948, and an MS in Chemistry from East Tennessee State University in 1958. Harold was employed by Beaunit Fibers from1954-1978, serving as Rayon Plant Manager 1973-78 in Elizabethton, TN. From 1978-1995 he was Director of Human Resources at Courtaulds in Mobile, AL. He was a 50-year member of the American Chemical Society.

As part of the Pine Mountain’s application requirements, prospective students were required to write and submit their autobiography. Harold’s brother, Douglas, wrote this poignant story about his family in approximately 1943 [slightly edited]:

My father, he’s a miner. Well, he and mother used to run the post office but then Grand-dad [William Brashear] told dad he could have the farm if we lived on it til Grand-dad died. So about four years ago we moved to the farm. The land there is not like it is over here. This land is new — it’s just been started but our land is worked out. We do have virgin timber though — mostly oak for all the popular’s [sic] been taken out. All the mineral rights to the land have been sold. A man up in Lexington owns most of the coal around us.

Dad’s worked in the mines a long time. He’s always dug coal, never loaded it, and he’s worked deeper and deeper into the mines. He got so he made twenty-five dollars a night — that’s why he got bronchitis. He stopped for a while, got better so he went back again. Mother tries to tell him but I guess he is foolish —well, not foolish, but … he figgers he’d like to make money while he can.

He’s promised to send us all through college except that Harold and I have to help pay for Bonnie Faye and Jimmy. Harold’s doing real well, has only one C, … is interested in plastics. Me — well, I’m interested in electronics and if I keep on being able to do math I’ll be all right. Bonnie, I think she’d like to be a doctor.

Dad figures on selling our timber now that prices are high. Why even scrappy stuff sells at one hundred dollars per 1000 feet. And we’ve got some really good timber. We’re going to build a home too. The farm house is too big, twelve rooms and the walls are about three feet thick — not even water inside. Mother likes to plan houses — she’s thinking about this one.

Dad wants to give us the chance he missed …

For an image of the original document, go to EDUCATION Children’s Writing II (58) Douglas Reynolds
[children_wrtg_058.jpg]

Harold married Martha Shurtleff Reynolds and they had four children. During their 63 years of marriage, Harold and Martha enjoyed many activities together, often participating in music and civic events. They led traditional folk dance at Mobile Infirmary’s Cardiac Rehab Operation, Bounce Back, where Harold received the “Most Spirit Award” In 2010. They had lived in Mobile, Alabama, since 1978.

Harold Reynolds died on September 13, 2012, at age 84 in Mobile, Alabama. He is remembered by a friend as “the epitome of a loving husband, father, grandfather and beloved member of our community.” 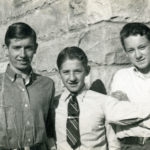 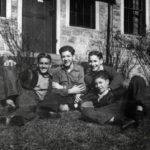 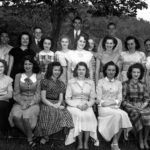 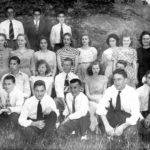 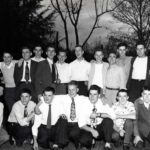 Return to BIOGRAPHY – A-Z
See also ELIZABETH HENDERSON MD Biography – Includes transcription of a story featuring Dr. Henderson in The Pine Cone of November 1948 written by Bonnie Reynolds titled “A Bit of a Doctor’s Day.” She describes her experiences and observations when assigned to act as an assistant to “Dr. Elizabeth.”