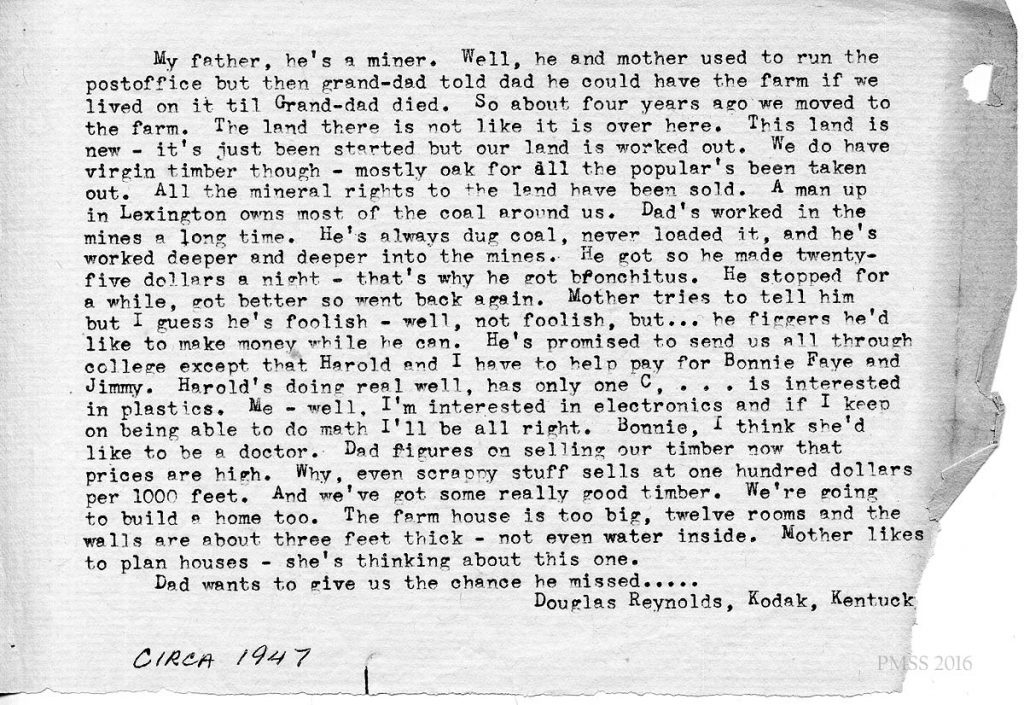 My father, he’s a miner. Well, he and mother used to run the post office but then Grand-dad [William Brashear] told dad he could have the farm if we lived on it til Grand-dad did. So about four years ago we moved to the farm. The land there is not like it is over here. This land is new — it’s just been started but our land is worked out. We do have virgin timber though — mostly oak for all the popular’s [sic] been taken out . All the mineral rights to the land have been sold. A man up in Lexington owns most of the coal around us. Dad’s worked in the mines a long time. He’s always dug coal, never loaded it, and he’s worked deeper and deeper into the mines. He got so he made twenty-five dollars a night — that’s why he got bronchitis. He stopped for a while, got better so he went back again. Mother tries to tell him but I guess he is foolish —well, not foolish, but … he figgers he’d like to make money while he can. He’s promised to send us all through college except that Harold and I have to help pay for Bonnie Faye and Jimmy. Harold’s doing real well, has only one C, … is interested in plastics. Me — well, I’m interested in electronics and if I keep on being able to do math I’ll be all right. Bonnie, I think she’d like to be a doctor. Dad figures on selling our timber now that prices are high. Why even scrappy stuff sells at one hundred dollars per 1000 feet. And we’ve got some really good timber. We’re going to build a home too. The farm house is too big, twelve rooms and the walls are about three feet thick — not even water inside. Mother likes to plan houses — she’s thinking about this one.

Dad wants to give us the chance he missed …