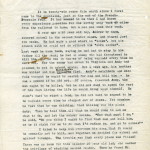 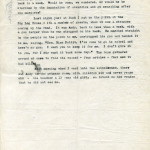 KATHERINE PETTIT’S STORY OF “ANDY AND HIS GUN”

It is twenty-six years this month since I first came to the mountains, just at the end of the French-Eversole feud. It had seemed to me that I had known every experience possible for one living away back 45 miles from the railroad to have, but a new one came this week.

A year ago a 20-year-old boy, Andrew by name, entered school in the second reader class, and stayed just two weeks. He had made a good start in “books”, but his cousin said he could not do without his “corn licker.”

Last week he came back, saying he had had to stay by his father all the year; he had an enemy who had threatened to kill him, and he was in danger of being waylaid every time he went out. Now the enemy had moved to Virginia and Andy had planned to get in school again. But a week ago his brother was killed and his [……] fled. Andy’s neighbors and kinfolk thought he ought to search for him and kill him — he was a coward if he did not. Of course, reasoned Andy, the man ought to be killed, but he did not want to spend the rest of his days living the life he would bring upon himself. He didn’t want to start a feud, he did not want to expect to be waylaid every time he stepped out of doors. Yet somehow he felt that he was shirking, that killing was his plain duty. Then he told them all that he would come to ask me what to do, and let the school decide. “Now what must I do,” he said, “Do you think I ought to find that man and kill him, or is it right for me to do what I’d rather do, and go to school?”

I tried to help him overcome his idea that it would be cowardly to kill, and together we decided for school and against revenge. The trouble was that every place was filled!

There was no room for this slender 20-year-old lad, who wanted the privilege of studying second reader. Then he found Mr. Browning [farm manager], one of our workers, and told his story. Mr. Browning offered him a place in his room and it was planned that he…

… should go home and tell his people his decision and come back in a week. Would he come, we wondered, or would he be overcome by the imputation of cowardice and go searching after the murderer?

Last night just at dusk I sat on the porch at the Big Log House with a number of guests, when we saw a stranger coming up the road. It was Andy, back in less than a week, with a gun larger than he was strapped on his back. He marched straight by the people on the porch to me, unstrapped his gun and handed it to me, saying, “Now, Miss Pettit, I’ve come to go to school and here’s my gun. I want you to keep it for me. I don’t give it to you, for I may want it back some day.” The boys gathered around at once to find its record — four notches — four men it had killed.

Next morning when I went into the school house, there sat Andy in the primary room, with children six and seven years old — his teacher a 13-year-old girl, so intent on his reader that he did not see me.

** The gun remains in the collections of Pine Mountain Settlement School.