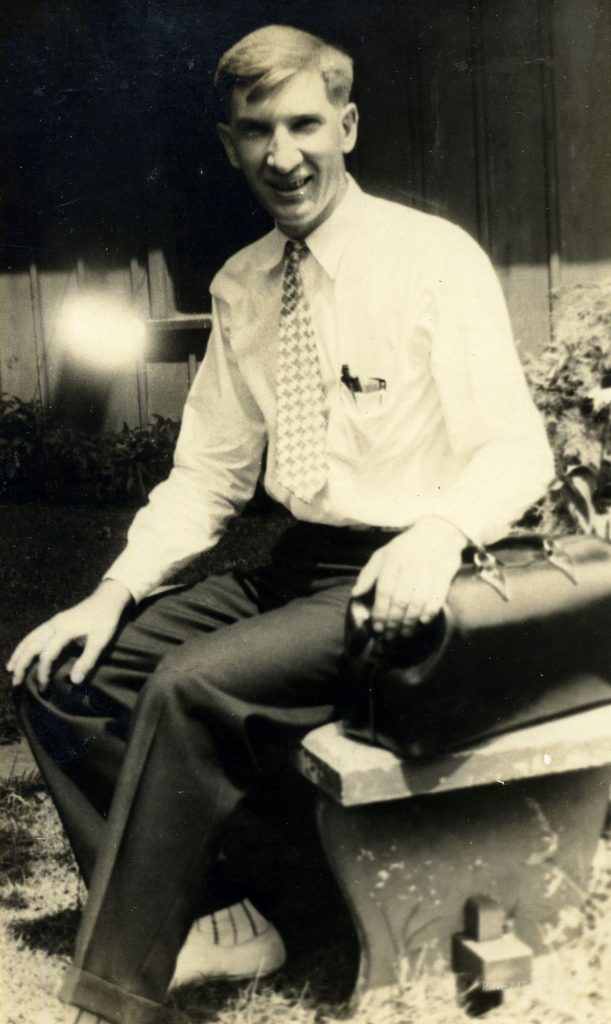 It took some effort for Director Glyn Morris to lure Dr. Howard H. Ingling to Pine Mountain Settlement School. But when Morris read Dr. Ingling’s application for employment, he knew he had an excellent candidate.

The year 1938 was just beginning and Morris was looking for a temporary replacement for Dr. Wilmer S. Lehman, who had served Pine Mountain Settlement School and community for one year. The doctor had signaled that he was contemplating a departure sometime in the near future. One of the resources Morris used was a list of doctors sent to him by the Student Volunteer Movement (SVM). The SVM was a group in New York that recruited college and university students in the United States for missionary service abroad but also sought to publicize and encourage the missionary enterprise in general. Consequently, they maintained and shared a list of doctors who submitted their names for placement in institutions in need of medical services. These medical volunteers were generally appointed as temporary staff to fill in for departing medical staff or in environments that could provide maximum training for the new doctors.

Dr. Ingling was one of those volunteers. He received a letter of inquiry from Glyn Morris, who wrote on January 11, 1938:

We should like to secure a doctor who will use this School as his headquarters and serve a very isolated and poor rural community. …We have a small infirmary of seven beds with a trained nurse in charge. There is a small room which can be used for an operating room.

The School is located about sixteen miles north of Harlan in Harlan County. To the north and west of this School is a large area served by no doctor and entirely dependent upon whatever medical service we can provide. At the present time we are developing a “Nurse Aide” program — as you will see by some of the enclosed literature. There is a great need for a doctor in this area — and the people are as cooperative as can be expected considering their circumstances. In the past we have had a health association to which nearly everyone in our scattered community belonged. The folks pay their dues by work or produce but the doctor’s salary of $150 per month is paid by the School. He also receives maintenance which includes housing, board and laundry, as well as heat and light. If married, we have a house in which he may live. He also receives one month vacation with salary.

Much of the traveling can be done by car but occasionally it is necessary to ride horseback.

I should like to add that the School is twenty-four years old and is one of the best of its kind in mountain work. It is in a lovely setting and is carrying on a progressive educational program.

Intrigued by the description of the School in Morris’s letter and accompanying literature, Dr. Ingling, his wife Thelma, and friends visited the Pine Mountain campus for one week in June 1938. Glyn Morris was absent from the campus at the time, but the couple began a friendship with Arthur W. Dodd, a PMSS teacher. At first, they were simply exploring possibilities but were so impressed that after their visit they sent a donation and asked for additional information concerning the physician’s work at the School.

In August 1938, Ingling submitted his application form, in which he provided all the necessary information. Howard H. Ingling was born on November 21, 1908, in Enon, Ohio, and was currently living in Springfield, Ohio. His educational preparation included an A.B. degree from Ohio Wesleyan University in Delaware, Ohio, in 1931 and his M.D. from Western Reserve University Medical School in Cleveland, Ohio, in 1935. His medical internship in 1936 was at the Springfield City Hospital. His experience since then was two years and two months of general practice. As to the question of his familiarity with country living, he wrote that he was “born and raised on a farm in Clark Co., Ohio, where I worked and lived until I went away to college. During my college and university life in the summers I worked on the farm.”

In a subsequent letter, Ingling inquired if Morris would consider an employee rather than a volunteer. Morris responded that he might consider temporarily replacing departing physician Dr. Lehman with a paid position. Morris also assured Dr. Ingling that “Some of our older girls work in the community under the supervision of the nurse and are very helpful to both the nurse and the doctor.”

Morris and Ingling met in September to discuss the position. Nonetheless, in spite of Ingling’s enthusiasm for the School’s work, he finally made the decision to decline Morris’s offer, writing “I never realized that it would be so hard to pull away from Springfield once one becomes rooted here.”

One of Dr. Ingling’s references described him in a manner that perhaps foreshadowed Ingling’s eventual decision to turn down the PMSS position.

I learn that [Dr. Ingling] has a large practice in Springfield, and in leaving it he will make a very distinct personal sacrifice. I imagine his motive in applying for your position is to fulfill his early sense of a divine vocation as a medical missionary.

Five months later, Dr. Ingling’s life took a turn. On January 16, 1939, His wife gave birth to a daughter, Patricia (“Patty”) Irene. In his letter to Morris announcing the birth, he wrote, “If there is a chance of my coming to Pine Mountain permanently I wish you would again consider me.” Morris kept him in mind, and by April, with Dr. Lehman’s departure imminent and the scope of PMSS’s work into the community widening, he offered the position to Ingling once again. This time Ingling accepted.

When he arrived at Pine Mountain around July 1, 1939, with his wife and child, Dr. Ingling was eager and ready to dedicate himself to the School and the community. But it didn’t take long for the doctor and his wife to realize how challenging life and work at Pine Mountain would be. On December 10, 1939, he wrote in a resignation letter to Glyn Morris that “I desire to leave the community now because my family finds it so much different from the city in central Ohio where we have been accustomed to living & working.”

How long he stayed at the School beyond the date of his letter of resignation is not recorded in the Archives, except for the entry indicating his length of service, “July 1939 – June 1940,” in the GUIDE TO PMSS WORKERS 1913-2000s. If this is correct he continued his work at Pine Mountain for an additional six months.

Dr. and Mrs. Ingling continued to visit Pine Mountain in the years following his departure from the School. In November 1945, Miss Grace Rood, PMSS nurse, asked in a letter if he would be interested in a superintendent position at a new Creech memorial hospital that the School was planning. She assured him that recent improvements on campus “make housekeeping easier than it was before.” A letter from H.R. S. Benjamin, PMSS Director who succeeded Glyn Morris, followed, reiterating the offer.

Dr. Ingling declined this opportunity. But later in 1957, there was another series of back-and- forth correspondence about his working at PMSS. By this time, the School’s financial difficulties were a consideration, when then-Director Burton Rogers wrote to Ingling,

Our medical program is to be reviewed very carefully in the coming weeks to determine whether we can retain our present hospital set-up or not. It is a heavy financial burden and conditions are changing in this area….Meanwhile, we may be needing a doctor sometime this autumn, as Dr. [George] Tootell…is not sure of staying beyond September.

A month later, Dr. Ingling was again offered and again declined a temporarily position to replace Dr. Tootell at Pine Mountain, while the latter was working in a mission in New Mexico.

Although his personal circumstances compelled him to turn down this and later offers to return, Dr. Howard Ingling could not forget life with the friends he made in the idyllic countryside of Pine Mountain, nor the satisfaction of making a difference in the School and the surrounding community. Despite the challenges he faced, the sense of pride, satisfaction, and accomplishment he felt were worthwhile reasons to have served the School.

Glyn Morris’s Report to the PMSS Board for the period of April 1 through October 1, 1939, provided health clinic statistics followed by this statement about Dr. Ingling’s work:

A comparison of these figures with those of a year ago shows considerable increase in the service rendered Pine Mountain through its doctor. Dr. W. S. Lehman, who came to Pine Mountain for one year has been succeeded by Dr. Howard H. Ingling of Springfield, Ohio. Dr. Ingling seems well fitted for his present position. He conducts regular weekly clinics at Line Fork, Lower Greasy, Incline, Turkey Fork and Big Laurel and in the brief period since his arrival he has built the Health Association to a paid membership of 210. The highest number ever reached was 55 in 1935. His work is a thrilling story in itself.

After the United States entered World War II, Dr. Ingling joined the Army as a Captain in the U.S. Army Medical Corps stationed in France and met the ultimate battle for his life and for those he was charged to medically save.

From August 14 to September 10, 1944, Capt. Ingling’s unit was in action against the German forces in France. The doctor’s letters to his wife during that time are now in a collection held by his daughter, Patricia Ingling Everhart and her husband. In one of his letters, Capt. Ingling describes a battle in August 1944 for the French town of Dornot, in which he and his injured comrades endured ferocious artillery attacks by the Germans. An article published by the Springfield News-Sun on June 28, 2002, “Doctor’s letter tells of battle for French town against Nazis,” provides excerpts from that letter.

A biography of Capt. Howard Harrison Ingling (Honoree record #314164) on the Military Hall of Honor website provides details of his wartime experience and leadership, including the following:

During that period, CPT Ingling fashioned a portable X-ray machine and was recognized for his courageous actions and extraordinary heroism in getting wounded men from the battlefield. Those actions earned him the U.S. Army’s second highest award for valor, the Distinguished Service Cross.

Howard Harrison Ingling was born on November 21, 1908, in Enon, Clark Co., Ohio. His parents were Guy A. Ingling and Jennie (Allen) Ingling.

Howard Ingling, while studying medicine as an intern, married Thelma McBeth, clerk (born July 12, 1911), on June 8, 1935, in Clark County. Their first child was Patricia (“Patty”) Irene Ingling, born January 16, 1939, in Springfield. Patricia was a student practical nurse when she married Bruce Carl Everhart (b. 1937) at age 18. Their second child, Frances Carol, died on February 9, 1947, one day after birth.