William Napier and Bonnie McIntosh met while attending PMSS as students in the late 1920s and married soon after leaving the School. They represented a number of students and workers who met at the School and went on to build their lives together and raise families using the skills, ethics, and customs that they learned at the School as their foundation.

The children or grandchildren of those PMSS students and workers often grew up hearing fond stories about the School, such as the beauty of a lush campus nestled against a mountain ridge, the solemnity and grace of the Nativity Play, folk dancing on the Green, hands-on learning experiences as they worked to pay for part of their tuition, or living in one of the aesthetically designed wood and stone houses, each with its own descriptive name.

Graduates and their descendants alike often visit the School at some time in their lives and find to their delight that this beloved School remains intact and continues to function effectively many decades later. The School’s mission may have been altered in keeping with the current needs of the community, but the basic spirit of the School lives on.

Liz Napier Griffel, one of Bonnie and William’s four children, visited the School in 2015 to see for the first time the place she had heard so much about from her parents. She describes her visit to the places her family lived and worked, including Pine Mountain, as

…life changing. [I] gained so much more respect for my parents and grandparents, and I already felt so much gratitude for the strength and the desire they had to seek an education for themselves. I found Pine Mountain to be a beautiful and peaceful place that had seemed to change very little since my parents attended. [It was] wonderful to imagine them back there at that time.

According to Ms Griffel, they had attended the School in 1928 or 1929, a year or two before it became a boarding school, but it is not known how long they stayed. Ms Griffel shares her parents’ story as follows:

By that time (I think) my parents had left to marry as that date was August 4, 1930. My mother and father were born in 1909 and 1908 respectively, so they would have been older than other students there. They often spoke about how this fact brought them together. My dad told the story of how he had walked to the school and arrived after the school year had started, and Ms. Pettit (both spoke of her often in most kind words) allowed him to stay, but he had to sleep in the hallway. My dad would imitate (with respect) the high pitched voice of Ms. Pettit because she was the only one who ever called him William. He was always Bill to everyone else.

I think my dad probably stayed at the Boys’ House (later the library) and my mother at the house [Big Log] occupied by Katherine Pettit. 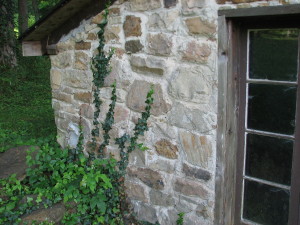 …My dad would tease my mom and say she trapped him in the “springhouse”…. I think the “springhouse” was actually where the generator was kept [Electrical Power House]. My dad became an electrician so that makes sense for him to have spent time there.

Both [of my parents] worked long hours, but often spoke of all they had learned and my dad spoke of making a musical instrument there (dulcimer maybe).

My parents were both very bright and learned quickly and mother often said their education had reached the tenth grade. Their experience there helped shaped their entire lives, and they both believed teachers were sacred because of the care and information given to them there. This was when the Depression was most gripping, and my dad traveled from one coal camp to another to find work. Eventually, he used the skills he’d learned [at PMSS] to become an electrician for General Motors and was a good provider for our family. My mother could do anything with sewing, crocheting, cooking, etc. They both felt loved by the staff at Pine Mountain.

At one time years ago, my mother wanted me to consider going to Antioch in Yellow Springs, Ohio, because some of her Pine Mountain teachers hailed from there.

Bonnie Mae McIntosh was born in 1909 in Buckhorn, Kentucky, to Fillmore McIntosh and Mary (Sandlin) McIntosh. She was living in Buckhorn and Hazard at the time that she attended Pine Mountain. She died on May 3, 1991, in Butler County, Ohio.