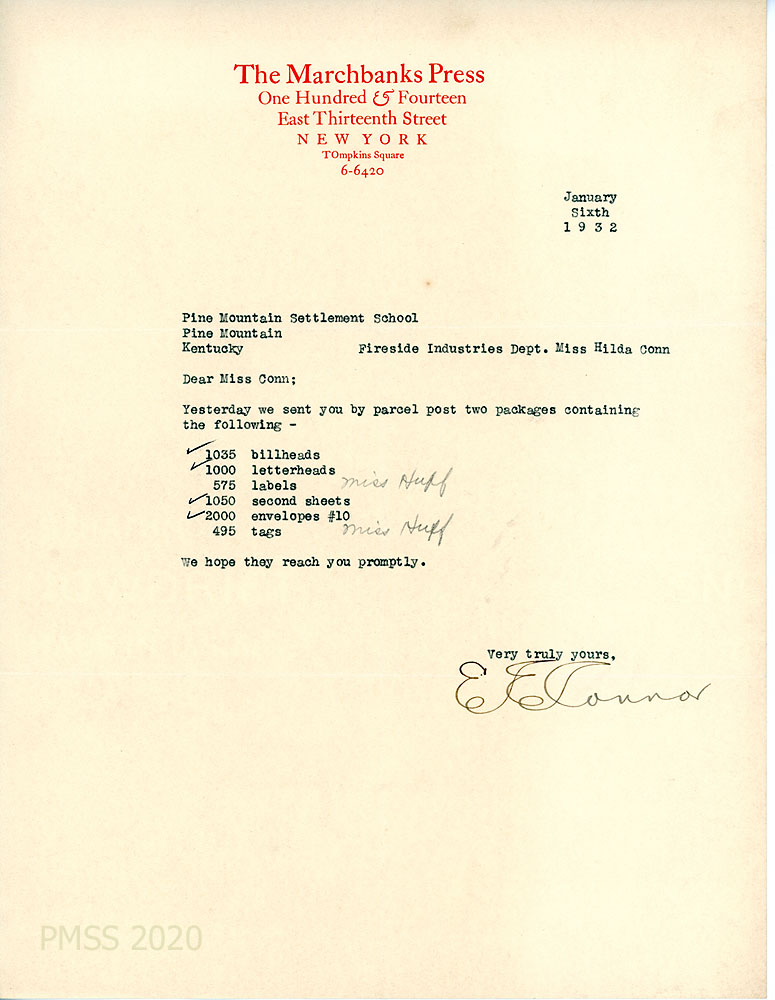 The following general correspondence of Pine Mountain Settlement School with The Marchbanks Press, Tompkins Square, New York City, NY, during the early years of the 1930s captures the high regard that Pine Mountain Administrations had for this leading printing company. Hal Marchbanks, the founder of Marchbanks, learned printing at an early age in his hometown of Ennis, Texas. The love of the trade and the skill of Marchbanks led him to New York and from 1913 (the year Pine Mountain Settlement was founded) onward “Marchbanks” became a leading printing establishment in New York City.

This correspondence helps to capture the high-level of respect that Pine Mountain had for the company and the long-standing camaraderie that Marchbanks established with the small settlement institution. The company provided the paper and printing needs of the School during several early administrations through the mid-1930s. The friendly relationship the School had with this well-known printer and paper supplier encouraged the Settlement School to establish their own printing operation during the administration of Glyn Morris. Marchbanks set the bar for quality and provided the institution with an industrial training opportunity.

The School’s printing workshop was led by two outstanding printing instructors, August Angel and Fred Burkhard. The two were supported and motivated especially by Glyn Morris, who was instrumental in building up the Print Shop at Pine Mountain Settlement.

[Note: Letters from PMSS staff in the PMSS Collections are carbon copies, typewritten, unsigned, and meant for the Office files. The original signed copies were sent to the correspondents. The initials at the bottom left of most PMSS letters indicate the writer (along with initials of the secretary). For example, HH are the initials for Hubert Hadley, PMSS Director, 1930-1931, EKW for Evelyn K. Wells, Acting Director in 1931, and GAM or GM for Glyn A. Morris, Director, 1931-1942.]

01 September 24, 1930. To Hubert Hadley from Hal Marchbanks, thanking Hadley for his September 19th letter and assuring him that “the corrections that you noted on the proof…will all be taken care of.”

02 January 20, 1931. To “Gentlemen” at The Marchbanks Press, NYC, from HH (Hadley), enclosing a copy of February “Notes from the Pine Mountain Settlement School”; asks for a proof; directs the Press concerning spaces between items in a certain section; requests 6,400 copies of the February 1931 issue.

03 January 29, 1931. To Mr. Marchbanks from HH (Hadley), returning the final proofread proof of the February Notes with revisions.

04 February 5, 1931. To The Marchbanks Press from HH (Hadley), thanking them for the revised Notes proof; returning all proofs.

05 February 5, 1931. Typewritten text of a telegram to The Marchbanks Press, unsigned, directing them to print Notes immediately from revised proof; lists 4 corrections.

06 April 27, 1931. To Miss Emily Connor, The Marchbanks Press, NYC, from EKW (Evelyn K. Wells), Acting Director. Wells asks her to check her final corrections on the Pine Mountain Letter to see whether an error was hers or the Press’s. “You will be glad to hear that the letter is bearing good fruit.” Urges Conner and Mr. Marchbanks to visit PMSS.

07 September 21, 1931. To The Marchbanks Press, from GAM (Glyn A. Morris, Director), enclosing the October Notes and asking for 6,000 printed copies; asks for proof.

09 January 28, 1932. To The Marchbanks Press from GM (Morris), enclosing the financial statement for February Notes which the Press is printing; asks for proof.

10 February 4, 1932. To The Marchbanks Press from GM (Morris), sending a revised financial statement for the February Notes and directing that it should be included only if there is room.

11 September 19, 1932. To The Marchbanks Press from GM (Morris), enclosing a copy of October Notes; asks for proof.

12 September 27, 1932. To The Marchbanks Press from GM (Morris), returning a corrected proof for Notes and asking for 5,000 printed copies.

13 October 10, 1932. To Morris from Hal Marchbanks. Noticing a Notes article about the PMSS print shop, Marchbanks offers to send the School some fonts that his company no longer uses. He also suggest that Morris write Mr. Porter Garnett of the Laboratory Press, Carnegie Institute, Pittsburgh, PA, and ask for “specimen sheets of the things he is doing. These may be used to encourage the boys in the school and to show how good printing should be done….”

14 October 18, 1932. To Mr. Marchbanks from GM (Morris), thanking him for his offers to send type (fonts) for the School’s print shop. Morris is sending Marchbanks samples of the font that the School uses. He describes his plans for using the print shop for the School’s needs; asks for 500 additional copies of October Notes.

15 October 29, 1932. To Morris from Mr. Marchbanks, who has received the sample fonts and will send Morris “some type and material.” Marchbanks agrees that the print shop will save the School money, “but better than that, is the teaching of your boys the elements of the printing trade which I regard as about the best thing anybody can learn.” He suggests that the printer in charge of the shop may learn from the printing trade magazines and gives their names and addresses. “…[Y]ou might mention my name as I know both the editors of the magazines very well.”

17 November 21, 1932. To Mr. Marchbanks from (unsigned), thanking him for his October 29 letter. Morris is writing the trade journals and the “boys are eagerly awaiting the arrival of the printing equipment….” He changed an order for Christmas cards to 1,000.

19 March 7, 1933. To Morris from Hal Marchbanks, recommending The Louisville (KY) Paper Company and the Standard Paper Company in Cincinnati, OH, as good companies to work with.

20 October 19, 1933. To The Marchbanks Press from Morris, enclosing a copy of the November Notes and asking for a proof. He also encloses a copy of April 1926 Notes as an example of the style Marchbanks should use. Asks if their price on envelopes for sending out the Notes is cheaper than Caxton Press, which printed the last order.

21 October 23, 1933. To Morris from E. E. Connor, The Marchbanks Press, stating that he will receive the proof for November 1933 Notes soon. States pricing for an envelope and encloses a sample.

22 October 27, 1933. To Marchbanks Press from Morris, enclosing corrected proof and ordering 9,000 copies. Referring to Mr. Marchbanks’ conversation with Evelyn Wells last year, Morris orders a cheaper grade of paper, “which would not detract from the appearance of the Notes.”

23 October 30, 1933. To Morris from K. Adcock, The Marchbanks Press, NY, confirming receipt of the proof and the order for 9,000 November Notes. An inexpensive paper that “looks very well” will be used. 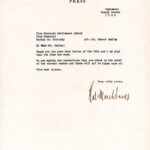 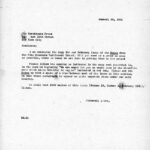 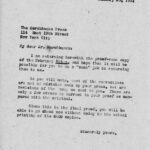 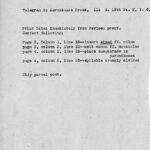 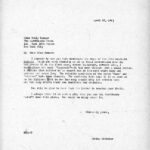 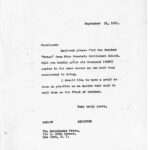 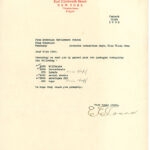 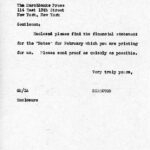 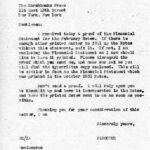 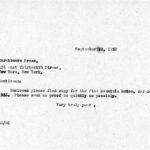 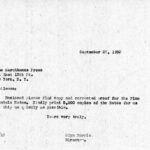 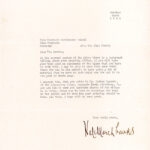 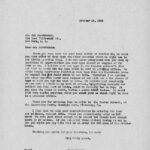 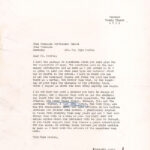 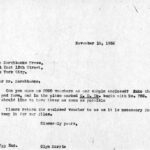 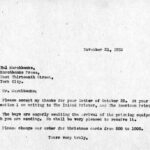 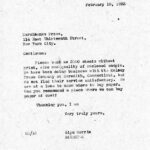 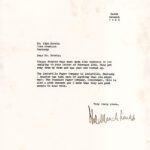 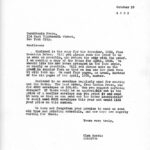 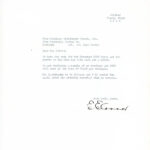 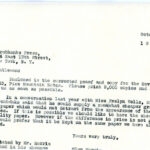 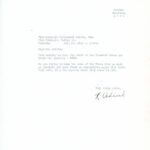