Page 3
EDITORIAL – MOUNTAINEERS AND VITALITY
“With the blood of our ancestors flowing in our veins, let us like they, meet boldly adversities and play heartily when evenings come.”

Page 4
ARNIE HALL RETURNS with stories of his visit to New York City where he did repair carpentry for Dr. Esterbrook.

SOUTH TO THE BORDER
Two members of the Youth Hostelers of America, Zeta Barbour and Eudora Stegner, on a bicycle trip from New York City to Mexico and South America, stopped at PMSS for the weekend.

Page 5
“SAGAMAN” CHASE VISITS SCHOOL
Mr. and Mrs. Richard Chase visited PMSS on one of their tours through the southern states. See excerpt from American Magazine, which described Mr. Chase as the “Sagaman” and lists him among its “Interesting People.”

COMMUNITY DAY AT PINE MOUNTAIN
Students and community attended Fairday; sang folk songs on the School House lawn, exhibited livestock and poultry, displayed weaving, art and antiques in the Workshop, listened to ballads by Abner Boggs and “Singing” Willie Nolan, competed in hog-calling, watched a play, “The Pink Ribbon,” by John Spelman in the School House, danced on the playground and at Laurel House in the evening.

NEW FIRES TO BE GIVEN
Miss Hackman will be the director of a 3-act play, New Fires, to be presented November 18; see a synopsis of the play and a critique. See list of cast members.

Page 7
GOBBLING CHIPMUNK – A story about Mr. [William] Hayes‘ hunt for a turkey that turned out to be a chipmunk.

Page 8
GETTING AN EARLY START – While Mr. Spelman’s A-2 Art Class were drawing house plans, Donald was accused by the teacher for talking too much.

THIS ISSUE – “The Pine Cone staff has written all copy for this issue. Charles Hollins has set the type on the Linotype. Walter Revis, Robert Blanton, Perry Caudill, Oral Howard, and Burton Creech have helped with the make-up and presswork.”

TO WHOM IT MAY CONCERN – A statement by Oral “Fatso” Howard that he did not “spill a case of 6 point type in the Print Shop” but that Robert Blanton was to blame. 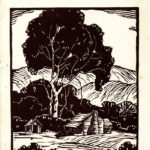 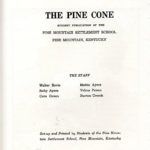 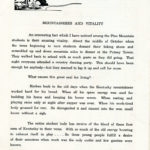 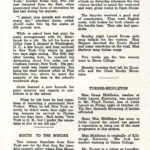 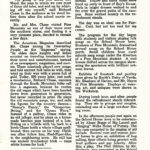 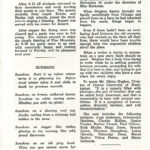 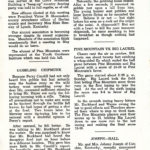 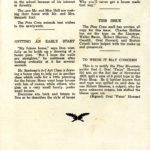