The “Proposed By-Laws 1988” were adopted at the Fall board meeting.

The critical damage from termites and powder post beetles to Old Log support structure, and the immediate need for repair, requiring Burton and Mary Rogers to move to another residence, was reported.

The Pine Mountain Community Clinic Board was granted a 5-year agreement for use of Hill House (Infirmary), in the hope that Clinic services can be continued with other sponsorship if the Frontier Nursing Service cannot continue the operation.

Director Paul Hayes filed a Citizen’s complaint against the Dollar Branch Coal Co. with the Office of Surface Mining. The coal washer operation, on property adjoining PMSS land, had been closed for more than a year, with no reclamation done. Without proper reclamation, there would be the possibility of damage to PMSS property. 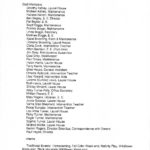 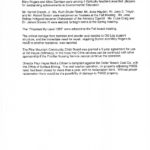