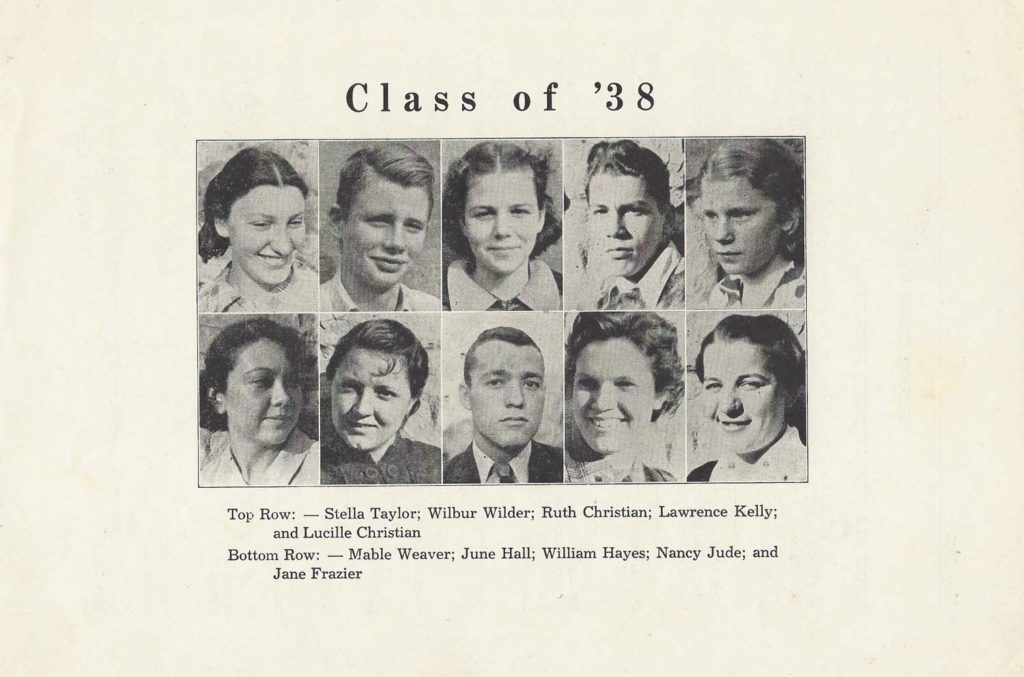 Wilbur Earl Wilder attended Pine Mountain Settlement School (PMSS) during the late 1930s as a boarding student. Along with his work assignments and studies, he was active in the many extra-curricular pastimes that the School had to offer.

Wilbur’s interests appeared to lean toward acting, folk dancing, and writing. His acting experiences included playing parts in the Tomfoolery play of 1935. The Tomfoolery plays, created only by the male students and staff at the School, were annual events for the boarding school students beginning in 1934. They consisted of a series of whimsical and quasi-silly vignettes that reflected on life’s absurdities. Wilbur appeared in the second Tomfoolery play at PMSS. The School’s student publication, The Pine Cone of October 1935, featured a front-page article describing the skits and actors. It listed Wilbur Wilder as a soloist in “Daisy Bell.”

Wilbur was also involved in folk dancing, a tradition that the School was intent on keeping alive. In the May Day events of 1939, he performed in sets II and IV of “The Health,” the class dance of the Juniors and Seniors. In the 1940 May Day celebration, he danced in sets I and IV of a Danish dance (“The Hatter”) and took part in a Sword Dance (“Winlaton”).

In November 1938, Wilbur was among the eight students from Pine Mountain who traveled to New York City, where an evening of folk music and dance was staged in the Town Hall. The students, including Wilbur, presented the Kentucky Running Set in a fundraising effort for the School.

Besides his participation in plays and folk dances, Wilbur demonstrated an appreciable amount of writing talent during his student years and afterward in a letter to Alice Cobb*. In the May 1937 issue of The Pine Cone, he is listed as the sports editor on page 2. The Pine Cone of October 1938 (page 5) announced Wilbur Wilder as second place winner of the Silver Jubilee poster contest. His poem “Our World” was published on page 3 of the same issue:

OUR WORLD
Wonderful world in which we live,
What more is there that we could give?
We give our hours, gay and long,
We give our hearts in smile and song.

We give our thoughts, some bleak, some mild,
Oft act before you like a child;
We seldom try to do our best,
And never give you any rest.
We always quarrel and fight for more,
In every decade there’s a war;
We’d like to love each other’s ways,
Oh world, give us more peaceful days!
— Wilbur Wilder, The Pine Cone, 1938 October, page 3.

Although Wilbur graduated with the Class of 1938, records (including the 1940 U.S. Census) indicate that he was at the School through 1940.

Only a few clues about his experiences after Pine Mountain were found in the PMSS Archives and in other sources.

The “Alumni News” column in The Pine Cone of February 1941 reported on page 3 that Wilbur was in training in the Canadian Air Force in Ontario, Canada.

The Pine Cone of October 1948 (page 8) featured a column titled “Gulliver’s Travels” by Bobbie Johnson that details the travels of staff during summer months of that year. Included were the travels to California by Miss Grace Rood, a PMSS nurse, who visited Wilbur in Los Angeles. She noted that he was working toward a degree at the University of Southern California. Later, on the same page was the following statement: “Wilbur Wilder and his bride stopped in (at PMSS) on their way back from their honeymoon.”

*A telling example of Wilbur’s writing abilities was displayed in his 1945 letter to a PMSS teacher, Miss Alice Cobb. Stationed at Okinawa near the end of World War II, he describes his time as a soldier and his fond memories of Pine Mountain. See images and a transcript of this letter here: Wilbur Wilder WWII Letter. Miss Cobb responded on December 6, 1945, with these words of encouragement:

Your very special letter was enjoyed by a number of us who know you, and I want to tell you how very happy we are to hear from you. … I have been so much impressed with your way of writing, and wish that you would keep a diary, or quickly write some reminiscences of what your life has been during the war years. I think the time is coming when information will be sought, and much will be forgotten if people like you do not have it in black and white — and with your very facile handling of English. I should think you might do some good things for publication…

Wilbur Earl Wilder was born on July 15, 1922, in Indiana. His mother’s maiden name was Huff.