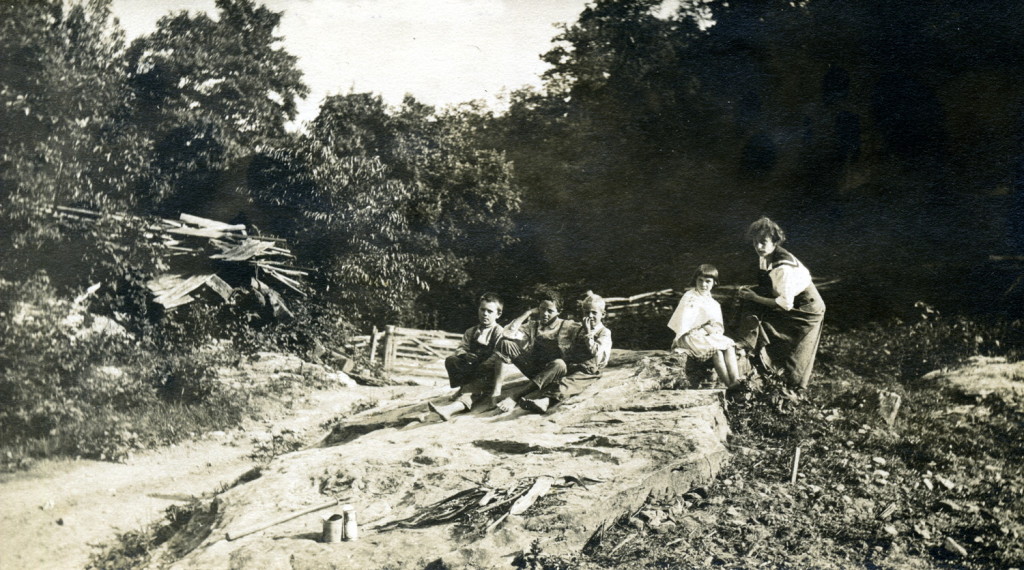 Catherine Rittenhouse came to Pine Mountain Settlement School as a volunteer worker in 1914, the second year of the School.  She was accompanied by Mary Dana who also worked for the same period of time.

Catherine Rittenhouse was born May 31, 1886, in Minnesota and she died March 22, 1958,in Minneapolis, Hennepin Co., Minnesota. She is the daughter of Charles Edwin Rittenhouse and Grace Hubbell. Catherine married Leroy V. “Lee” Sanford. He was born January 1, 1886, in Illinois, [1930 Census]  ]

Catherine Rittenhouses’ husband Leroy Sanford sent her letters and photograph album to Pine Mountain in 1958 to be held in the archive at the School.

As a volunteer at the school Catherine was engaged in many activities. While there she recorded her work, her reflections, and the life of the school in both letters home and in photographic images. Following her death in 1958, her husband, Leroy V. Sanford, sent her early letters and her images to Pine Mountain Settlement School to be added to the archive.  The letters reflect life at the School in the second year of its life.

As was common among workers at Pine Mountain, that the individuals at the school and many community members were either referred to by a simple letter, i.e. “Miss R” (Dora Reed Goodale), “Miss L” (Ethel De Long), “Miss P” (Katherine Pettit), etc.. Or, names were disguised, as was the case with the names of community folk in the following letters. A cryptic guide to personal identification was included on the envelope that her husband used to mail the Rittenhouse letters to the School. The letter from Mr. Leroy V. Sanford that accompanied the images and letters follows:

The recent death on March 22nd of my wife, Mrs. Catherine Rittenhouse Sanford, has prompted me to write you this letter.

In the summer of 1914, shortly before our marriage which occurred in 1915, Mrs. Sanford — then Miss Catherine Rittenhouse — and a close friend and distant relative of hers, Miss Mary Dana (who later became Mrs. C.V. Kennedy and is now deceased) spent about six weeks as voluntary workers at the Pine Mountain Settlement School which had been started shortly before that time. As you can well imagine, they worked under very primitive conditions doing some teaching and performing such other tasks as were necessary at the time.

Mrs. Sanford often spoke of the time she spent down there, which she regarded as one of the most interesting and rewarding experiences of her entire lifetime. She always followed the gradual development of the school with great interest and has sent small contributions from time to time at the Christmas season.

At the time of her death, my daughters and I suggested memorials to Plymouth Congregational Church of this city, of which my wife and I have been members for over forty years. Out of the amount received, I have requested the Church to forward to you the sum of $25 as a memorial to Mrs. Sanford.

I am enclosing a transcript which Mrs. Sanford made of the letters which she wrote to her parents while she was down there. She often spoke of Mr. William Creech who, as I understand it, was one of the founders of the school, and must have been a very interesting character. I trust you will find this of interest. In any event it is yours for such disposition as you see fit.