A widower from Big Creek arrived to enter his seven children in the School ; two years ago we could only take one and he declined ; brought letter of recommendation with photo of children ; spoke of his hard work and dream for the children to be raised right ; School lacks money for them ; father will return with children in 10 days ; 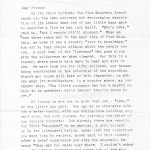 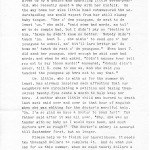 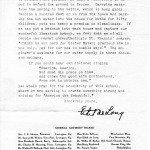 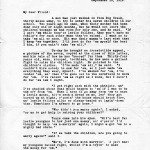 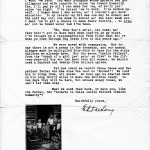 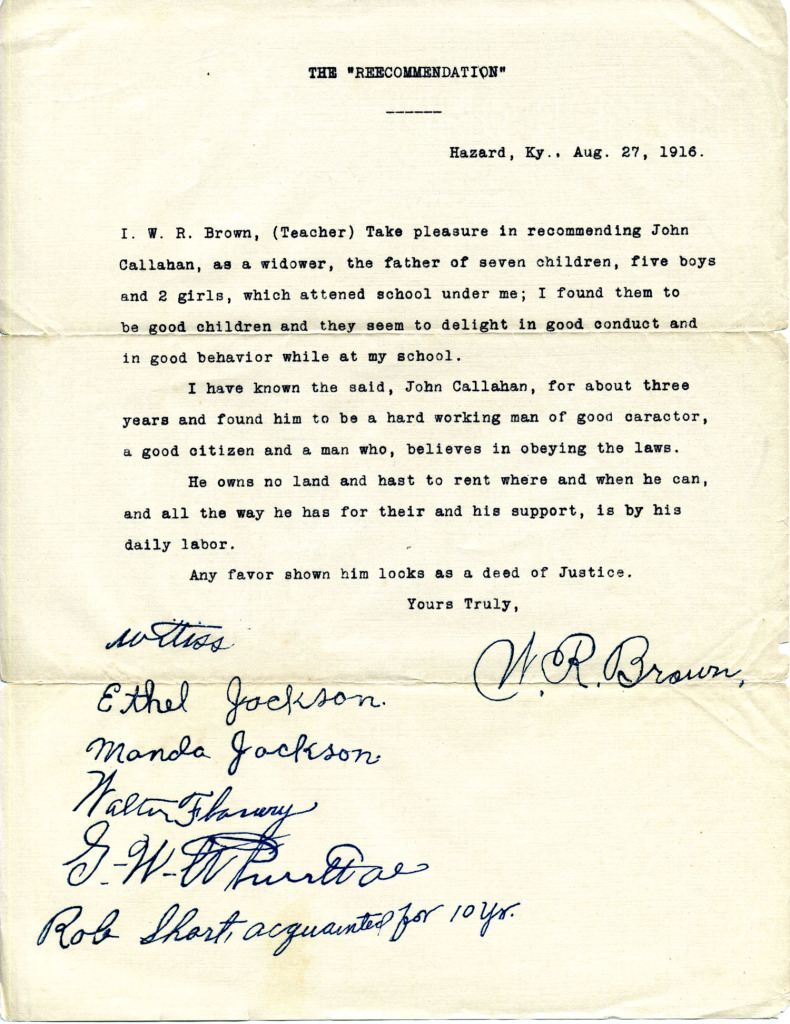 Dear Friend:
On its third birthday the Pine Mountain School sends you the same accurate and encouraging description of its status that one of our little boys gave to describe a fire he had just built. “Hit’s weak,” said he, “but I reckon hit’ll prosper.” When we came three years ago to the back side of Pine Mountain, we knew it was a country “lost to knowledge,” but not to that vision without which the people perish. A good deal of the “lostness” has gone along with the wilderness we have cleared. For this is a country where people have ears to hear and eyes to see. We have room now for fifty children, our houses being constructed on the principle of the accordion. Almost any house will take on this character, no matter what its architecture, in a country where, as one father says, “the little younguns has tuk a mighty notion to be upheaded; hit’s larnin’ they’re bound to get.”

Of course we are not on both feet yet — “weak,” as the little boy said. How can we be otherwise without a water supply, with our dining-room building only half done, and with pledges for scarcely one-third of our running expenses? But already there are results. Our first “daughter” to be married, a girl brought up in the lonesomest hollow, under just the condition you most long to relieve, moved back to this country after a brief experience yon side the mountain, because “They was too nasty over there. I couldn’t stand ’em; they threw dishwater and ashes out o’ the window.” Your money invested here is bearing interest in her tiny, immaculate house, set in a yard undisfigured by old rags, tin cans, or trash, where one…

…clean-washed housecloth, drying on the fence, bears testimony to its owner’s standards.

One could not ask for better returns than those given us by a quaint and sparkling little seven-year-old, who recently spent a day with her kinfolk. On the way home her wise little head outmeasured the understanding one would expect from her still clumsy baby tongue. “One o’ dem younguns, de next to de least ‘un,” she said, “said some bad words, an tol’ me to do sompin bad, but I didn’t pay no ‘tention to him, ‘tause he didn’t know no better. Nobody didn’t teach ‘im. Aunt T–, she aimin’ to send one o’ her younguns to school, an’ hit’ll larn better an’ do home an’ teach de rest o’ de younguns.” When Aunt T– did send her youngun, sure enough he said some bad words; and when he was asked, “Didn’t anyone ever tell you not to say those words?” answered, “Nobody didn’t never, till E– come to see us, and she said you teached the younguns up here not to say that.”

Dr. Little, who is with us for the summer at least, has already inspired such affection that our neighbors are circulating a petition and taxing themselves twenty-five cents a month to help keep her here. A mother whose little child was burned to death last week said over and over in that hour of anguish when she was waiting for the doctor’s merciful help, “Oh, I’m so glad we have a doctor to send for!” The father said after it was all over, “Why, she was as tender with my baby as I would have been, and most doctors are so rough!” The doctor’s salary is assured till September first, but no longer.

Please help us to finish our Laurel House. It needs two thousand dollars to complete it. And do what you can for us this summer, when we need twenty dollars a day more than is pledged. Our children are having a vacation this month, but begin their summer term about the first of June. in our neighbors’ view, summer is…

…the most important season for learning, yet it is the leanest for our treasury. Annual subscriptions for sums from one dollar up, payable in any month from May to October, are golden. We want a reservoir, to be put in before the ground is frozen. Carrying water from the spring to the kettle, which is hung gypsy fashion a hundred feet or so from the house and packing the hot water into the house for baths for fifty children, put too heavy a premium on cleanliness. If we can put a bathtub into each house and capture our wonderful limestone branch, we feel that we of all people can repeat understandingly St. Francis’ prayer: “Thanks be our Lord for Sister Water; precious she is and holy, yet for our use in humble ways.” The engineer’s estimate for our water supply is three thousand dollars.

If you could hear our children singing

“America, America,
God shed His grace on thee,
And crown thy good with brotherhood,
From sea to shining sea.”

you would pray for the prosperity of this school, where we are working to create something strong and shining for “American the Beautiful.”

[Printed at end of page: list of General Advisory Board members and their cities and states.]

My dear Friend:
A man has just walked in from Big Creek, thirty miles away, to try to enter his seven children in our school. Two years ago he came, when their mother had been dead only six or eight months, but he would not leave the children because we had room for only one, and he said, “If I part ’em while they’re leetle fellers, they won’t have no feelin’s fer each other when they’re raised. I want ye to take ’em all or none. Hit was their mammy’s last wish that I keep ’em together. I’ll jest do fer ’em myself the best I kin, if you cain’t take ’em all.”

To-day he brought an irresistible appeal, — a picture of the seven, copied at the close of this letter, and his tale of how he has “keered” from them. Thirty-four years old, worn, stooped, toothless, he has made a gallant fight to raise his children right. He pointed to the children’s clothes. “I’ve made ’em all,” he said. “I couldn’t hire nobody to sew fer ’em, so I jest made ’em everything they wear, myself. I’ve washed fer ’em, I’ve tended ’em, an’ then I’ve gone out in the cornfield to work fer ’em. I’ve raised ’em as right as I know, but I cain’t do fer ’em lak I ought.

“I get right sick with the phthisic, an’ I’ve studied about what would happen to ’em if I was to be tuk off from ’em. When I have to go away from ’em to earn a leetle money, hit’s sech a dread on me, les’ they git burned up at night, s’posin’ the house should ketch fire, an’ leetle fellers allus so sleepy-headed at layin’-down time. Sometimes I’m afeared to go home.”

“Why didn’t you marry again”, I asked, “so as to get help in raising your children?”

Tears came into his eyes. “Hit’s best for leetle younguns to hev jest one mammy, an’ s’posin’ I’d thought to help ’em a-marryin’ again, I might a got ’em in a mighty bad state.”

“If we take the children, are you going to marry again?” said I.

-2-
“Yes”, he said, “I know. That’s the reason I want ’em here. You want younguns whose parents has got diligence and with innards to raise ’em toward humanity. Yes, I’ll pay ye all I can make fer ’em, ef ye’ll jes’ raise ’em right. I’ve raised ’em to work. I’ve worked myself. I begun when I was seven, an’ I couldn’t git much education. In my raisin’-up hit was one day in school and the next day out; one week in school an’ the next week out. I want ’em to git a chance to make their livin’s, — to live, an’ not be bowed under lak I’ve been.

“No, they don’t sw’ar, ner cuss; an’ they hain’t got no mean ways when they’re in my sight. I’ve brought ye a recommendation from folks that met you when ye come through Big Creek five or six years ago.”

We were moved with compassion. But today there is not a penny in the treasury, and our annual pledges must be multiplied four-fold to care for the sixty children we already have. For the seven “leetle fellers”, from the “chunk of a girl jes’ goin’ on five” to the fifteen-year-old boy who has hoed corn all summer, we should need a hundred and twenty-five dollars apiece.

Yet how could we resist those faces and the patient father who has done the best he “knowed”! We told him to bring them, all seven. An hour ago he started back on his long thirty miles to make the children ready. In ten days they will be here, but unless money comes, we can’t let them stay.

Must we send them back, or have you, like the father, the “innards to raise leetle fellers towards humanity”?

I. W. R. Brown, (Teacher) Take pleasure in recommending John Callahan, as a widower, the father of seven children, five boys and 2 girls, which atten[d]ed school under me; I found them to be good children and they seem to delight in good conduct and in good behavior while at my school.

I have known the said, John Callahan, for about three years and found him to be a hard working man of good c[h]aract[e]r, a good citizen and a man who, believes in obeying the laws.

He owns no land and hast to rent where and when he can, and all the way he has for their and his support, is by his daily labor.

Any favor shown him looks as a deed of Justice.