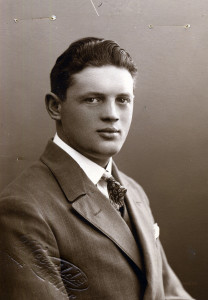 It was early spring 1929 and the Pine Mountain Settlement School was in urgent need for new farmer as soon as possible. The current farmer was leaving July first for work as a county agent.

In desperation, Katherine Pettit, co-founder of the School, wrote for advice from her colleague, Olive Dame Campbell, founder of the John C. Campbell Folk School in Brasstown, North Carolina. Pettit knew that the Campbell School had a Danish farmer, “Georg” [Bidstrup], on staff and she hoped that Mrs. Campbell would know how Pettit could find one for Pine Mountain.

From her Danish farmer, Mrs. Campbell learned of the Husmandsskole, an agriculture school in Odense, Denmark. Both Campbell and Pettit wrote letters to Mr. Jakob Lange, principal of the school, asking about the possibility of hiring a gardener for Pine Mountain. In her letter of March 26, 1929, Miss Pettit described the position she hoped to fill and at the same time provided a glimpse of the School itself:

We have a truck garden which we plant solely for our own use and it is one of the greatest assets of the school, as it is an expensive matter to bring food in. We have no good roads here. What I want, therefore, is primarily a good gardner (sic), but I also want a man with the possibility of growing into an executive position in the school. We operate our own coal bank; we have roads and grounds to take care of, a reservoir, an electric lighting plant and sixteen cottages, and there is great need for a man who can develop into the person who can take charge of this outside work and do it well; but above all things, we want a man of fine character who will, in his daily life, be an example to our boys.

The farmer or gardner does most of his work with student labor, and, therefore, should be able to work well with boys and direct them. The training, which he give them, is part of their schooling. the gardner has charge also of the ordering of supplies for his department, and for the poultry yard and dairy….The present farmer has been [teaching], also, classes in agriculture to certain of the grades, and we should be glad to continue this.

Soon after receiving Pettit’s letter, Principal Lange of the Husmandsskole responded that he thought he had found a good match in Mr. Peder Moller,

…a young man with varied experience in agriculture, gardening, some office-work, etc. He is a son of one of my neighbours and he just came home from a 4-month’s stay as student at “Fircroft” College [of Adult Education] near Birmingham [U.K.]. (He speaks very good English.)

Miss Pettit, upon further advice from Mrs. Campbell, offered a salary of $100 a month with board, to which Lange agreed. Lange assured Pettit that Moller was a non-smoker and would arrive in October. This was much too late a time for the School’s needs and Pettit appealed to the American Consular Service in Copenhagen to expedite the paperwork so that Moller could arrive mid-August when the School begins.

Meanwhile, Moller and Pettit begin corresponding, each quite pleased with what the other had to say. Moller, born c. 1907 in Vornmeryn, Denmark, wrote In July 1929 about his eagerness for the job and listed his credentials:

From Miss [Lula] Hale, who is visiting the smallholders highschool in Odense, I have heard so much about your school, and I am quite sure it is the right place for me, I am rather handy, and should like to come to a place, where I can work with as many different things as in your school.

As a son of a farmer and a keen gardener I think I am able to fulfill my engagements, again I know a good deal about highschools. I am coming very often to Mr. Lange’s school, last year I was working there half a year as gardener, and I have last winter been a student at Fircroft highschool, Birmingham, England.

I have travelled rather much, last year I have been on a trip to…most of the countries in Europe and North Africa, now I should be very much pleased to be able to come to U.S.A.

Later, an August 29, 1929, letter from Pettit to Moller described the duties of a farmer/gardener:

All the work on the place is done by the school under the direction of the manual training teacher and the man we call our farmer, but his activities are varied. He looks after the coal mine, farm garden (to raise vegetables for about 100 students and 25 workers), forestry, roads, dairy, poultry, night watchman, team of mules, upkeep of farm and garden tools, freight at the junction, etc….[and maintenance of Isaac’s Run to prevent flooding].

Moller’s arrival in mid-August was not to be. The consulate refused to process Moller’s application for a visa out of turn and many were ahead of him. Neither was Moller able to arrive later in October. Even an appeal by Angela Melville (Associate Director, 1928-1930) to Mr. Chris L Christensen, Secretary of the Federal Farm Board in Washington, D.C., was of little use.

Again Moller’s probable arrival date was moved, this time to June 1930. Pettit, after much searching, was able to “secure one of our old boys” (Brit Wilder) to manage the outside work in the meantime.

Moller finally arrived at Pine Mountain Settlement School in November 1930. By that time Pettit had left the School and Hubert Hadley replaced her as director. For a short time Moller seems to have managed well and was acclimating to the new geography and to the new culture. In 1931 Glyn Morris arrived at Pine Mountain to take on the role of Director. Morris was just out of school at the theological seminary at Union in New York. He was a Progressive and heavily influenced by the educational philosophy of John Dewey and by the theological and social ideas of Reinhold Niebuhr. He was only twenty-seven years old.

By all accounts Morris and Moller hit it off well and, as an avid agriculturalist, Morris strongly supported the farm and Moller’s work. Moller’s contract was renewed in June 1931 and his salary raised to $110 a month with board, laundry at $1.00 a month, and one month’s vacation with pay in every twelve months. It was signed by Evelyn K. Wells, by then the School’s acting director. Records indicate that 1932 was Moller’s last year at the School. The events leading to his departure are complex, but vividly reflect the problems he encountered at PMSS.

By 1932, according to Morris, his honeymoon was over. He found himself in the midst of a union war in Harlan County. In his autobiography, Less Travelled Roads, Morris notes that Harlan County saw no less than 132 articles in the Kentucky Courier-Journal newspaper about activities of the IWW (International Workers of the World) in Harlan County who came to support the miners who were trying to unionize. A chance meeting with Arnold Johnson, a fellow seminarian at Union and an active supporter of the IWW, led to a series of unfortunate entanglements. Johnson was in Harlan as a member of the Fellowship of Reconciliation and Morris, delighted to see his fellow classmate, entertained Johnson at his home. Quickly the news spread that Morris, and by association, Pine Mountain staff were union sympathizers and “communist furriners” were at work in the county. After some tangled negotiations and conversations, Morris met with Sheriff Blair in Harlan and attempted to set the record straight. After lengthy conversation, Morris managed to convince Sheriff Blair and by now an agitated Board of Trustees, that he was not of the same mind as Johnson and that he was at the School to “make Pine Mountain an educational force in the area.” He managed to put many minds at ease but he also learned a hard lesson. In his words,

There have been too many fly-by-night reformers here, who come in, make a splash, but don’t stay here to face the consequences. I had begun to learn a hard lesson. Change comes about slowly, and begins with the commitment of individuals. [Morris p.66]

But Morris, Moller and others at the School were clearly seen as “furriners” a favorite name for those who were not born in the country but that now extended to all who were not born in the county. Morris quickly learned how important it was to moderate his remarks and to temper his politics. Soon he would need to learn how to negotiate confrontation for the hardest of tasks — confrontations that end in death.

May Day in 1932 was a festive time. The campus was open to the community to join in the celebratory events. One of the young men who came to campus that day had something other than celebration on his mind, Drunk and carrying a pistol, Walter Day was looking for trouble. After insulting a student and his girlfriend he found himself struck to the ground by the insulted student, Reid Johnson. As Reid walked away, his back to Walter Day, Day pulled his gun, fired once and killed Reid with a shot to his back that nicked his heart. Moller was on the scene just after the incident and, profoundly disturbed by the event, volunteered to accompany Morris to Clover Fork, on the other side of Black Mountain to notify the parents of the unfortunate student. On the journey Moller wrenched his ankle and in physical pain and mental pain he tried his best to lend support to the family and to Morris. Whether as a result of his “furriner” aura or his growing autocratic management style at the School, Moller became a focus for the anger of the community surrounding the shooting event. Morris received news that Moller’s life was being threatened and by the end of the week Moller had packed up and left Harlan County. Morris reports in his autobiography that Moller returned to Denmark where he became a successful dealer in farm machinery but not before WWI came to his door-step and exposed him to global terror.

Walter Day was tried in Harlan County court and sentenced to five years in the State Penitentiary. He was paroled after serving just short of three years of his sentence. Morris reflected in his book that “Violence is, I suspect, less unpopular than we care to admit.” [Morris p.137] Apparently, war also has a short memory.