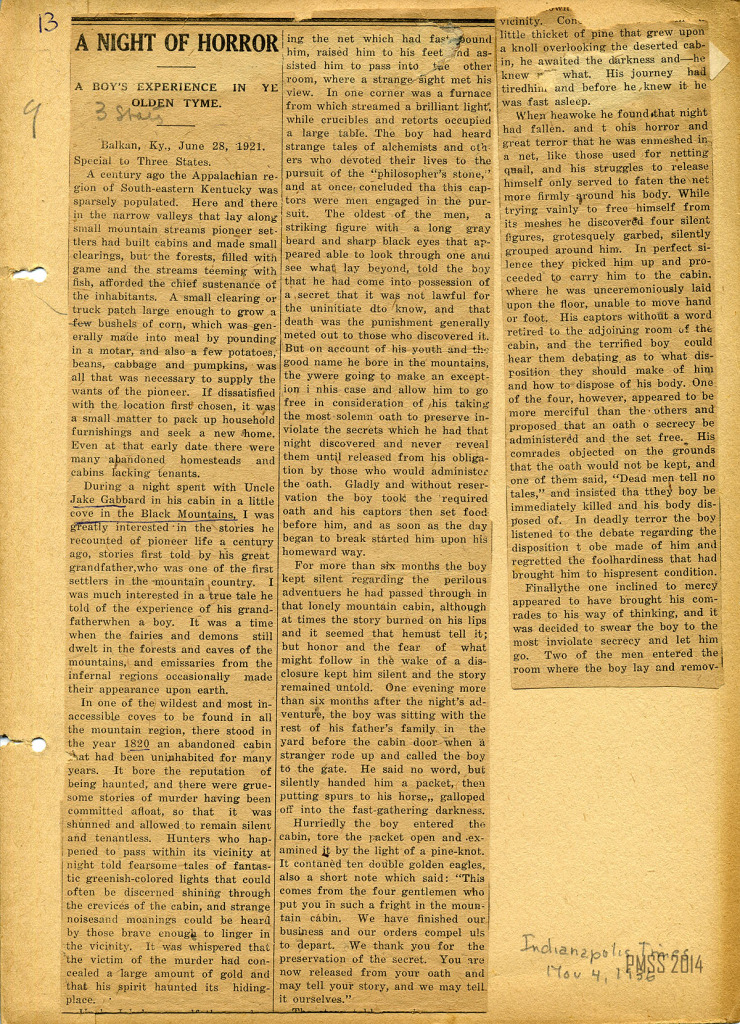 A NIGHT OF HORROR: A BOY’S EXPERIENCE IN YE OLDEN TIME

A century ago the Appalachian region of South-eastern Kentucky was sparsely populated.  Here and there in the narrow valleys that lay along small mountain streams pioneer settlers had built cabins and made small clearings, but the forests, filled with game and the streams teeming with fish, afforded the chief sustenance of the inhabitants.  A small clearing or truck patch large enough to grow a few bushels of corn, which was generally made into meal by pounding in a mortar, and also a few potatoes, beans, cabbage and pumpkins, was all that was necessary to supply the wants of the pioneer.  If dissatisfied with the location first chosen, it was a small matter to  pack up  the household furnishings and seek a new home.  Even at that early date there were many abandoned homesteads and cabins lacking tenants.

During a night spent with Uncle Jake Gabbard in his cabin in a little cove in the Black Mountains, I was greatly interested in the stories he recounted of pioneer life a century ago, stories first told by the great grandfather, who was one of the first settlers in the mountain country.  I was much interested in a true tale he told of the experience of his grandfather when a boy. It was a time when the fairies and demons still dwelt in the forests and caves of the mountains, and emissaries from the infernal regions  occasionally made their appearance upon earth.

In one of the wildest and inaccessible coves to be found in all the mountain regions, there stood in the year 1820 an abandoned cabin that had been uninhabited for many years.  It bore the reputation of being haunted, and there were gruesome stories of murder having been committed afloat, so that it was shunned and allowed to remain silent and tenantless.  Hunters who happened to pass within its vicinity at night told fearsome tales of fantastic greenish-colored lights that could often be discerned shining through the crevices of the cabin, and strange noises and moanings could be heard by those brave enough to linger in the vicinity.  It was whispered that the victim of the murder had concealed a large amount of gold and that his spirit haunted its hiding place. u