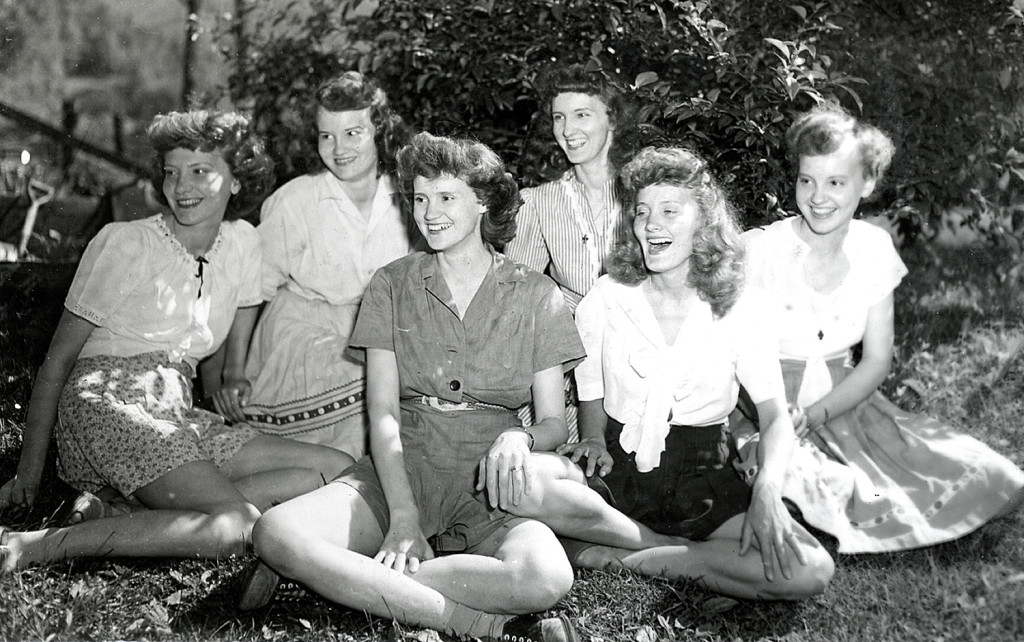 Bonnie Ayers was the fifth youngest of six Ayers sisters who attended Pine Mountain Settlement School (PMSS) in the 1930s and 1940s. Each sister had her own interests and skills and each left an indelible mark on the School.

Letters to Her Parents

During her years as a Pine Mountain boarding school student, 1939-1942, Bonnie Ayers wrote semi-annual letters to her parents, a requirement by the School in place of traditional report cards. Her handwritten letters, now part of the Pine Mountain Settlement School Collections, describe her improvements as well as shortcomings in her studies, industrial work, conduct, and leisure time activities. In all these areas, she was forthright concerning her progress, likes (current history, co-op, typing, and journalism), and dislikes (housework, biology, and chemistry).

About her conduct at the boarding school, she writes in the last of her self-evaluation letters, dated December 16, 1941,

By controlling my temper and by being more courteous to people in general I think I may learn to cooperate and live with people in any environment. In view of the present situation* it is very unthoughtful for any one to cause trouble. We all know the United States is in a very precarious position. Therefore I shall try to do my best at home and in school…helping my country wherever I am by my constant cooperation.

*Just nine days before Bonnie wrote this, on December 7, 1941, Japan had staged a surprise attack on Pearl Harbor, decimating the US Pacific Fleet. Within the next few days, America entered into a global war.

In all, her letters provide insight into the life of a boarding school student. They also give the impression of a young woman who was capable of forming strong viewpoints on a variety of issues.

From October 1940 through May 1941, Bonnie served as one of several reporters for The Pine Cone, a PMSS student publication, at the same time her older sister, Eleanor (Ellen or “Mattie”), was the assistant editor. After Eleanor graduated in 1941, Bonnie succeeded her as assistant editor. She apparently enjoyed this extracurricular activity which she continued into 1942, writing to her parents that “I am very much interested in journalism and hope to make it my career after the required amount of studying.”

From 1935 until 1943, the Works Progress Administration (WPA) funded the Pack Horse Library Project to create jobs during the Great Depression. Consisting of mostly women, the librarians rode horses or mules for miles over rocky, muddy, and hilly terrain in all kinds of weather to deliver reading material to isolated mountain homesteads and schools which otherwise had no access to libraries. In 1940, Edna Mae Patterson was in charge of this project at Pine Mountain. In early 1941, Bonnie became the School’s pack horse librarian.

As Bonnie traveled throughout the hills and hollows, she rode a horse named Sunny Jim. She paid tribute to her faithful companion in the April 1941 issue of The Pine Cone:

Well, ain’t he a purty hoss. Now I remember when Doc Newman rode him and he ain’t hardly changed a lick exceptin’ a few gray hairs and a little extry fat.” Such was the comment of a reader as she received her copies of Life and Readers Digest from the pack horse librarian. “Maybe you’d like to be on Sunny Jim when something scares him, but not me,” said the rider. “I don’t usually stay on him long when something does scare him.”

No one could play the Lone Ranger on Sunny Jim. Not that horse. When he hears the report of a twenty-two he acts like a wild bronco. And that is not all. He trembles like an aspen leaf for at least five minutes afterward. But Sunny Jim is not to blame. Think of the years he has spent walking up and down the creeks with a different rider every other time. Just as soon as he gets accustomed to one person the next generation comes along and jerks him the opposite way. Now, the poor beast does well if he plunges straight ahead. But just watch him go from Boys’ House to the barn. War Admiral? Man-o-War? No, just Sunny Jim going home after a trying day in the community, with a bouncing greenhorn on his back.

In a December 1941 letter, Bonnie expresses appreciation for her work as a pack horse librarian, stating that she “learned quite a bit about community and library work.” (This work) has influenced my life most this year. I have learned how people live under conditions which I thought were impossible; I have learned to appreciate more what I have.”

Just before Bonnie graduated in May 1942 as “Second Senior,” the student publication Conifer printed a summation of each graduate’s student years. Bonnie’s was listed as follows:

Bonnie Baldwin Ayers
Twila, Kentucky
Chief Interest – Journalism
Hobbies – Horseback riding and sun-bathing
“A chip off the old block”
“Bon” entered Pine Mountain in her Sophomore year. She was pack-horse Librarian last year in the Community Group. “Bon” has played one of the leading parts in “[the operetta H.M.S.] Pinafore,” impersonating Ralph Rackstraw. Bon is assistant editor of The Pine Cone and has also filled the Ayers’ pew in the choir.

After leaving Pine Mountain School, Bonnie received a degree in Political Science from Eastern Kentucky University, Richmond, Kentucky. In 1952 she received a law degree from the University of Kentucky Law School in Lexington, becoming one of the first women to do so. Soon after, she relocated to Arizona where she met Walter Herbert Shaw, Jr. (1930-2011). They were married on June 5, 1955, in Ganando, Arizona, where her sister Mattie and husband Arthur W. Dodd, a former PMSS teacher and principal, were living and likely participated in the ceremony. Bonnie and Walter were married for over 50 years. They had one son and two daughters.

During her years in Arizona, she worked for McNary Bank in Show Low, then as an administrator for the McNary Hospital (later known as the Navapache Regional Medical Center). She served on the Blue Ridge School District Governing Board (Lakeside, AZ) in the 1970s, and later became a real estate agent. Bonnie and Walter became longtime residents of Navajo County, Arizona, near the White Mountains. According to her obituary, “Spending time outside in the lovely White Mountains was one of her greatest joys.”

Bonnie Ayers died on April 13, 2007. She was survived by two of her sisters, Joanna Ayers Houseman in Show Low, Arizona, and Evelyn Ayers Howard of Harlan, Kentucky. 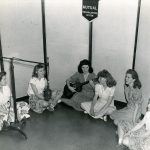 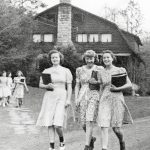 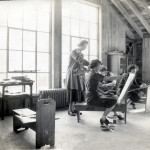 Vrena Ploeter, Art teacher at PMSS in top floor of Draper Industrial, 1937, with Bonnie [?] Ayers and two other students. X_100_workers_2561_mod.jpg