THE PINE MOUNTAIN STORY – CH. I

The booklet was written and illustrated in 1980 by Mary Rogers. Mary was a PMSS worker for over 50 years and wife of Burton Rogers, director of the School from 1949 to 1973. 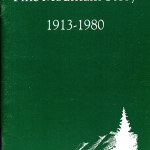 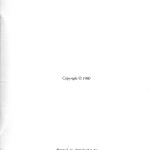 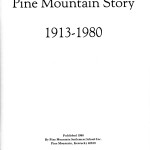 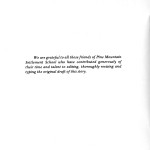 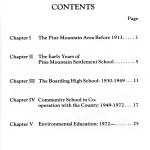 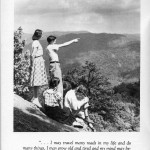 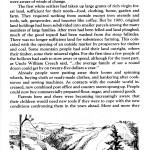 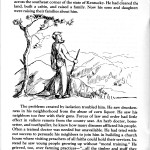 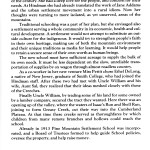 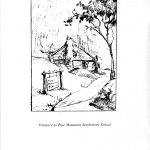 We are grateful to all those friends of Pine Mountain Settlement School who have contributed generously of their time and talent to editing, thoroughly revising and typing the original draft of this story.
ii

“. . . I may travel many roads in my life and do many things, I may grow old and tired and my mind may become worn out and forgetful, but I am thoroughly convinced that as long as I live there is no force in the universe could cause me to forget my living and growing and the close friends I have made at Pine Mountain…With grateful thanks.” [Caption for photograph of four students view distant scenery from mountaintop.]
iv

CHAPTER I
THE EARLY YEARS OF
PINE MOUNTAIN SETTLEMENT SCHOOL: 1913-1930
[This chapter title is apparently incorrect. It should be “THE PINE MOUNTAIN AREA BEFORE 1913.”]

In 1911 the railway reached Harlan. No one in the country could foresee the immense social changes that would come in its wake. But already the roadless, isolated, narrow valleys of the Cumberland Plateau were aware of winds of change.

The first white settlers had taken up large grants of rich virgin forest land, sufficient for their needs—food, clothing, home, garden and farm. They required nothing from outside except iron utensils and tools, salt, gunpowder, and luxuries like coffee. But by 1900, original land holdings had been subdivided into smaller parcels among the many members of large families. After trees had been felled and land ploughed, much of the good topsoil had been washed from the steep hillsides. There was no longer sufficient land for subsistence farming. This coincided with the opening of an outside market by prospectors for timber and coal. Some mountain people had sold their land outright, others their timber, some their mineral rights. For the first time a few people of the hollows had cash to stow away or spend, although for the most part, as Uncle William Creech said, “…the average family of say a round dozen could get by on twenty-five dollars a year.”

Already people were putting away their looms and spinning wheels, buying cloth or ready-made clothes, and hankering after cookstoves and sewing machines. As contacts with the outside world increased, new combined post office and country stores sprang up. People could now buy commercially prepared flour, sugar, and canned goods.

Parents here and there were becoming increasingly aware that their children would need new tools if they were to cope with the new conditions confronting them in the years ahead. More and more they…

[Ink sketch by Mary Rogers of the Pine Mountain valley from above.]
1

…would be facing an unfamiliar, challenging world beyond their narrow valley.

William Creech, an early settler in the Pine Mountain valley, realized the need for a good school. In 1870 he had purchased 700 acres of “wild land” on one of the headwaters of the Kentucky River. His land lay on the north slope of Pine Mountain, which runs like a great wall across the southeast corner of the state of Kentucky. He had cleared the land, built a cabin, and raised a family. Now his sons and daughters were raising their families about him.

The problems created by isolation troubled him. He saw drunkenness in his neighborhood from the abuse of corn liquor. He saw his neighbors too free with their guns. Forces of law and order had little effect in valleys remote from the county seat. An herb doctor, bonesetter, and toothpuller, he knew how many diseases afflicted his people. Often a trained doctor was needed but unavailable. He had tried without success to persuade his neighbors to join him in building a church house where visiting preachers of all faiths could hold their services. Instead he saw young people growing up without “moral training.” He grieved, too, over farming practices—“…all the timber and stuff they are wasting.” He wanted a school not just for reading, writing, and figuring, but one which would teach people how to live and to work with their hands.

Uncle William heard of the settlement school Katherine Pettit had started at Hindman, and liked what he heard. She visited him, and insisted that he and some neighbors should also visit her school. As he…
2

…rode back from that visit he told his neighbors that Hindman was “far better than the most people in this country thinks heaven is.” He offered Miss Pettit some of his land, promising to recruit from the neighborhood contributions of lumber, ox teams, days of labor, and money to help establish the school.

Katherine Pettit, a member of one of Lexington, Kentucky’s, first families, had walked and worked in the mountains since before the turn of the century. She had a deep love for the people, and concern for their needs. At Hindman she had already translated the work of Jane Addams and the urban settlement movement into a rural idiom. Now her thoughts were turning to more isolated, as yet unserved, areas of the mountains.

Traditional schooling was a part of her plan, but she envisaged also a settlement serving a whole community in its economic, health and cultural development. A settlement would not attempt to substitute an outside culture for the indigenous. It would try to strengthen people’s faith in their own heritage, making use of both the mountain environment and their unique traditions as media for learning. It would help people to retain a secure sense of their own worth as human beings.

The new school must have sufficient acreage to supply the bulk of its own needs. It must be less dependent on the slow, unreliable transportation of supplies by ox wagon through almost roadless country.

As a co-worker in her new venture Miss Pettit chose Ethel DeLong, a native of New Jersey, graduate of Smith College, who had joined the Hindman staff. After these two had met with Uncle William and his wife, Aunt Sal, they realized that their ideas meshed closely with those of the Creeches.

Finally Uncle William, by trading some of his land for some owned by a lumber company, secured the tract they wanted. Here there was an opening up of the valley, where the waters of Isaac’s Run and Shell Run, joining to form Greasy Creek, cut their way into the Cumberland Plateau. At that time these creeks served as thoroughfares by which children from many remote branches and hollows could reach the school.

Already in 1913 Pine Mountain Settlement School was incorporated, and a Board of Trustees formed to help guide School policies, oversee the property, and help raise money.
3