As soon as Margaret Nace and her sister, Dorothy, visited Pine Mountain and saw the idyllic settlement school for themselves, they knew they wanted to play a part in its work/study program for Kentucky mountain youth.

Dorothy and Margaret Nace were educated in the Cleveland Public School System and each of them earned a BS in Education at Western Reserve University in Cleveland. After two years of teaching, the sisters were required to work toward a Master’s Degree in education during their summers. They heard about a highly regarded artisan program at Berea (Kentucky) College from a friend and, lured by the promise of adventure in a new place, attended Berea’s hand-loom weaving classes for four weeks in 1942.

The following summer, when they returned for advance classes in teaching weaving, the sisters learned about Pine Mountain Settlement School from their teacher, Harriette Howard, who was a former student at the School, and a classmate, Edna Spinney, originally a PMSS housemother. Hearing that the School was “heaven on earth” was enough for the sisters to want to see the campus for themselves. Dorothy recalls their visit:

School was not in session, but students were there, earning their school fees. Boys did farm work and repairs; girls cleaned and worked in the kitchen or in the small hospital. When beans and tomatoes came in from the fields by the bushel, staff, students, and visitors helped can them into half-gallon jars. We sat under the trees behind the kitchen, peeling tomatoes or ‘busting’ beans and had a great time.

We went home determined that Pine Mountain must be a part of our future. 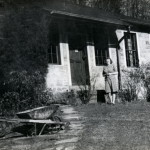 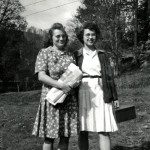 Because Margaret and Dorothy Nace held degrees in primary education they were not qualified to teach Pine Mountain’s high school students. Instead, they applied for work as bookkeeper (Margaret) and secretary (Dorothy) at the School and were accepted. “We were paid $75.00 a month and our room and board. In June of 1944 we left to begin our new life.”

Traveling from Ohio by bus, then on the Louisville and Nashville (L&N) train, they arrived in Harlan County.

We left the train at Putney, a small sawmill town. There John A. Lewis met the train and took mail sacks across the mountain to several post offices. Riding in the cab or in back on the mail sacks was a common way for visitors or staff to get to the school. Even after 24 hours of exhausting travel, we didn’t mind riding in the back, but John A’s conversation was so entertaining it was more fun to ride with him [in the cab of his truck].

The sisters arrived at a time when the rural electric associations had moved through and greatly improved life in the area, but the main road to and from the School was still a logging trail winding over the mountain. A 1996 article about her life, published in The Shopper (Roberts, Wisconsin), records Dorothy’s memories:

…the school was 20 miles from the nearest town with no real road leading to it. But it was supported by a large group of people all the way from Massachusetts to Florida to Kansas City. There was a certain romantic appeal about the area at the time, with a unique quality that people relished, and they were interested in helping out. 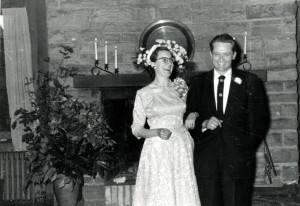 Both sisters met their future husbands during their years at Pine Mountain. Margaret married Robert Starbuck, a Quaker, who was hired in 1950 by the School as a maintenance worker and to work on the Tool House. The Starbuck family lived in the Infirmary building. The Starbuck family left the School in July 1953 for Salem, Ohio. The couple had at least one daughter, Dorothy C. Starbuck.

Dorothy and Margaret E. Nace were the last of four children born to Edwin Allen Nace (1880-1957) and Ida Margaret Roeder (1882-1981). Both parents were from Pennsylvania German families. Margaret was born in Pennsylvania c. 1918. At the time of Dorothy’s birth c. 1920, her father was teaching high school math in McKeesport, Pennsylvania. Beginning in 1920 the family lived near Cleveland, Ohio, where Edwin Nace worked for the Cleveland Public School system and where the children grew up.

On March 31, 2014, Pine Mountain received a donation of historical material related to Pine Mountain from Cecily Perry, one of two daughters of Margaret’s sister. Pine Mountain Settlement School is deeply appreciative of these Pine Mountain materials and the many years that Dorothy and Margaret gave to the School. 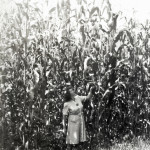 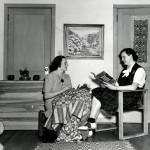