[Note: Letters from PMSS staff in the PMSS Collections are carbon copies, typewritten, unsigned, and meant for the Office files. The original signed copies were sent to the correspondents. The initials at the bottom left of most PMSS letters indicate the writer (along with initials of the secretary). For example, “GM” are the initials for Glyn Morris, Director. Letters from Mary Rockwell Hook are handwritten. The following list of contents is in chronological order and not necessarily in order of the image numbers.]

001a-001d December 27 (no year, evidently 1931). Four-page letter to “Mr. (Glyn) Morris” from “Mary Rockwell Hook” (Mrs. Inghram D. Hook), Kansas City, Mo. [001a] “I was quite delighted with the appreciation of Open House (?) by the writer of the article you sent me. … The house always seems to me a place of enchantment. I love every bit of it. [001b] The men who built it for me called it the ‘Scrap House’ because I used the (?) of the logs left over for Big Log and the slabs we used to (?) to run the saw mill. We cut the rafters & studs & Uncle William (Creech) stood over us to be sure we skinned them. The site was covered with blackberry bushes as tall as the rocks and I cut them out myself. Every bush fought for its life by attacking me in some vulnerable spot.” She praises the two reports Morris sent to the trustees, encouraging him to “file them. They will be an invaluable record [001c-d] for the school….” She enjoyed reading about the Christmas program in the (Laurel House I) dining room and will use it to influence a prospective donor; mentions Katharine French’s pictures. She remembers the school singing folk songs after supper on certain evenings and comments on the usefulness of that tradition.

002 January 12, 1932. To “Mrs. Hook” from GM (Glyn Morris), DIrector, thanking Hook for her December 27th letter. The author of the article (about Open House) that he sent Hook was Bruce Crawford, editor of three small newspapers in the Norton, VA, area. “He knows Sherwood Anderson very well and says that Sherwood Anderson would love to spend some time at Pine Mountain.” The pictures that he received from Miss French “have come out very nicely….” Morris asks if she can find someone to donate oranges to the Infirmary. The School doesn’t have money to hire the young man Morris interviewed who was recommended by President Hutchins (of Berea College).

003 March 9, 1932. To “Mrs. Hook” from GM (Morris), enclosing a draft of the April Letter for her suggestions. Tells about photos he will be including in the Letter.

007 May 12, 1932. To “Mrs. Hook” from GM (Morris), who must cancel her stationery order. ”We cannot seem to get the kind of impression for which we feel like charging one dollar. Our press is a small hand one and does not seem true enough to print block type.”

009a-009b December 10, (no year, evidently 1932). Two-page letter to “Mr. Morris” from “Mary Rockwell Hook,” who requests that the four hearth brooms are paid for with the enclosed check. She suggests that the check can also be used to buy fresh or dried fruit or nuts. “The diet has to contain so much starch, there is real need of citrus fruits.” She is sorry to hear that Alec Day died.

008 December 15, 1932. To “Mrs. Hook” from Glyn Morris, Director, thanking her for her December 10th letter and $50 check. The School will use it for the hearth brooms and for oranges, as she suggested. “We find that we can buy them wholesale very cheaply at the present time, and they serve as excellent dessert.” 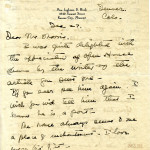 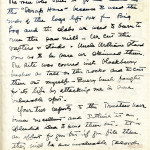 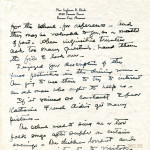 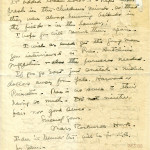 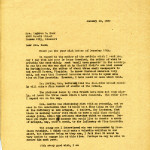 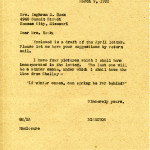 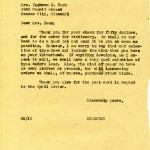 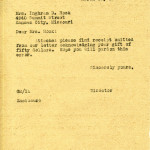 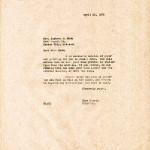 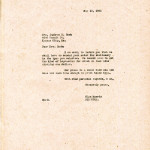 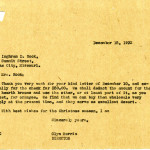 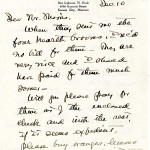 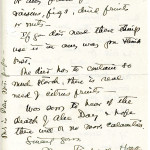