[Note: Letters from PMSS staff in the PMSS Collections are carbon copies, typewritten, unsigned, and meant for the Office files. The original signed copies were sent to the correspondents. The following list of contents is in chronological order and not necessarily in the order of the image numbers.]

001 August 15, 1940. To Mr. Jess Cornett, Pine Mountain, KY, from [unsigned; “Dictated, but not edited.”], requesting “a list of all the names of those students who come to your store for a whole week, and the number of times each comes.”

002 December 6, 1940. To Jess Cornett from [unsigned], notifying him of a change in the nightwatchman’s routine: “In order to provide maximum protection for the school, I am going to ask you to return to making seven rounds per night with as much regularity as possible.”  [RESTRICTED]

007 August 2, 1942. To Mr. and Mrs. Jess Cornett from [unsigned, likely William D. Webb], Acting Director, expressing appreciation for “the help you have both given the school during the past months. It is good to know that we have neighbors like you working on the staff and furthering the interests of Pine Mountain.”

006 December 19, 1942. To Mrs. Jess Cornett from [unsigned – handwritten notation indicates “Mrs. Webb.”], stating that Mrs. Cornett is expected for laundry work as usual. No girl will be furnished for the ironing. So Mrs. Cornett will iron up to sixty pieces.

“mentions a ruling by the State’s Attorney General, Mr. Eldon Dummit, …that Kentucky law forbids the employment of a sheriff’s deputy by a private company and that violations subject the employer to a fine. … [A]lso that if the governor were requested to do so he might appoint guards under the state’s peace officers act.”

Benjamin asks if Mr. James Cawood, the county sheriff, could deputize Mr. Jess Cornett of Pine Mountain, Kentucky. …We can recommend Mr. Cornett as he has served this school well over a number of years. He is a member of the local Masonic lodge and has the respect of his neighbors and of workers at the school.”

013 August 17, 1950. To Mrs. Sally Cornett, Pine Mountain, KY, from Burton Rogers, Director, asking if she would return to work at PMSS. “I hope you and the children have had a good summer. Jess has been doing a grand job here and many have mentioned to me how well the campus has looked this summer.” 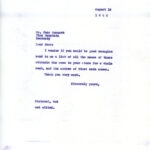 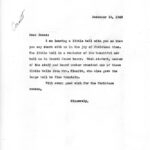 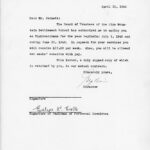 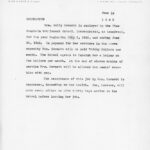 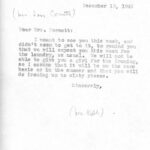 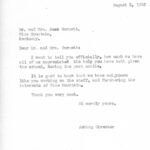 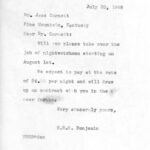 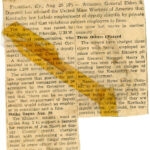 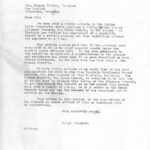 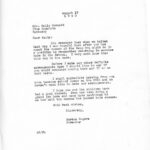