The last two days I have spent mostly in tramping over neighboring mountains and creeks and branches I am making a chart of all the families in our area, names of children, ages, etc., as a sort of preparation for our extension program next year. Barby [Barbara Faulkner] and I went out to Big Laurel Wednesday night in order to get an early start on Thursday morning. 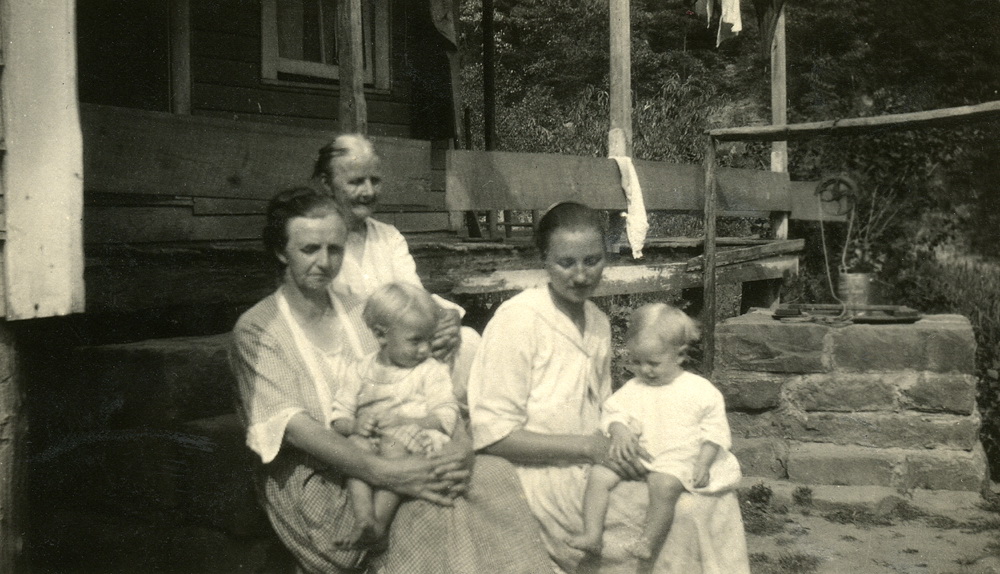 When we got there Merle told us that my little namesake, Alice Lexine Blevins, was dying. They had taken her on a twenty-mile trip to Cutshin, and she’d got a heavy cold. Well, I was heartsick and in a little while Mrs. Baird [Lexine Baird} came in to say that the baby was dead. Of course, I couldn’t go out then for it was early midnight and pouring rain but first thing next morning we walked out to their home. The father is Jim Blevins and the mother Manilla [Boggs], a sister to my Nancy Boggs who sings the ballads. As we went down the hill we saw the man digging the little grave in the cemetery, just below the Medical Settlement [at Big Laurel], and a big crowd collected around.

Jesse Fields, the preacher, was already there, studying over his sermon and leafing through the songbook. Down at the head of the creek, we could hear hammering and then when we got up to Hep Turner‘s we saw John in the backyard nailing up the little coffin. He was making it out of a soap box. When we got up to Stacy Ellen’s [Stacy Ellen Boggs]  place (she is Manilla’s mother) where they had taken the baby, we found all the women in one room and the men in the other, and everyone weeping, with all the children standing around wide-eyed. I never saw such misery. The women’s room was [reft?] of furniture except for the two beds and the chairs. Manilla was all slumped down in one and leaning over the foot of the bed crying. He hair was down. Jim sat with his head in his hands. And poor Nancy looked as though she’d cried for a month I couldn’t believe they were the same family we’d visited the first night I went up to see Alice Lexine. Then Manilla had been all smiles and talk and Nancy so pretty and blooming. There had been two men playing on guitars and singing, and everybody was so wonderfully happy that this all seemed more dreadful in contrast.

The little baby was wrapped in a blanket, waiting for the coffin, and of course, we were expected to look at it. I  always spoke of it as my baby, and they all did. It was so pretty and white. Stacy Ellen told me it was going to wear the little jacket I had given her, and she wanted Mrs. Baird to fix a dress. She said she sent the men folks to Will Turner‘s store for goods, but “Men folks don’t know how to do,” she said, “and a body wants to put their dead away in fittin’ clothes,” (Mrs. Baird, in the end, made the little dress out of a sheer skrim window curtain she found in a trunk at the settlement.)

We left at this point and returned after the meeting was over, but not too late to see them bring paralyzed Louis. Six men heaved the bed to their shoulders, his wife walked behind lugging the pink comforter and Louis, holding the poppy upright and the smoking pipe in the other, started off on the eight-mile ride home.