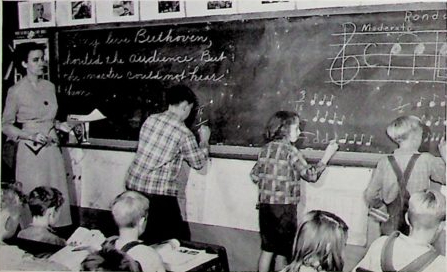 Golda Pensol was born on January 4, 1925, in Rockcastle County, Kentucky. She was the first of four children born to Andrew D. Pensol and Sadie Mae (Mink) Pensol. As of the 1940 U.S. Census, her father was a stonemason with the Works Progress Administration (WPA) program.

Golda Pensol attended Annville (Kentucky) Institute High School, then Lee’s Junior College in Hazard, Kentucky, and Eastern Kentucky University (EKU) in Richmond. She graduated from EKU with a Bachelor of Science in Education. She continued at EKU, earning a Master of Art and a Rank I in School Administration. She also completed post-graduate studies at Columbia University in New York City. From c. 1943 until 1949, Golda served as a teacher in one-room schools in Rockcastle County, Kentucky, and during that time she worked diligently to improve them.

Golda was sent to PMSS in October 1949 by Berea College, which was supplying temporary assistant teachers to ease overcrowding in schools, a problem at PMSS as well as across the nation due to rapid population growth. After her experience with one-room schools, Golda greatly appreciated the progressive approach to education that Pine Mountain Settlement School (PMSS) was developing.

Golda embraced PMSS’s methods of teaching, integrating music with other units of study at the School. She nurtured her third through fifth grade students’ appreciation of music through records, visiting speakers, field trips, pictures, posters, projects, and a growing library, as well as a puppet show and an operetta presented by the students. The November 1950 issue of Notes from the Pine Mountain Settlement School, describes Golda’s teaching:

The fourth and fifth graders of Miss Pensol’s class have been head-over-heels in music since school began. Miss Pensol planned a music appreciation unit which involved everything else — reading, English, spelling, and even arithmetic. As a result of daily listening sessions the children can recognize many different instruments and a variety of compositions. One of the staff children has a subscription to the Young People’s Record Club and these records are used extensively along with records from the school’s symphonic record library — a Carnegie grant.

The class made a trip over the mountain to Harlan in a school bus to visit the music store. There they saw and heard many instruments. …

Preparation of a simple dramatic version of “Hansel and Gretel” has absorbed a good deal of time. After this performance the class wants to give a puppet show based on ‘Peter and the Wolf.’ They are looking forward to the visit of the Lynch High School band which has promised to make the 60-mile round trip to give a concert for the whole school. …

Golda also wrote an undated narrative titled, “Music Appreciation by grades 4-5b. Golda D. Pensol, Teacher,” in which she provides “practices that provide of creativeness and appreciation.” As examples of those practices she describes taking the students to the Cumberland Valley Music Store, a “Peter and the Wolf” puppet show presented by the students at the School’s Christmas party, and the positive effects of playing music as the students worked. She writes about appreciating music in nature:

The class went on hikes and listened for music in nature as the gurgle of a brook, the wind in the trees, a frog in the marshes, and a bird just outside the window. They saw rhythm and harmony in their environment as they went down to the creek and painted to the tune of nature’s symphony.

In an outline titled “Integrated,” Golda lists the ways in which music can be integrated with other subjects under the headings for Reading, Writing, Arithmetic, Language and Spelling, Geography, History, Art, Safety, Physical Education, Dramatics. Under the heading for “Records,” she lists the long-playing records on hand. Under “Guest Assistants,” she lists guest performers, such as a singer from India, players of recorders, the Lynch Band concert, and Richard Chase, “who played the record, a Swiss music box and taught singing games.”

Golda Pensol Baker opened the eyes of her students to musical instruments and the manner in which they were played. And she opened their ears to musical sounds that they may have heard for the first time. Ultimately, she provided her students with an appreciation of music that would enrich their perspective of the world for the rest of their lives.

Golda left Pine Mountain in 1953, having accepted a teaching position with the Barren County and city school systems. She retired from Barren County Schools as Supervisor of Instruction. She had also served as principal of Red Cross Elementary School in Glasgow, Kentucky. After her retirement, Golda taught as an adjunct instructor for Western Kentucky University’s Glasgow campus and Lindsay Wilson College in Columbia, Kentucky.

According to her obituary, Golda Pensol Baker died at the age of 93 on February 8, 2018, in Glasgow. She was buried in the Ted Mink Family Cemetery in the Sandhill Community of Rockcastle County.