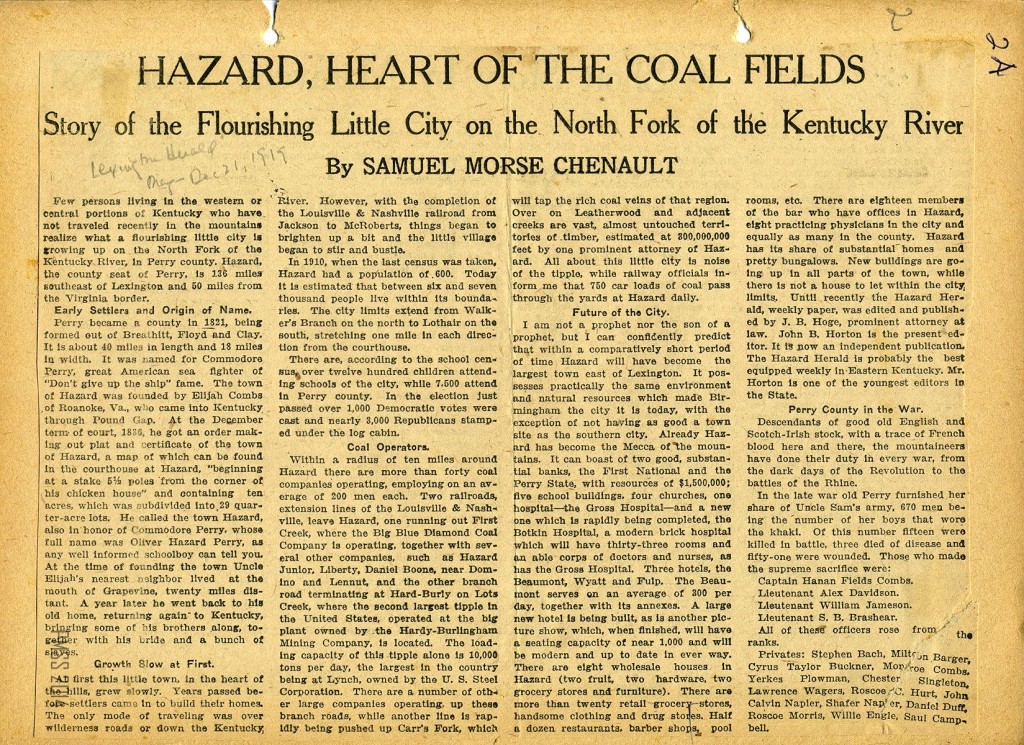 HAZARD, HEART OF THE COAL FIELDS
Story of the Flourishing Little City on the North Fork of the Kentucky River

Few persons living in the western or central portions of Kentucky who have not traveled recently in the mountains realize what a flourishing little city is growing up on the North Fork of the Kentucky River, in Perry County. Hazard, the county seat of Perry, is 1.36 miles southeast of Lexington and 50 miles from the Virginia border.

Early Settlers and Origin of Name.
Perry became a county in 1821, being formed out of Breathitt, Floyd and Clay, It is about 40 miles in length and 18 miles In width. It was named for Commodore Perry, great American sea fighter of “Don’t give up the ship” fame.

The town of Hazard was founded by Elijah Combs of Roanoke, Va., who came into Kentucky through Pound Gap. At the December term of court, 1836, he got an order making out plat and certificate of the town of Hazard, a map of which can be found In the courthouse at Hazard, “beginning at a stake 5% poles from the corner of his chicken house” and containing ten acres, which was subdivided into 29 quarter-acre lots. He called the town Hazard, also in honor of Commodore Perry, whose full name was Oliver Hazard Perry, as any well-informed schoolboy can tell you. At the time of founding the town Uncle Elijah’s nearest neighbor lived at the mouth of Grapevine, twenty miles distant.

A year later he went back to his old home, returning again to Kentucky, bringing some of his brothers along, together with his bride and a bunch of slaves.

Growth Slow at First.
At first this little town, in the heart of the hills, grew slowly. Years passed before settlers came in to build their homes. The only mode of traveling was over wilderness roads or down the Kentucky,…

…River. However, with the completion of the Louisville & Nashville railroad from Jackson to McRoberts, things began to brighten up a bit and the little village began to stir and bustle.

In 1910, when the last census was taken, Hazard had a population of 600. Today It is estimated that between six and seven thousand people live within its boundaries. The city limits extend from Walker’s Branch on the north to Lothair on the south, stretching one mile in each direction from the courthouse.

There are, according to the school census, over twelve hundred children attending schools of the city, while 7.500 attend In Perry County. In the election just passed, over 1,000 Democratic votes were cast and nearly 3,000 Republicans stamped under the log cabin.

Coal Operators.
Within a radius of ten miles around Hazard there are more than forty coal companies operating, employing on an average of 200 men each. Two railroads, extension lines of the Louisville & Nashville, leave Hazard, one running out First Creek, where the Big Blue Diamond Coal Company is operating, together with several other companies, such as Hazard Junior, Liberty, Daniel Boone, near Domino and Lennut, and the other branch road terminating at Hard-Burly on Lots Creek, where the second largest tipple In the United States, operated at the big plant owned by the Hardy-Burlingham Mining Company, is located. The loading capacity of this tipple alone is 10,000 tons per day, the largest in the country being at Lynch, owned by the U.S. Steel Corporation. There are a number of other large companies operating up these branch roads, while another line is rapidly being pushed up Carr’s Fork, which…

…will tap the rich coal veins of that region. Over on Leatherwood and adjacent creeks are vast, almost untouched territories of timber, estimated at 300,000,000 feet by one prominent attorney of Hazard. All about this little city is noise of the tipple, while railway officials inform me that 750 carloads of coal pass through the yards at Hazard daily.

Future of the City.
I am not a prophet nor the son of a prophet, but I can confidently predict that within a comparatively short period of time Hazard will have become the largest town east of Lexington. It possesses practically the same environment and natural resources which made Birmingham the city it is today, with the exception of not having as good a town site as the southern city. Already Hazard has become the Mecca of the mountains. It can boast of two good, substantial banks, the First National and the Perry State, with resources of $1,500,000; flve school buildings, four churches, one hospital — the Gross Hospital — and a new one which is rapidly being completed, the Botkin Hospital, a modern brick hospital which will have thirty-three rooms and an able corps of doctors and nurses, as has the Gross Hospital.

Three hotels, the Beaumont, Wyatt and Fulp. The Beaumont serves on an average of 300 per day, together with its annexes. A large new hotel is being built, as is another picture show, which, when finished, will have a seating capacity of near 1,000 and will be modern and up-to-date in every way.

…rooms, etc. There are eighteen members of the bar who have offices in Hazard, eight practicing physicians in the city and equally as many in the county. Hazard has its share of substantial homes and pretty bungalows. New buildings are going up in all parts of the town, while there is not a house to let within the city limits.

Until recently the Hazard Herald, weekly paper, was edited and published by J. B. Hoge, prominent attorney at law. John B. Horton is the present editor. It is now an independent publication, The Hazard Herald is probably the best equipped weekly in Eastern Kentucky. Mr. Horton is one of the youngest editors in the State.

Perry County in the War.
Descendants of good old English and Scotch-Irish stock, with a trace of French blood here and there, the mountaineers have done their duty in every war, from the dark days of the Revolution to the battles of the Rhine.

In the late war [WWI] old Perry furnished her share of Uncle Sam’s army, 670 men being the number of her boys that wore the khaki. Of this number fifteen were killed in battle, three died of disease and fifty-one were wounded. Those who made the supreme sacrifice were: