The grandson of Loyd Turner tells the story of slick horse and mule trading by Loyd and Ben Napier with Mr. Chapel. The narrative covers the following subjects: 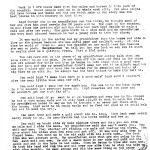 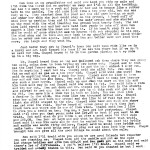 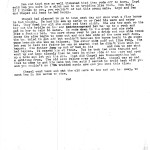 NOTE: The text has been slightly edited for readability.

Back in 1879 there were very few mules and horses in this part of the country. Most people used ox to do their work with. But some people did have horses and mules and the one which make up our story was the best horse in this country at that time.

Loyd Turner who is my grandfather own the horse. He thought much of her. She give him good service for 20 years and ha… the name in the country. So now since she getting old and has done her part Loyd decide to raise a colt and give her rest. She gave birth to a nice colt and my grandfather was very much pleased because he had a young mule to take her place.

It was early in the spring and my grandfather turn the horse out side to live as she please because she was alful poor and couldn’t work. At this time he would of given her away but decided no one would have her because she was so poor. To tell you how she look we can cut it short by saying poor as a quilting frame. That alful poor.

The old mare out by the store of my grandfather eating salt, when Ben come riding up on his mule. He got down off his mule and went in the store and sit around for while and then he begun to talk about what a good mare she had been and why my grandfather didn’t swap her off if he didn’t want her and now I might add that what Ben is noted for is swapping and being a big blow to go with it. He always has the best things to hear him tell it.

Ben said, Loyd “I swap that mare to a good mule.” Loyd said, I couldn’t give her away little lone swap her off.

Ben said, Loyd I swap her for anything. She use to be the best horse in this country and everyone knows it. Loyd remark she too poor and we couldn’t get her that far off.

Ben said, Loyd if you want to, we go tomorrow and swap her to Mr. Chapel. He has a good young mule and it only take $15.00 to boot to make the trade. My grandfather hated to say no but he though they never get there with the horse. Loyd said, he be ready early and he feed her good so it would help her out to make the trip.

Ben went home and made a quill about six in. long. Come back next morning early ready to go. My grandfather had the horse saddle and [?] ready.

Ben said, we both ride my mule almost there and then you can ride my mule and i ride the mare. My grandfather said, she can’t carry you, Ben, wait and see. They started off riding one mule and loading the horse. They gone about ten miles when Ben stop and got off. It was only mile down to Chapel home. Ben went up to the old mare with his knife open. She look like she was almost gone. My grandfather said, what are going to do. Ben said, wait and see. He cut a small hole in her side and pull out his quill and put in the hole he had made. Then he begun to blow air into her. He took his hand and rub the air all over one side then he stop the hole up with pine rausin. He went around and did the same thing on the other side.

Ben turn to Mr. Turner and said, what do you think now? I believe we can swap. Loyd, eyes as big as a half fried egg, said, that the best looking mare I ever saw. And where did you ever see or hear about [?] like that. Ben said, I just thought of it myself.

[page 2, image 07013]
Ben look at my grandfather and said, now Loyd you ride my mule and I’ll ride the horse and we pertend we swap and I’ll do all the trading. Ben led the mare up to a rock and jump on her and he bounce like a rubber ball in the saddle. The old mare look like a two year old, but she was very weak. They started down the road and the old mare having so much air under her skin she just could stay on the ground. A hard puff of wind come up meeting them and it turn the mare around and she started up the road with the wind touching the ground ’bout twenty feet. The old mare laid straight out and her ears laid back ready to take off when Ben caught a limb beside the road and stop it. If he hadn’t stop it as he did he would of gone straight to heaven with out stopping on his way. The wind stop and he turn and went back to my grandfather who stood thinking he never see Ben again. Loyd said, Ben you better walk and lead that mare. Ben laugh and they went on.

Just before they got to Chapel’s home Ben said, less ride like we in a hurry and not look toward his home, if we see him there, but if we don’t we call for him. Chapel happen to be in his garden plowing as they rode up in a big way.

Mr. Chapel heard them coming and hollowed, ask them where they was going. Ben said, going down to town trying my new horse out. Chapel ask if that was the Loyd Turner mare. Ben said, it is and the best animal I ever own. She do anything I want her to. Chapel said, she alful fat. Ben said, fat as mud and as gay as a two year old. Chapel said, will she work? Ben said, do anything. That why I swap for her. Chapel said, he like to have her and ask Ben how he swap. Ben said, I don’t want to swap her because she such a good horse. Chapel walk up and slap the mare on the hip and his hand went way in and Chapel said, she sure is fat. Ben said, take a ride and try her out. Ben got down and Mr. Chapel put his foot in the sturrip and started to get up. Ben said, here get up on this rock and get up. So he did. Ben gave him a limb but it took no limb. She was gone like a feather in the wind. She rode like ten thousand dollar car. Chapel stop her quick and turn her around and she like to of fell but was so light she still stayed in the air. Chapel come back and said, she sure can get over the road. You’ve heard of hares going so fast they just touch here and there, she is one of them kind.

Chapel said, Ben I like to give you a trade on her. No, no, I just got her yesterday. Chapel said, I’ll give you that young mule and $25.00 to boot if you want to trade. Ben said, what do you think I am, give a good mare for that mule and $25.00. Ben look at Loyd and ask what he thought about that trade. Loyd said, it was his mare and do what he wanted to. Ben said, his bridle and saddle was worth fifty dollars. Chapel said he would have bridle and saddle back. Ben said, bring your old plug out and less look him over. Chapel brought him out, give all the good things he could about the mule.

Ben said, I’ll trade with you since we are good friends but remember you are cheating me. Chapel took off the saddle and put on the mule and change bridles and give Ben $25.00 and Ben got on his mule and said, there’s a lot of difference. I don’t believe I’ll trade. Chapel said, we traded and nobody trades in this. Ben said, OK you cheated me but I won’t trade again with you.

[page 3, image 07014]
Ben and Loyd was so well tickled that they rode off in [a] hurry. Loyd said, Ben you sure is a slick man to do trading like that. Ben said, If I listen to you, you wouldn’t of had this young mule. Loyd and Ben and Chapel all went to bed happy.

Chapel had planned to go to town next day and show what a fine horse he had bought. He had his son up early to go feed his mare and water her. They feed her all she could eat that night. She ate too much so the boy put the bridle on her and led her up to a rock and got on her to take to water. He rode down to the creek and she rode like a feather bed. The mare stoop over to get a drink and one side broke loose, the air begin to come out and one whole side of the mare went down. The boy tried to get off but couldn’t because the horse begin to go sideways because she was on balance. The other side puff out like [a] frog. The boy ran to tell his father he was so scared that he didn’t know what had happen. His father jump up out of bed in his [….?] and run to see what had happen. It scared him at first. But he took two more thoughts and went up and look closely, then he went on other side of the mare and open up a hole and let out the air. What did Chapel see then — nothing but a quilting frame. The old mare fell over and died. Chapel was so mad that he come to get his mule, but Ben said, I wanted to trade back with you and you wouldn’t, so I’ve traded again now and you lost this time.

Chapel went back and put the old mare in [a] box and put her away, to meet Ben in the world to come.