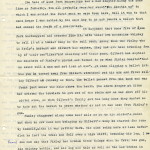 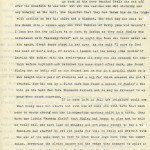 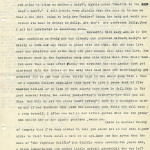 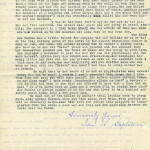 The tale of Line Fork happenings has a new chapter along the same line as formerly. You all probably remember about “the shootin’ up” to which I was called the first week we were down here, well it was to that same house I was called by the same boy to go and remove a bullet that had caused the death of a son-in-law.

It happened that some five of Line Fork bootleggers had crossed Pine Mt. with their own moonshine whiskey to sell it at a lumber camp on the rail road. Among them was Finley who is Neely’s husband and Gilbert his nephew. They had all been drinking freely of their own “liker” and shooting off their guns. Gilbert had emptied the chambers of Finley’s pistol and turned to go when Finley boasted “that he could kill a man and not look at him”. At once slipping a bullet into his gun he turned away from Gilbert stretched out his arm and fired killing Gilbert as quickly as that. The bullet passed from the back and was found just under the skin above the heart. The store keeper at Hiram had ordered the brawlers to get out of the store and he had shot off his pistol also, so when Gilbert’s family got the boy home they wanted me to take out the bullet to prove whether or not it had been from Finley’s gun.

Finley staggered along some half mile or so to his sister’s cabin but when he saw some men bringing up Gilbert’s body he started for home by himself, altho it was getting dark. His mind being more or less befud­dled he lost the trail and fell over a high cliff, breaking his leg. I heard one man say that Finley had broken three things when he fell: his gun, his whiskey bottle, and his leg and this as well as the law broken in several places before. Old grandpap Hall remarked very solemnly “a pity he hadn’t broke his neck”. That night there was a heavy fall of snow that covered Finley where he fell but the next morning he was found by a deputy sheriff who was searching for him and finding his leg broken took Mr. Finley down on the first train to Harlan hospital. This is the county seat so the jail is located there.

As soon as the news reached Neely she set off over the mountain to see him but all she saw was his wet clothing and cap hanging on the wall. She reported that they had taken him on the train with nothing on but his shirt and a blanket. The next day she came to the Cabin with a dozen eggs and four bundles of fatty pine and wouldn’t I loan her the two dollars to go down to Harlan as they said Finley was threatened with “neumony-fever” and he might die then she would never see him again. Great tears stood in her eyes as she said “I sure do feel the need of God’s help.” Of course I loaned her the money — who wouldn’t?

Leaving the babies with the twelve-year old step son she crossed the moun­tain before daylight and returned the same night after dark. She found Finley not so badly off as she feared but he was in a pitiful state so she bought him a pair of overalls and a cap for which, somehow she got trusted. Now his son by a first wife has found a cousin of Finley’s who will go his bail for five thousand dollars and he may be released to ap­pear when court convenes.

If he were left in jail the neighbors would see that Neely does not starve but with him at home she will have that much more to worry about and she is expecting another child in a month. They have one little “bottom field” that Finley had begun to plow and he said
he would sell one more load of whiskey and get money enough to buy a wire fence. He had started to get out posts for this so Neely and Everett with the aid of the mule went to work to draw these logs down from the mountains. Borrowing the sledge hammer and the wedge they managed to split it into posts and rails and have actually made the fence secure on one side of the field. They are still at work at it as well as doing odd jobs for their neighbors who pay her in milk or potatoes or fodder in exchange for using the mule.

It seems she must have been preparing the children for the coming event by telling them that the doctor was going to bring them a baby and I was quite astonished to hear little Mary call out to me as I was passing “Are you going to bring my mudder a baby?”. Myrtle asked “what’ll be the baby’s name?” I told Mrytle very plainly when she came up to see me that I was just going to help her “mudder” bring the baby and would much rather its name be Petter [sic] or Polly. She tho’t [sic] she preferred Polly. Then I got her interested in something else.

Gilbert’s wife Mary Ann is in the same condition as Neely and has already six children without Neely’s ability to work now any field to plant were she able. But she does live near her relatives and altho they are poor enough will help her live. Two brothers work in the lumbering camp some nine miles walk from their home. Not more than a week after Finley was arrested his son Archie (not yet nineteen), with the father of the baby that died, went off boot-legging, got arrested for it and were given thirty days in the chain gang with a fine of a hundred dollars each. Also they have to give a peace bond of five hundred dollars or in lieu of such, ninety days more in jail. This is for good behavior during the coming year. Irving’s father-in-law will pay his fine but will he get the peace bond? Irving’s wife is a courageous work­er and if her brothers will plow the mountain side field she will make in a crop herself. I often see her in her little garden with the two young-uns beside her as she plants potatoes, beans, [etc].

There is another family of tragedy that I’ve been minded to tell you about but it had been impossible to visit there until a week or so ago. Some one has given them the name of “The Fighting Griffis”. Mrs Griffis — some seventy-two years old, a blind hunch-backed son and the little natural grandchild who was left on the door-step some seven years ago, form the family now. She came to this particular hollow some thirty or forty years ago with her husband after they had been wandering about for some years and had quite a sizable family of half grown and smaller children. Mr Griffis must have been a terrible man – cruel to the last degree with man and beast. He killed one child by hitting it with a whiffle tree and then said the mule did it. The mule was vicious and had killed two of the children. When two of the boys were fifteen and sixteen they shot their father in the head thru a chink of the logs one morning when he was still in bed. That was twenty years ago and she has carried on alone ever since. One son killed the other and disappeared and has never been heard of since. Another married the daughter of a neighbor and after living with her a few years left her for another neighbor’s wife who eventually killed him and went back to her own husband.

I was in her home just a day or two ago to see her. She has five children. The oldest nine years old and going to school stea­dily. The youngest is a tiny baby. Every one was afraid of this man whom she had killed so no one mourned his loss when he was done for.

The blind son Norman has a little talent for singing the old ballads so, as we sat on the tiny rotting porch of the hovel in the almost bottomless chairs, he sang us some old tunes, his mother helping him in rather a strong voice. She took me to see her “tater” patch and pointed out the orchard they had themselves planted and the field in which she was going to grow corn.

She employed a neighbor to plow for her but she did practically all the work herself. Little Mary was bright and interesting. She displayed her mangy little dog Fido and the pig Allison as well as the speckled hens that came to her call. She was very dirty but Mrs Griffis said she had been so busy with the “taters” she hadn’t had time to strip [bathe] either her or Norman.

He said that he had heard of us and as Mr. Stapleton sang several songs for him he said “I reckon I can’t remember them songs. But I like them fine and hope you will come again”. His mother allows chewing tobacco and Mary says “I take candy. Grandmother allows me that.” A brother of Mrs Griffis had been to see them and offered to give them a home but she said “No I’ve lived here so long now I reckon I’ll be buried here also”. Her father is always spoken of as the man who lived to be a hundred and thirty years, dying only a few years ago.

We came out of the hollow by another trail leading down to Stony Fork. Many Spring flowers were out — the blood root being very profuse as well as unusually large. Some wild iris and yellow lady slippers we trans­planted from the woods a year ago and they are now appearing between the rocks near the Cabin.