STAPLETON REPORT May 1930
“Here we are again after a delightful two months vacation. I called it ‘The Progress of Darby and Joan’……”

GALLERY: Stapleton Report May 1930 “Here we are again…” 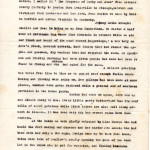 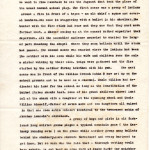 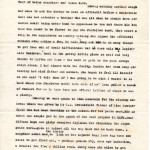 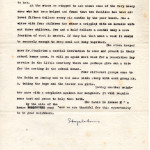 TRANSCRIPTION: Stapleton Report May 1930 “Here we are again…”

NEIGHBORING ON LINEFORK
May 1930

Here we are again after a delightful two months’ vacation. I called it “The Progress of Darby and Joan” from Letcher County Kentucky to Boston thru Louisville to Chicago, Detroit and Cleveland then Rochester and New York. From Boston we came by boat to Norfolk and across Virginia to Kentucky.

Johnny Lewis brought Swallow and Bess to bring us up from Cumberland. We rested a half hour at Hurricane Gap where Pine Mountain is crossed while we ate our lunch and heard of the most recent happenings, – a new baby on Jake’s Creek, several arrests, hard frosts that had ruined the apples and peaches, dry weather that had retarded the corn. Si Sparkman and Bradley Browning had been given parole but such had been refused to Finley and others who had asked for the same.

A welcome greeting was waved from time to time as we passed near enough fields where hoeing and plowing were going on. New palings had been made at some places, tumbled down gates replaced while a general air of neatness prevailed in the house yards.

Spring had come on apace, corn was up and almost ready to hoe. Every little sandy bottom-land has its neat hills of sweet potatoes while Irish “taters” are also well along almost in blossom. It has been very dry but recent rains have done wonders.

At the Cabin we were gladly welcomed by Miss [May D.] George who had held the fort during our absence and her sister Mrs. [Sarah Marcia] Loomis who had been with her only a few days. Evelyn came up to take Bess home. Tales were told of Swallow’s crafty opening the gate of the wood lot in which she is put for exercise, and finding luscious green grass in the yard she refused to go in the stable. Rosa Belle had to go for Carter to help get her in so she would be ready for the trip to Cumberland. This she did with her usual willingness and Mr. Stapleton rewarded her by letting her graze around for an hour at the end of the bridle, a treat permitted her every day.

Saturday we went to Pine Mountain to see the Pageant that took the place of the usual annual school play. The first scene was a group of Indians around a fire in front of a tepee – an old chief, a squaw and several hunters. One came in staggering with a bullet in his shoulder. The hunter with the fire stick had come and they saw that they must move further West. A shower coming up at the moment rather expedited their departure. All the assembled audience scurried to shelter, the larger part reaching the chapel where they sang ballads until the storm had passed. The second scene was enacted where the Indians had been [line missing]. The settler with his cows while his wife and children rode the mule a sister walking by their side. Twigs were gathered and the fire started by the settler firing into them with his gun. The next scene was in front of the William Creech Cabin (now set up on the school grounds and to be used as a museum). Uncle William had dedicated his land for the school “as long as the Constitution of the United States should last.” Some of his grandchildren showed Aunt Sal at the churn with a daughter at the spinning wheel and Uncle William himself, – father of seven sons and two daughters all raised in that one room cabin – almost identical to the treasured cabin of Abraham Lincoln’s childhood.

A group of boys and girls in old fashioned long skirted gowns played a typical mountain game (the Kentucky running sets) on the grass while another group sang ballads behind the shrubbery. More showers threatened and every [one] hastened to get home. But so warm was the rain that a thorough wetting would harm nobody. We got back on Line Fork at dusky dark. Our neighbor at the head of the Fork has about finished a new house of four rooms. It is such a pretty spot commanding a lovely view up and down the narrow valley – seeded to grass while the steep mountain side is in corn. The owner was serving a term for having a moonshine still but a chance coming to escape he took it and is now at home but cannot be very happy as there is always the fear of being surprised and taken back.

Sunday morning another neighbor came to ask the doctor to make an affidavit before a magistrate that she had attended a brother who was ill when he should have attended court being under bond to appear. As he was not there his brother was about to be forced to pay the forfeited bond. That meant a trip to the magistrate on Monday morning who signed the affidavit without even asking a fee. He said, “They ask me to do many things to get them out of their difficulties but I do only my legitimate business.” Back to the pretty little place so neat and tidy thanks to Martha and Rosa – the walk or path to the gate always swept clean. I had dinner with the family. Martha had been away attending her sick father and mother. She began to feel ill herself so she said, “I told them if I was going to be sick I wanted to be back where Mrs. Stapleton could take care of me.” Rosa pulled a bunch of rhubarb for me to take home and offered lettuce of which we had aplenty.

Tuesday we went again to Pine Mountain for the closing address which was given by Mr [James]. S. Crutchfield, father of Miss [Harriet] Crutchfield who has been teaching in the school for two years past. His address was simple yet to the point of the real purpose in life. Some fifteen boys and girls received diplomas for finishing the eight (sic) grade work. Again it rained all the way back but no harm done. A neighbor asked the doctor to look at her injured leg. Each day someone comes to get first aid, – perhaps poison ivy, some eye infection, a bruised toe from a falling rock. Buddy came six miles to get some advice about his failing digestion. Mary Ann and her little boy to beg some help.

Another day we hired Bess and Mr. S joined in making several calls on Leatherwood. “Mis Gross” an elderly lady has been an invalid for two years and dearly appreciates a visit and some reading material tho she cannot read herself. It helps to bear the pain and to pass the time to have the granddaughter read to her.

At the store we stopped to ask about some of the very needy ones who had been helped and found that two families had been allowed fifteen dollars every six months by the poor board. One a widow with four children, the other a cripple with an invalid wife and three children. Two and a half dollars a month! Only a mere fraction of what is needed. If they had that much a week it would be scarcely enough to keep soul and body together.

The store keeper gave Mr. Stapleton a cordial invitation to come and preach in their school house soon. We will go again next week for a Decoration Day service in the little cemetery there and perhaps give out a date for the meeting in the school house.

Four different groups came to the Cabin on Sunday and we had some Bible Study with each group, Mr S. taking the boys and the doctor the girls.

To-day another neighbor came with a complaint against her neighbor. It will require some tact and grace to help them both.

The Cabin is indeed “a house by the side of the road” and we are thankful for this opportunity to be good neighbors.

The House by the Side of the Road

There are hermit
souls that live withdrawn
In the peace of their self-content;
There are souls, like stars, that dwell apart,
In a fellowless firmament;
There are pioneer souls that blaze their paths
Where highways never ran;-
But let me live by the side of the road
And be a friend to man.

I know there are brook-gladdened
meadows ahead
And mountains of wearisome height;
That the road passes on through the long afternoon
And stretches away to the night.
But still I rejoice when the travelers rejoice,
And weep with the strangers that moan,
Nor live in my house by the side of the road
Like a man who dwells alone.