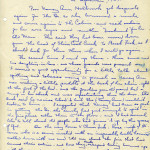 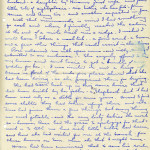 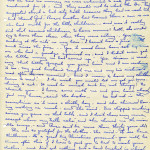 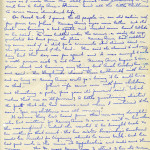 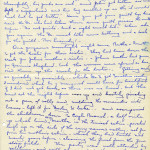 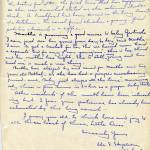 TRANSCRIPTION courtesy of Gretchen Hasch, great-granddaughter of the Stapletons:

From Line Fork Settlement
In September 1927.

Poor Nancy Ann Holbrook got desperate again for the Dr so she borrowed a mule and came again to the Cabin – and rec’d medicine for her sore eyes and another “Treatment” for her Old Man. She said they had been moved down from the head of Stone Coal Creek to Beech Fork, so I should look for them there when I could go again.

The second time I went up there – three sons and two daughters-in-law – and three grands were present and it seemed a good opportunity for a little talk about spitting and tobacco using in general as Nancy Ann was making a little puddle at the back of the chair – right at the foot of the bed – and the fourteen year old grand had a lump in her cheek and was expectorating thru the door. Old Arch said he no wise liked it but She (Nancy Ann) wouldn’t listen to him. I suggested that Nancy had been so pert in getting the Dr she surely had grit enough to spit in the fireplace rather than on the floor- and I had several tales to tell about old people who had given it up by the grace of God. On the way down to Clover Fork, Rose – wife of Hiram who is a semi-invalid with an inoperable double hernia – walked down with me and told me about the fire that had burned their cabin – and how they barely escaped being burned up with the young’uns – and saved nary a thing.

I promised to go and see them sometime so I made the head of Clover Creek my objective at the next visit and as it was a case of loss by fire [I] thot [sic] it quite a legitimate bit of neighboring to take them some clothes.

There were two boys of twelve and fourteen by Rose’s first husband – a daughter by Hiram’s first wife and four little tots: of eight years, Essie – six, Willie who has fits – four, Hanse and Amy two – and another expected in Jan. With that memoranda in mind I had something for each and when I finally reached the cabin at the end of a mile trail over a ridge – I wished I could have taken a wash tub – a fine comb – a broom and a few other things that would assist in cleanliness.

Rose welcomed me with open arms and willy-nilly I submitted to an embrace. She eagerly offered to [feed] my horse and sent Essie to get a bundle of corn fodder for her. I was invited in, and a heap of beans in front of the rude fireplace showed what she had been doing, as she prepared them for drying.

She had been brot [sic] up in this same house that had been built by her father – a Mr Shepherd – but it had been used only as a stable for some years. Forced to find some shelter they had taken refuge there and relatives had given them a few things but everything was most pitiable – and the very dirty babies the most so – however Rose had the grace to apologize for that and went on to tell me how sick little Willie had been and how she had waited for me at the branch for three hours on Sun[day] when she thot that I might come.

Hiram had been convinced that to save his soul he should be baptised, so she had borrowed clothes for the young’uns and had taken them to some place where such a service was being held, and indeed Hiram had given up cussing. He had strained his back while trying to build a pig pen and had come to the Dr to find out whether it was appendicitis or not, but he had no money so was ashamed to ask for any treatment for it – and they could not do what the Dr had suggested about a hot sitz bath because they had no wash tub, but “Thank God” – Rose’s brother had loaned them a cow so now she had milk for the little children…and was it really dirt that caused children to have worms? Well, she would try to have them clean when they were eating – “You are looking at the nits in my hair – I haven’t had a fine tooth comb since the fire…Yes, it must have been set by someone who had a grudge against us – and I didn’t even get the little money we had saved up.” “Yes, Hiram is reading that little Gospel you gave him and I am reading it too. My first husband taught me and my two sisters to read after I was married – and I mean to have my children learn to read.” “I do wish you would let me get you something to eat. It won’t be much but I’m not stingy!” “No thank you, I have some with me and you have already fed my horse” said the doctor.

We sat out in the sunshine as it was a chilly day, and she shivered having nothing on much and she said – “I’ve stopped smoking since you gave us that talk, and I don’t chew anymore except when my teeth ache”, and she showed me the miserable snags. And Rose can’t be more than thirty years old!

She was so grateful for the clothes. She said, “Oh see here chilluns. It’s a great big Christmas present, you will be clean after this if I have to put you to bed to wash your clothes, and I’ve got nothing but a lard bucket in which to wash them.” To the doctor – “Many’s the time I’ve put them in bed naked while I washed their rags” – and at that moment there was no other name that described them.

Finally I got away, leading Swallow down thru the tangle of blackberry canes – again to the trail back to Big Leatherwood, eating my little lunch with thankfulness as I rode thru the still forest – but pondering in my soul how to help Rose and Hiram and all the little chilluns to some more abundant life.

On Beech Fork I found the old people in an old cabin not far from son John’s. Nancy Ann’s eyes were better but old Arch was having a bad spell and “needed some heart tablets” so he said. He was huddled under the covers; a nasty old cap protected his head from the flies. Nancy Ann had cobbled up some sort of a stool for a commode and strewed sand on the floor in front of the bed. She said she cleaned it out every day but the day was far spent and it was enough to make a well person sick to sit there. Nancy Ann began to complain about not having anything but Arch hushed her up and said, the Shepherds shared their buttermilk with him and as long as Nancy Ann could go and bring it he could live on that. John’s wife came over with four children and thrusting a pale five year old forward said, “What makes that one so ill favoured?” A little questioning elicited the fact that she had worms, and when I mentioned it she said, “Yes, my chilluns are all wormy.”

It seems they had heard from the runaway daughter who had written for Nancy Ann to come and wait on her when she was confined, indeed she wanted to be brought back to her mother for that event, tho’ her sister Lucindy’s husband would be arrested for bigamy should he come back, but he had good work in the mine at Appalachia and could send them money. The Dr urged Nancy Ann to attend to her old man and leave the daughter in Appalachia to be taken care of in the hospital belonging to the Coal Company.

On the way down I had seen two of Lucindy’s children, Sally and Judy. They had four lard pails full of pawpaws.* Wouldn’t I have some? said Sally. And how is the Least One, said the Dr. “Oh, he’s pretty puny”, said Sally rather cheerfully, “his guts are out” and “John got bitten six times by a copperhead and his leg swelled up as tho it would bust but he got better”. “Have you got your quilt top done” said the Dr who had taken them some quilt pieces the month before. “No not quite – but a right smart bit.” When she goes again the Dr must take some batting and a back for the quilt – Poor Lucindy!

One gorgeous moonlight night came Bertha and Everett to get the doctor for their sister. They had been down the creek for John’s mother and sister, and John’s brother had gone for Grannie Shepherd, but the women were afraid so hurried them up the creek for the doctor. Getting ready as quickly as possible while Mr S got Swallow ready, I wondered what he and Margaret would have for breakfast if I did not get back, as there was no bread. But the bread set out the night before was up and hastily pinching out a pan of rolls and molding the remainder into loaves left it for Darby to bake – and accompanied the children down to Coyle Branch, a half mile up which lived Mrs Martha in the tiniest cabin perched high up on the side of the very narrow valley and not far from her mother’s cabin which they had built not twenty years before, clearing the forest from the few steep fields. The party was well attended by relatives and well advanced so it was not very long before a beautiful baby girl was born and everything went off as it should, although it was a surprise party to them all as they had not expected it for a month. Simply a missed calculation as it was quite normal in every respect. Martha had prepared a change of little garments herself and had the money in reserve to pay the doctor’s fee of $10; the first time this has happened so she was somewhat elated as she returned about 9 o’clock. A breakfast had been served in the tiny lean-to of a kitchen. The usual fried chicken and gravy, fried potatoes and biscuits, and coffee.

Martha is proving a good nurse to baby Gertrude. “I can just see her grow from day to day,” said Martha. “I aim to get a basket for her tho’ we hain’t never had a separate bed for any of our young’uns.” This is her third and her mother has eight. She is still very young and her “least one” is such a wee thing.

Bertha has stayed by and cared for Martha and two year old Bethel, so she has had a proper convalescing period and, “Baby just sleeps all the time”, nursing only three or four times in 24 hours as a proper baby should.

Other incidents of the month have been interesting but I fear your patience has already been exhausted by this long scrawl.

I pray you all, to think love and joy to all “the least of these Little Ones”.

[*pawpaw – the fruit from a “pawpaw” tree. Asimina triloba or “pawpaw” tree is a small tree native to eastern North America. Its edible fruit is very fragrant and pungent in taste.]