STAPLETON REPORT – February 1931
“It has been rather a nice month. After the fine clear days in January …” 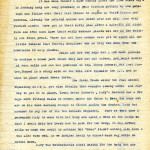 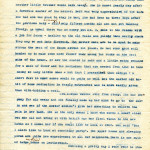 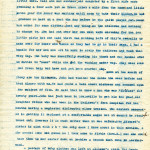 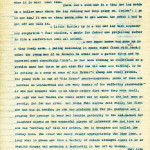 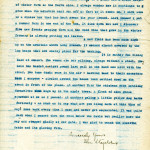 February 1931
Dear friends:-
It has been rather a nice month! After the fine clear days in January many are busy grubbing in good earnest putting up new palings and fixing over their rail fences to tighten up their fields and gardens. Already the potato onions and onion sets are put. Some very forward minded have put in their early peas, after a splendid all night rain and even some have their early cabbage plants set out as the variety are frost proof. There has not been enough rain yet to start all the little runlets that formerly surprised one as they ran down from the mountains in many places.
Sudie and her two boys Ned & Rob made palings to enclose a house yard which they had not had before. Hen, built several rock walls and set new palings on top. Henry Cornett, our Post Master, fenced in a stony acre on the hillside opposite the P O and he aims to plant peach trees there.

The Cabin fence along the road needed repairing so Mr S got wire fencing then engaged Johnny Lewis and Finley to put it in place. Young Henry Cornett, Mary’s husband had a few days work fitting rails or stones under the fence to keep the hogs out and on his side earning enough to finish paying the doctor. Mary had managed to pay six of the ten dollars required. Just at that time I persuaded Mary to come with her baby and spend a week at the Cabin so that I could help her learn how to care for the baby. It was having colic so much she could do nothing but “nuss” it. Her mother, Sara Jane was also worn out. So we invited Henry to dinner each day while he worked here.

Mary was enthusiastic about caring for the baby but she could hardly endure her crying a minute. Frequently I would insist on her waiting five minutes before she picked her up and by that time baby would stop herself. However the urge to hold the child is so strong it gets very little discipline.

Another baby arrived on Line Fork. Bert has two daughters then four sons so this new little daughter – Bert calls them kids – is rather more interesting to Loretta and Nancy than another little brother would have been. She is named Pearly May after a favorite sister of the mother. Bert was very appreciative of the care she had and was glad to stay in bed. She had been up three days after the previous baby arrived – still only fifteen months old and not yet walking freely. As usual there was no money but Mr S came to the rescue with a job for Jason – hauling up the old rails and piling them neatly where they may be cut into firewood. The better ones are to be used to make strong the rest of the fence around the place. He had some good soil hauled up to make some more flower beds among the rocks on the west side of the house. So now the doctor is paid and a little extra remains for a sack of flour and the medicines that are needed from time to time among so many little ones – not that I prescribed them always – a short fast in most cases would do quite as well but the castor oil habit of home medication is deeply entrenched and is more easily given than with-holding a meal.

Mrs Morgan walked over from Stony. She had been puny for six weeks and she finally made up her mind to go to the Cabin and see if the doctor couldn’t give her something to relieve the pain in her back. She is the only woman I know who chews a snuff stick but she did not bring it with her. It was her first visit to the new Cabin so I asked her if she would like to look it over. She said, “Yes I alors like to look at something purty”. The upper rooms and sleeping porch are quite new experiences to all our neighbors. There is one rather large two storied house on Leatherwood.

Choosing a pretty day I rode over to Stony to see Mrs Morgan and she said her back was much better. “It must have been the pills you had given as nothing else had helped it”. Their house is some six steps above the road. The bank had been held up by an eight foot wall part of which had been down for over a year. I expressed a hope that Mr Morgan was going to rebuild it this Spring. She thought he would as he had ordered two bags of cement.

At the next house I went in for a half hour with Susan and her family of five little ones. Will and his sixteen year old daughter by a first wife were grubbing a four acre lot on Green Briar a mile from the house and little seven year old Homer was waiting until noon to take their dinner. He had grubbed so hard on a root the day before he was quite played out. Susan had asked for some clothes – “Just anything” – as the children had nothing to change to. She had cut over her own well worn clothing for the two little girls but she said there was nothing left of Will’s overalls to make over for Homer and Fernando so they had to go in their rags. I had a bundle for her and she set to work to strip the children and wash that very day. The baby was cheerfully sucking his thumb and was handed over to Hattie to “nuss” while she got the washing under way. They need some Red Cross help but have not yet been awarded any.

Down at the mouth of Stony are the Hibberds. John had visited the Cabin the week before and took dinner with us. We had quite a talk about sickness and touched upon the subject of fits. He said that he knew a man who was “fitified” for twenty years. John had just been to Louisville to get his ten year old daughter Vernie who had been in the Children’s free Hospital for ten months having a neglected dislocated elbow treated. The doctors succeeded in getting it replaced at a comfortable angle but it cannot be straightened out. However it is much better than it was before. Mrs Hibbard’s sister is sick with Tb – the only case I know about in this section. She needed some bed gowns so I took some to Firbie (Mrs H) and she would take them to her sister down on Beehive a branch that runs in Leatherwood.

A package of baby clothes was left at Allison’s store for Coude Cornett, after I had had dinner with the Hibbards and Swallow a bundle of fodder. Here I turned up Leatherwood and called at the big house where they were having a quilting in one of the upper rooms. Four women were working on a pattern called “Robbing Peter to Pay Paul”. The men had a log rolling while preparing some new ground. Dinner was just over but wouldn’t I have some. They are most hospitable about offering food when it is near meal time.

There was a sick man in a tiny new log cabin in a hollow near where the log rolling had been going on. Wouldn’t I go to see him? It was so steep going down to get across the creek I had to get off and walk it.

A little farther up is a big new log barn approaching completion – four stables, a gable for fodder and projecting rafter to form a comfortable shed all around.
A new board house had gone up in a tiny rocky acre. A paling enclosing it comes right flush with the road. I asked the young man if he thought he could make a garden there and he answered most cheerfully “Sure”. He had been working in Cumberland as a section hand but there he got sick for the old home and farming. So he is putting in a crop on some of his father’s steep and rocky ground. His young wife is one of “Mis Gross” granddaughters. Three of them are married on Leatherwood and are very tender of the suffering grand-mother who had brought them up as their mother died when they were small. She said she had feared she would never see me again as she has been so poorly. But God had given her three full nights rest really the first she had had in months. So she was praising Him for His goodness and praying for courage to bear her trouble patiently to the end. Hannah her daughter showed me two wonderful pieces of patchwork she had done as she was “setting up” with her mother. One is hexagons and called The Cowboy Band. The other was named rather appropriately The Pine Cone. A long oval in green and then a variety of colors arranged about it in irregular shapes but assuming a regularity in the set up blocks.

They live at the very head of Leatherwood and the road slopes or rises on a long slant to the top of the ridge and then Long Branch brings one back to Line Fork and Pine Mt Ridge. Looking closely for signs of Spring I saw the greening buds of the beech trees and two patches of the shy arbutus with tiny buds. In one particular fruitful holly tree I was delighted to see a pair of blue birds feeding. They looked so pretty among the red berries. One great rock that rises steeply to a point had a large carpet of winter fern on the North side. I always wonder how it continues to grow when the moisture must run off as fast as it comes on. I have some in a window box that has kept green the year around. Last Summer I put a Summer fern in one end of the box. It died down but now I discover five new fronds peeping thru and the wood vine that grew in the winter fernery is already putting out leaves.

A new field has been made high up the mountain above Long Branch. It seemed almost covered by the log heaps that are neatly piled for the burning.
It is rather fun riding back at sunset. The women are out milking, always without a stool. They hold the bucket, an eight pound lard pail in one hand and milk with the other. Two tame ducks rose in the air – harking back to their ancestors I suppose – circled around the house then settled down on the creek in front of the place. At another farm the chickens were settling themselves high up in the apple trees. A flock of nine geese squawked at me as I passed. At another paling a little yellow dog barks furiously – as much as to say what are you doing here at this time of day? Some bark every time I pass and never get acquainted. It was quite dark when I passed thru the wood below the Cabin but Swallow knew the way and stopped gladly at our gate. I was glad to reach the cheerful Cabin and its glowing fire.

Sincerely yours
The Stapletons