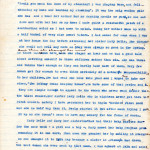 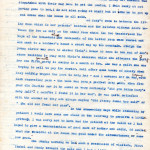 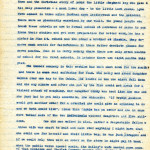 The other morning when Isabel brought the milk she requested shyly “Would you mend the knee of my stocking? I was playing base, and fell – skinning my knee and busting my stocking”. It was the only woollen pair she has and I knew her mother had no darning needle or yarn, so she sat down and with her leg on my knee I made quite a successful patch of a contrasting color as I had none to match. Nancy her mother came up with a half bushel of very nice sweet taters. I had asked for some when I was at her house the day before attending her sister Mary Belle. She thought she would not sell any more as “they were always so good in the Spring” and then she changed her mind. As there was no one here, she stayed an hour and we had a good talk about devoting oneself to three children rather than six. She has three and thinks that enough as they can hardly take care of them. Very few women get far enough to even think seriously of a mother’s responsibility to her children. She had read one book this year and I urged her to take another, “The Bobbsey Twins Keeping House”. We have some of that series and they are simple enough to appeal to the women who never read farther than the third reader. Her sister Mary Belle who is eighteen never got through the first reader. Lately I have persuaded her to begin “Mother’s First Book” and she is halfway thru it. Neely started it but after much trying I gave it up as she doesn’t seem to have any memory for the forms of words.
Mary Belle and Mary her sister-in-law had their baby parties during the same week – a girl and a boy. Mary named her baby Evajean pronouncing it as one word. Then someone pranked her by calling it Evergreen so she changed it to Zulu May because a sister in Arizona had known “the best woman she ever seed” by that name. I was aghast at Zulu and asked Mary if she had not heard of the Zulus in Africa. She reckoned she had but she had forgotten about it. Sara Jane her mother was suggesting Lilian May in preference to Zulu and so it was decided. Mary had wanted to have her party at the Cabin and I very much wished it but after a hard day at the wash tub and paddling the clothes because she could not stoop over to rub, she was taken along about ten o’clock when the family had been retired about two hours. Henry her husband was dispatched with their nag Bess to get the Doctor. I felt lucky at not having gone to bed. I do not mind going at night but it irks me to get up and dress when the house is all cold.

As Mary’s room is between the living room which is her parents’ bedroom and the kitchen without doors between the two as well as the other room where the two teachers and the boys of the household sleep, the occupants of the latter room were routed out and sent to a brother’s house a short way up the mountain. Evelyn [Ethel] the young sister was sent to sister Viola’s house or room in one end of Hen’s store building to stay with Viola’s children while she attended the Party. Her own fifth, yes sixth party is coming in a month or two. She has a quilt she was trying to sell to pay the doctor. Well after some hours of misery when Mary audibly begged the Lord to help her – and I assured her He was helping with each succeeding pain – the babe was born, a perfect “Baby Doll”. When five year old Charlie saw it he asked me very seriously “Did you bring Mary’s Baby Doll?” I said, “No I found it in her bed”. He was quite satisfied with the answer as they are always saying “Old Jersey found her calf” or “The old sow found her pigs”.

In the succeeding days while attending my patient I would have someone stand in the door-way to preserve a little privacy. I was sorry not to have had the patient at the Cabin as I had hoped to give a demonstration of good care of mother and child. Of course what she received at the house was good under the circumstances, “somehow good”.
One Sunday morning we had such a succession of visitors. First Isabel and Mandy brought the milk and I had a little S S lesson with them. Then came three of the Hall children with Loretta. Just as Mr S got started on the lesson, Liza and little Carter from Clover Fork came. These had come after our Christmas on Line Fork had passed. Asking the children whose birthday we celebrated at Christmas, one little boy whispered shyly “The Lord’s”. They liked the songs that Mr S sang for them and the Christmas story of David the little shepherd boy who gave his only possession – a much loved dog – to the little Lord Jesus. Lynn Fork school is three miles farther down Leatherwood and the children there were pleasantly surprised by our visit. The young people who teach these schools go now to Normal school at Morehead or Berea to continue their studies and get more preparation for better work. One has a sister in Pine Mt school and the other a brother at Blackey. They deserve much credit for faithfulness in these rather desolate places for seven months. This is in Perry county where there are only seven months of school for the rural schools. In Letcher there are eight months this year.

The lumber company in this section has been shut down for two months and there is much real suffering for food. Old Sally and granddaughter walked over one day to the Cabin. She looked as tho she might fall down and die any minute and after she sat by the fire could not speak for a violent attack of coughing. Her daughter Cindy was took like she was and she just had to get help somewhere. She whispered “If Orphie Jackson could get another order for a coverlet she could give me spinning to do and we both could live”. Since then Orphie has an order and she is once more taking care of the two individual widowed daughters and five children.

One old man walked in also. Rather a respectable fellow whose wife was smart to knit and make over anything she could use for herself and their little boy. He was just “strapped” and if we could help them with an order on the store he might pay it back when the public works opened again. Kim Bailey’s wife needed some more of that medicine and Charley Cornett wanted some clothes for his children. But I knew he does not really need help so had to be refused. Bessie Witts mother came from Leatherwood one very sloppy day and said they were all out of everything but corn meal. They had made a crop and a little loan of six dollars would do them a month and they promised faithfully to pay it back.