Letterhead displays name of Philip Roettinger in Wyoming, OH, who writes to Henry about his activities. He and Ethel visited Dick in Wooster [OH], while Stanley visited Phil in Delaware [OH]. They met Dick’s roommate, attended a football game, and the annual dance. He describes Phil’s accomplishments at Delaware, then the weather and his gardening. The letter is signed “Uncle Philip”. As a postscript, he asks about Elsie and her family’s relocation to Louisville area. 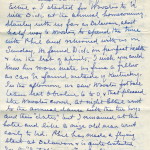 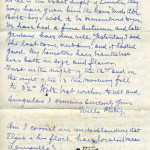 Last Saturday, quite early, Ethel & I started for Wooster to be with Dick at the annual homecoming. Stanley [went] with us far as Delaware [Ohio], about halfway to Wooster [Ohio], to spend the time with Phil and returned with us on Sunday. We found Dick in perfect health & in the best of spirits. I wish you could know his roommate, as fine a fellow as can be found outside of Kentucky.

In the afternoon we saw Wooster football team beat Oberline 6 to 0, & that pleased the Wooster crowd. At night Ethel went to the annual dance with the two boys and their “dates”, but I remained at the hotel and like a nice[underline] old man went early to bed.

Phil has made a flying start at Delaware & is quite contented. In the “Intelligence Test” which is conducted by the faculty to learn what the boys know generally, the things in which they are interested. The manner in which they express…

…themselves [?] Phil led the class of three hundred with a grade of 96 out of a possible 100. That makes us proud of him. As he is the exact height of Lincoln the boys have given him the name “Uncle Abe”. Both boys wish to be remembered to you.

We have had a fine autumn and late gardens have done well. Yesterday I had the last corn, nubbins, and it tasted good. My tomatoes have been the best ever both in size and flavor. Frost in the night of the 12th and in the night of the 13th. The mercury fell to 32. With best wishes to all and singular I remain sincerely yours,
Uncle Philip

Am I correct in understanding that Elsie & her flock have located near Louisville? [added in a different hand and ink: “418 Ottawa Louisvillle”]