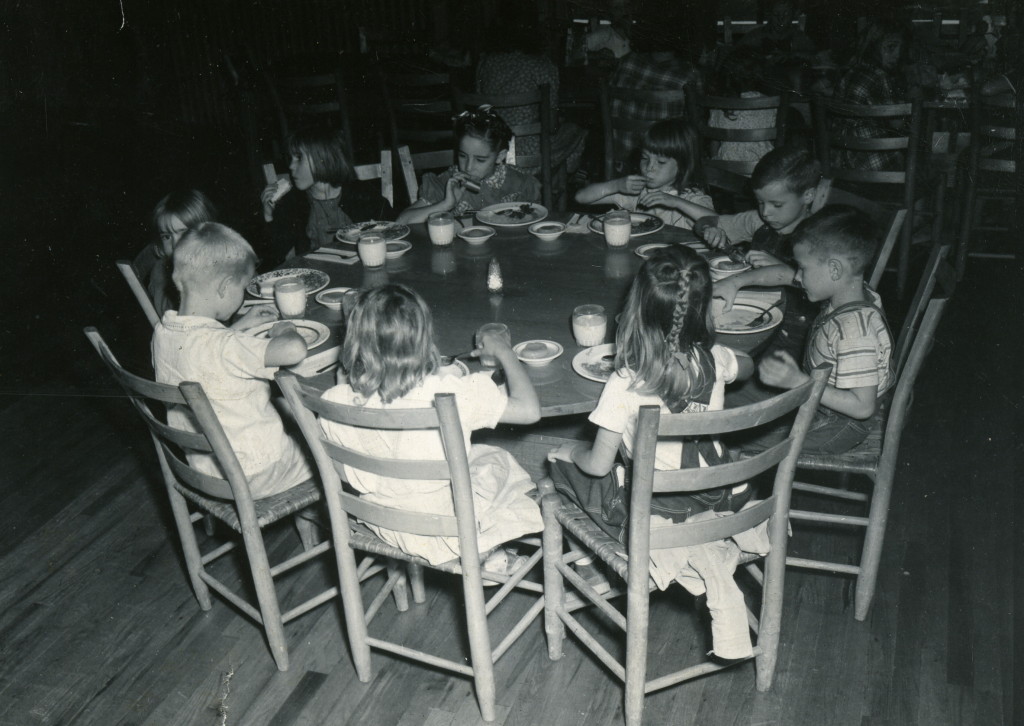 Over the years table manners were taken very seriously at Pine Mountain.  As all meals early in the School’s history as a boarding school were served “family style” at large round tables that could hold up to eight students.  The need for decorum in these group settings was soon evident.  In these earlier years when young children made up the majority of the population, the need for supervision at each of the tables was evident.  Each table included a staff member who would model table manners and would remind any child whose comportment was lacking, that there were better behaviors to strive for. Soon rules were instituted for table behavior and amended over the years to accommodate behaviors that “came along” with new populations and older students. One of the most egregious offenses was “putting your knife in your mouth” or “eating with a knife”.

“I like my peas with honey
I’ve liked it all my life.
It makes the peas taste funny
But it keeps them on my knife!”

This ditty was often quoted with humor by many Pine Mountain students and no doubt called to mind the admonishment of NEVER eat with one’s knife. Never put your knife in your mouth!

Another table rule was that no matter how bad the food tasted to the student, they were never to complain about the food.  A recurring tale is told of a student who was having trouble with the new food he encountered at the School.  In  the kitchen, a small bar of home-made soap had somehow slipped into a soup pot and the soup found it’s way to the table.  A young man at the table took his first spoon-full and exclaimed, “This tastes like soap!” Silence and startled looks greeted his exclamation.  He quickly recovered, again exclaiming, “And, that’s just the way I like it!”

Every student at Pine Mountain Settlement was expected to also abide by what was called the “Three Bite” rule. The rule mandated that any food placed in front of the student was expected to be sampled by the student.  They were to take at least three bites of the “new” food and failure to do so was duly noted by their fellow students as well as the staff.  Failure to comply resulted in an end to the meal for the student. Many students would later say that was how they learned to like food unfamiliar to them.  Some recall this “Three Bite” rule with less fondness. Canned chard never became a favorite and there were many plots and maneuvers to avoid eating this limpid vegetable.

Certainly the three “rules” noted above, seem reasonable for those early years, but those examples are only three of 39 rules associated with dining at Laurel House that were mandated in 1921! Some of the 39 were not so reasonable.

The documented rules were addressed to those dining as well as those serving the tables.

By the late 1930’s some of this early discipline began to break down as the age of the student crept upward and some began to assert themselves or insist on their learned habits.  In a memo from Glyn Morris, Director dictated to his secretary Fern Hall, he sends notes to staff charged with overseeing the Dining Hall in Laurel House. In this case the note is to John Spelman III. It reads

Mr. Morris requested that we watch the conduct in the dining room.
He mentioned such things as:

Dietitians rule at Pine Mountain. The Kitchen and the services associated with feeding students are unrelenting and critical to over-all well-being of the School. Attention to the dining decorum at the School was often front and center and there are several documents that spell out the rules of the table and one of them, importantly, is “Be polite to the cook.”

One of the longest reigning dietitians at Pine Mountain was Berdina Bishop.  Like many of the women who assumed this role at Pine Mountain School, she was not trained as a dietitian but quickly showed her skills at this complex task. She writes in her dietician notes of the experiences in the kitchen. Her notes, found in a large scrapbook and an album she donated to the School, and in the gathered reports she was required to submit regularly to the Director, demonstrate her eye for detail.  Her large Scrapbook contains many of her memories of her Pine Mountain years and it is within this tome that we find some of the records she kept of her kitchen years. Her records and reports to the Directors she served are found scattered throughout her record. The reports to the Director also provide a cost accounting of foodways at the School. Her reports join those of dieticians who preceded and followed her and track the growing cost of feeding students and staff at the institution.

Other notable dietitians include Bertha Cold, sister of Edith Cold; Georgia Ayers Dodd; Chloe Hayes-Bunch, and others. During the two World Wars, several staff, such as teacher Louise Fliermans, were given that difficult task with little preparation. Much more may be learned about the Dining Room at Pine Mountain and ettiquite and manners by consulting the various biographies of those who worked in the kitchen and dining area.

DINING IN THE COMMUNITY SCHOOL YEARS

During the Community School years (1949-1963)  at Pine Mountain, dining began to more closely follow that found in grade-schools throughout the country.  However, as can be seen in the photograph that introduces this blog, the tables were still set for dining with plates, saucers, silverware and napkins properly places for each student. Each child would take their plate through a “cafeteria” line where they received the main offering of the day. 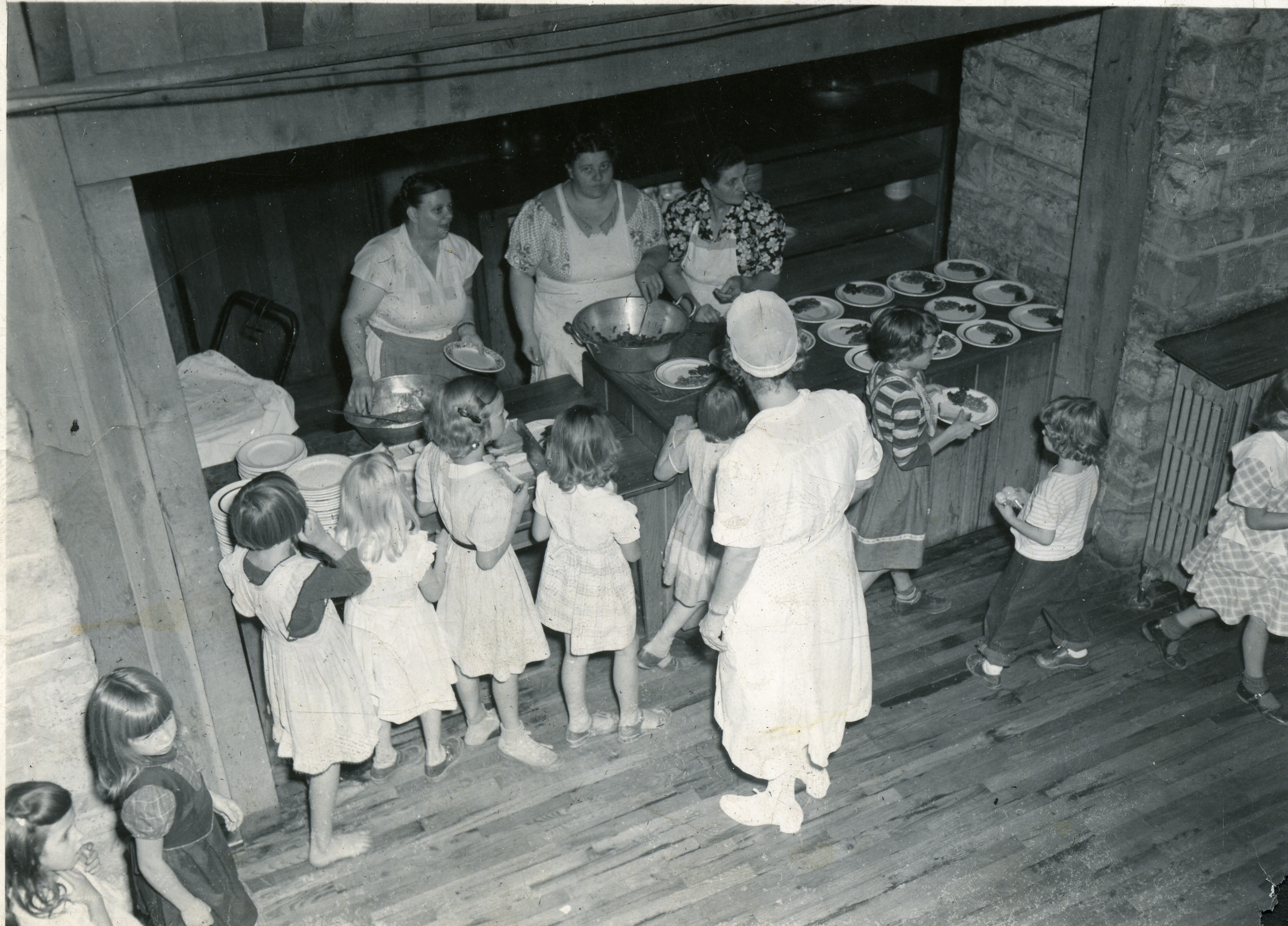 What is missing in the later years is the presence of an adult at each table.  Modeling behaviors and monitoring eating habits was done at a distance. At a long table, seen in the background of the photograph, some of the staff may be seen. The placement of students and staff today who gather as part of the very active Environmental Education programs at the School, looks much as it did during the Community School period.  One of the noticable differences today is the use of sectioned cafeteria trays used by all diners. All visitors and staff continue to bus their dinner ware.

In the dining room the beautiful multi-purpose tables from the very earliest years are still in constant  use. The tops of the tables tilt to full upright and becomes a seat which can then be used on the dance floor when folk-dancing is introduced following the meal. The hickory cane bottomed chairs are still found throughout the dining room.  Notoriously easy to up-end, the chairs now are more frequently heard hitting the floor as children are more accustomed to heavier seating. Another observation is that the noise level of the children has gradually increased and echoes off the walls of the dining room.  The excited and animated conversations are also often punctuated by some child leaning too heavily on the tilt-top of the table causing it to “slap” back down on the base. As children compete to be heard, the loud voices fill the room. The auditory experience in the dining room has changed dramatically from the earlier years when children were quickly quieted. Shouting and raising the voice in the dining room was monitored by all present and quickly corrected by staff and by the children themselves. 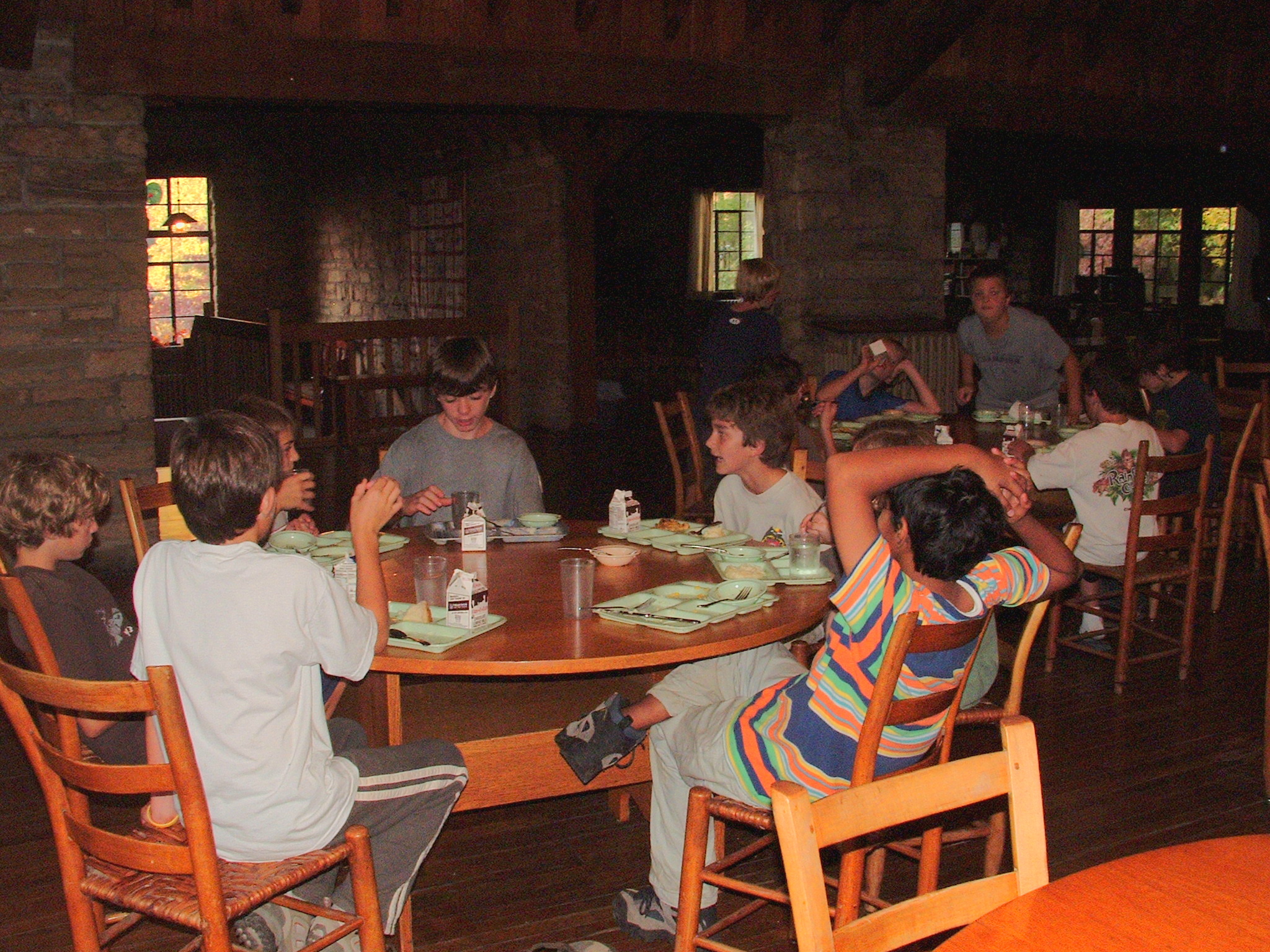 While the 3-bite rule has faded away for most children dining at Pine Mountain today, another rule has been instituted. That rule is to refuse or not ask for food that will not be eaten. The food waste at the end of each meal for the student groups is scraped into a special bin and the scraps are weighed for each visiting school for each meal. Remarkably, the Gospel of the Clean Plate ideal has been reach by some remarkable school groups that have had “0” waste at their meals and have set a record for other schools to emulate. Further, each student in today’s dining hall is asked to bus their own tray and to assist the kitchen staff in the important job of sweeping floors, cleaning tables and straightening chairs after dining. Katherine Pettit is probably smiling at this continuation of individual disciplined responsibility which she attached to every activity. 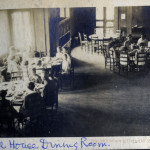 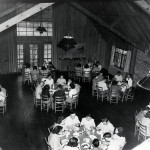 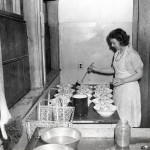 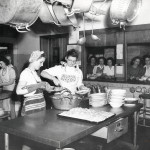 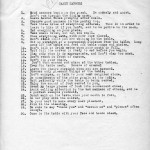 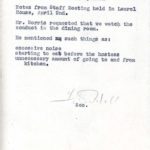 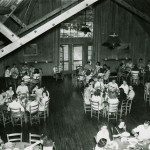 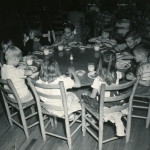 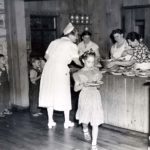 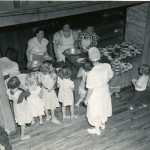 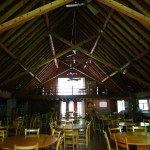 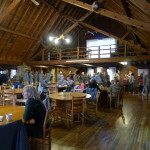 DANCING IN THE CABBAGE PATCH   About

DANCING IN THE CABBAGE PATCH  I Guide

DANCING IN THE CABBAGE PATCH  In the Garden

DANCING IN THE CABBAGE PATCH   Dieticians

DANCING IN THE CABBAGE PATCH  In the Dining Room, Manners and Etiquette

DANCING IN THE CABBAGE PATCH  Gospel of the Clean Plate

DANCING IN THE CABBAGE PATCH Guide

DANCING IN THE CABBAGE PATCH Guide

DANCING IN THE CABBAGE PATCH I  About

DANCING IN THE CABBAGE PATCH  Farm and Dairy Early Years I

DANCING IN THE CABBAGE PATCH Cows

DANCING IN THE CABBAGE PATCH Going and Coming Back I

DANCING IN THE CABBAGE PATCH Going and Coming Back II

DANCING IN THE CABBAGE PATCH Laden Trail or The Road

DANCING IN THE CABBAGE PATCH  Maple Syrup and Sugar

DANCING IN THE CABBAGE PATCH Poultry

DANCING IN THE CABBAGE PATCH  Sorghum Molasses Stir-Off I

DANCING IN THE CABBAGE PATCH War and PMSS

DANCING IN THE CABBAGE PATCH Weaving